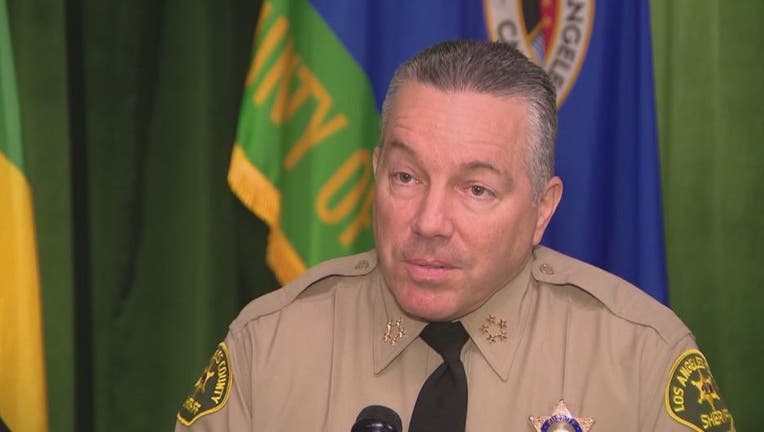 LOS ANGELES COUNTY, Calif. - The call by the Los Angeles County Democratic Party for Sheriff Alex Villanueva to resign is part of a "radical agenda," a Sheriff's Department spokesman said.

"Yesterday, Sheriff Alex Villanueva began solving the homeless problem on the Venice Boardwalk, while simultaneously conducting the largest illegal drug bust operation in the history of the department," Capt. John Satterfield, a spokesman for the Sheriff's Department said.

"Violent crime rates have nearly doubled, yet for some strange reason the radical left activist crowd has decided defunding the police is a good move," he said.

"The LACDP calling for the sheriff's resignation is part of this radical agenda, evidence they have been hijacked by the far left, and a distraction. The sheriff will continue to remain focused on public safety, creating solutions and serving our communities.''

The Los Angeles County Democratic Party Central Committee voted Tuesday night to call for Villanueva to resign, saying he has failed to rein in "long-standing problems within his department."

The vote came 10 days before the first anniversary of the fatal shooting of 18-year-old Andres Guardado by a sheriff's deputy in an unincorporated area near Gardena.

Andres Guardado, 18, was shot in the back five times by sheriff's deputy, family autopsy finds

Family outraged after teenager shot by deputies in Gardena

"Accountability has long been one of the foundations of democracy,'' Los Angeles County Democratic Party Chair Mark Gonzalez said Tuesday. "As voters, we have an obligation to hold our leaders accountable for their actions, and as the Democratic Party, a responsibility to ensure that our elected officials are upholding our ideals and principles."

"Los Angeles Democrats stand in solidarity with the Guardado family, recognizing the systematic brutality of law enforcement that has continued to shake our county. Leadership and accountability start at the top, and while strides have been made to reform police culture in Los Angeles, it's simply not enough," he said.

"A failure to lead in Los Angeles is a failure to serve Los Angeles. We will continue to hold those accountable who fail to live up to their obligations," he added.

The Los Angeles County Democratic Party Central Committee endorsed Villanueva in his 2018 race against then-Sheriff Jim McDonnell, helping him become the first Democrat to win the nonpartisan office in 138 years.