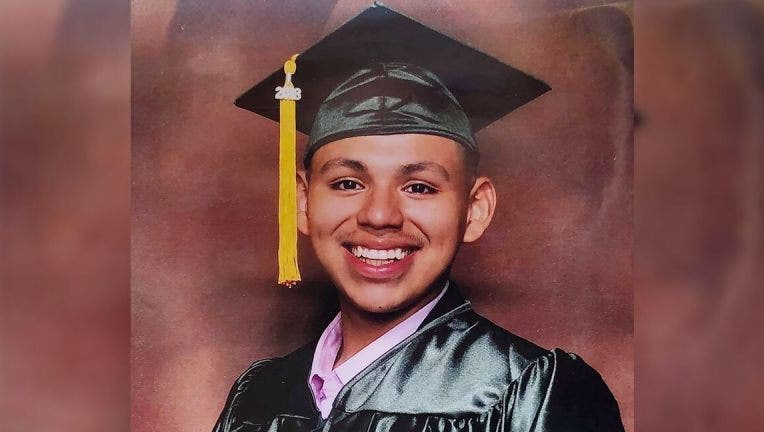 LOS ANGELES - The parents of an 18-year-old man shot to death near Gardena in June by a Los Angeles County sheriff's deputy have sued the county, alleging the lawman used unreasonable force and that he and his partner had "possible affiliations" with an internal Los Angeles County Sheriff's Department gang.

Elisa and Cristobal Guardado brought the wrongful death/civil rights complaint in Los Angeles Superior Court on Monday in connection with the death of their son, 18-year-old Andres Guardado.

An LASD representative could not be immediately reached for comment.

Guardado was shot June 18 at an auto shop on Redondo Beach Boulevard where he was working as a security guard, according to the suit.

Sheriff's officials say Guardado had no license to work as a security guard in California and was not wearing any clothing that would indicate such work.

Vega and Hernandez arrived at the auto shop and "in a display of unreasonable and excessive force, immediately drew their weapons and chased Andres down an alley in violation of defendants' policies and procedures," the suit states.

The complaint further alleges that Vega, without provocation, fired six shots at Guardado, five of which hit him in the back.

Guardado "never posed a risk" to the deputies and they had no reason to believe he had committed a crime, the suit states.

The suit further alleges that the LASD knew Vega and his partner were unfit to carry out the duties of a police officer and that each had a history of using unjustified excessive force, including improper discharging of their firearms.

The suit alleges that the LASD and Sheriff Alex Villanueva knew about deputy gangs within the Sheriff's Department, and knew that the deputies involved had "possible affiliations" with at least one of those gangs, including the Executioners and the 3,000 Boys.

Guardado's death has deprived his parents of his life-long love and affection, according to the suit, which seeks unspecified compensatory and punitive damages.

Sheriff's officials have said the patrol deputies were at the scene in a marked vehicle and saw Guardado speaking to someone in a car blocking the entrance to a body shop.

Investigators allege Guardado pulled out a handgun, then began running.

Deputies chased him and caught up with him in an alley, where the shooting occurred.

Sheriff's officials said a weapon was discovered at the scene -- an unregistered .40-caliber semi-automatic pistol with a polymer frame and no serial number, a Smith & Wesson slide and a prohibited Glock magazine.

Officials have said there is no evidence Guardado fired any shots.

A criminal investigation into the shooting is ongoing, and the results will not be made public until it is submitted to the Los Angeles County District Attorney's Office for review, sheriff's officials have said.

The FBI is also reviewing the case.

On Tuesday, the county's Board of Supervisors voted unanimously to ask the coroner to conduct an inquest into the death and indicated its plan to file suit against the sheriff's department for allegedly violating state law by failing to allow oversight of law enforcement investigations.

The board directed the county's lead lawyer to report back on the feasibility of a lawsuit within 10 days.