A commercial building was destroyed after a two-alarm fire erupted in Huntington Park on Tuesday morning. 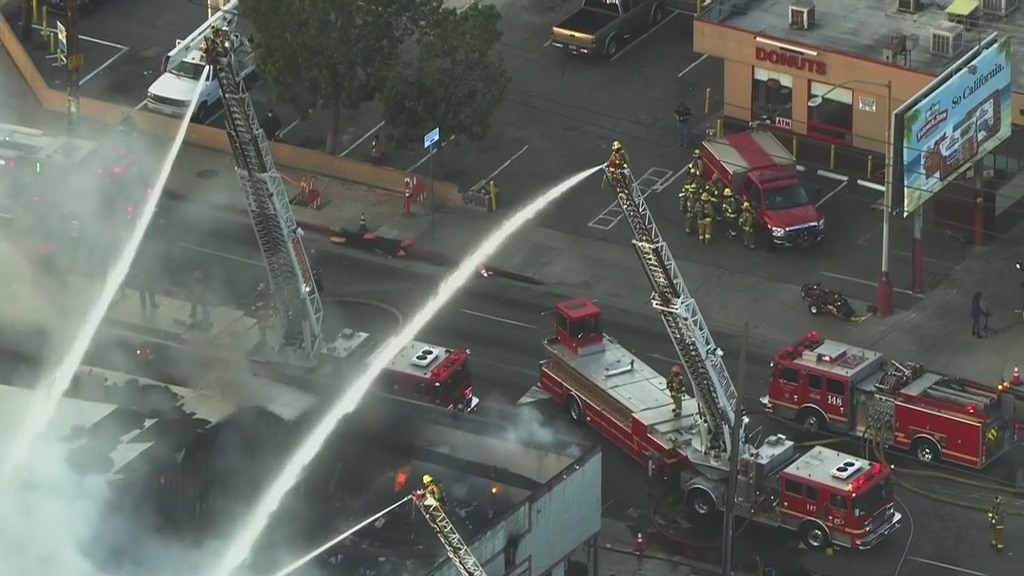 Firefighters were battling a two-alarm fire in Huntington Park

Crews were working to knock down a fire that erupted inside a building in Huntington Park.

Authorities are looking for the driver of a silver Scion tC who T-boned a Metro bus after they reportedly ran a red light in Huntington Park.

Three people were hospitalized after a hit-and-run crash involving a Metro bus in Huntington Park.

A suspect was spotted ditching their car after leading police on a high-speed chase across the South Los Angeles area.

A suspect who was allegedly armed with a knife was fatally struck by police gunfire in Huntington Park, officials said.

A large warehouse in Huntington Park was destroyed by a fire on Monday evening, fire authorities said.

A 32-year-old man was in custody on Tuesday on suspicion of murder. Investigators found the body of his mother inside a trash receptacle in the Walnut Park area, officials said.

The Los Angeles County Sheriff's Department held a news conference Tuesday, and their data shows car thefts have increased in the county during the COVID-19 pandemic.

After a long closure for coronavirus, a mother-daughter brow and skin studio is reopening for business.

A homicide investigation was underway after a man was fatally shot in a residential area of Huntington Park on Tuesday night.

A pedestrian has died after being struck by a vehicle Friday night in the area of Pacific Blvd near Belgrade Ave.

Two suspects connected to a shooting in Huntington Beach over the weekend are now in police custody and facing attempted murder charges.

Dozens of people may be injured Saturday after a utility pole exploded into flames at the Old World Village's Oktoberfest celebration in Huntington Beach, authorities said.

A middle school student was taken into custody on Friday after school police discovered she brought a gun and ammunition to school.

Orange County native and Vans US Open of Surfing champion Courtney Conlogue is looking to defend her title over the weekend.

A terrifying scene unfolded on a Sunday afternoon in Huntington Park. A witness recorded an out of control pickup truck barreling through the intersection of Wilmington and Gage Avenue.