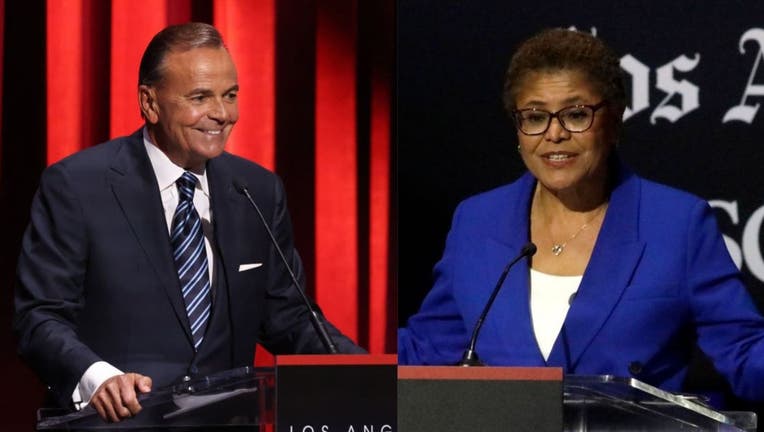 LOS ANGELES - Los Angeles will soon have a new mayor; it's a battle between real estate developer Rick Caruso and congresswoman Karen Bass.

Neither candidate cleared 50% of the votes, however, Caruso and Bass held the top two spots in the poll. They will now advance to the November general election. Caruso gained 41% of votes and Bass trailed behind at 38%.

Candidate Kevin De Leon will not advance after only garnering 7% of votes.

Caruso is a pro-business billionaire Republican-turned-Democrat who sits on the board of the Ronald Reagan Presidential Foundation and is promising to expand spending on police. He has a tough-on-crime approach and says what makes him different is that he is not a career politician.

Bass is a six-term U.S. Congresswoman, represents California's 37th congressional district, is chair of the Congressional Black Caucus and was on then-President elect Joe Biden’s shortlist for vice president. If elected, Bass will become the first woman to hold the office and the second Black person.

Rep. Bass will face off against billionaire Rick Caruso in a November runoff election in the battle for the next mayor of Los Angeles

Focusing on one of LA's major problems: crime, as mayor Caruso plans to hire 1,500 additional officers and lead with community policing. About 20 years ago, when Caruso was president of the police commission, he said he helped reduce crime by 30% by reversing the course of the LAPD and hired 800 officers.

"My final argument is the same as my opening argument: we have a bunch of issues in this city like crime and homelessness and corruption and city hall that need to be fixed, and I believe I have the skill set to fix them. I'm more excited than ever to do it. I'd be honored to be the Mayor. I'm energized by going around this city," Caruso said on The Issue Is.

Bass’ take on crime focusses on crime prevention and building safer communities. She said while addressing the crime of today is important, her focus is to prevent crime from even happening.

The most important issue among voters is homelessness. Caruso said on day one he'll declare a state of emergency and move the authority into the mayor's office. Caruso said he plans to build 30,000 beds in his first year.

Bass said she would declare a local state of emergency on day one. She plans to house 15,000 people by the end of her first year. Bass' campaign has also highlighted her work as an activist before holding elected office. In 1990, she founded the nonprofit Community Coalition, with the goal of transforming social and economic conditions in South Los Angeles.

Bass, 68, is a favorite of the party’s progressive wing, while Caruso, 63, is a political shape-shifter who calls himself a "centrist, pro-jobs, pro-public safety Democrat." He is the developer behind The Grove, Palisades Village and other shopping centers.

According to government records, Caruso was a Republican for over two decades before becoming an Independent in 2011. Caruso changed back to Republican in 2016 — a year when he served as California campaign co-chair for Republican John Kasich’s presidential bid — and then to independent again in 2019. He became a Democrat shortly before entering the mayor’s race in February.

What issues are important to LA voters

LA City's Joe Buscaino, Mike Feuer and entrepreneur Ramit Varma dropped out of the race for LA Mayor after months of campaigning. Their names still appeared on the ballot because all three dropped out after the withdrawal deadline.

Mayor Eric Garcetti served as LA's mayor since 2013. In July 2021, Garcetti was nominated by President Joe Biden to be the U.S. ambassador to India however his confirmation was put on pause due to an investigation against his former aide Rick Jacobs.