FOX 11 teamed up with USC Center for the Political Future and the LA Times to host a debate between Los Angeles mayoral candidates.

LOS ANGELES - The race is on to find the next mayor of Los Angeles.

Several candidates are eyeing the seat that was held by Eric Garcetti for the past eight years.

Below is the full video of Tuesday's debate: 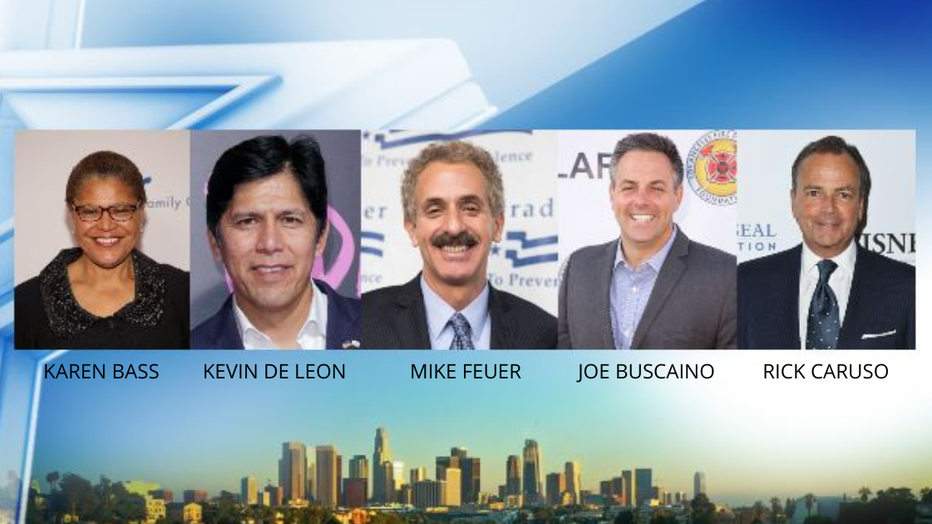 The candidates took part in a live debate hosted by FOX 11, The Angeles Times and the Dornsife Center for the Political Future Tuesday night. The candidates were asked a number of questions focusing on hot topic issues facing Angelenos, such as homelessness, housing, the economy and much more.

Below is a breakdown of how each candidate answered the question.

Rep. Karen Bass said she would declare a local state of emergency on day one. She plans to house 15,000 people by the end of the first year, if elected. She also plans to use existing money from the state and federal government.

"I would appoint a chief, that person would report directly to me, I would access the resources that I have within the federal and state government that housing chief would bring together all the department heads and make sure this is the number one problem because it is a public health and public safety emergency."

"If someone is profoundly, mentally ill, they need support," Bass said when asked if police should be used to break up homeless encampments.

De León said he has been working on the city’s homeless issue for years. He built the largest tiny home village in the US and brought over $700 million in his ‘No place Like Home’ program to Los Angeles. De Leon said Los Angeles is the epicenter of homelessness nationwide.

"If we can build football stadiums and basketball arenas, we can sure as hell build housing for our unhoused neighbors. I’m not a talker, I’m a doer on this issue."

Kevin de León on how to improve LA homelessness

City Councilmember Kevin De León says if Los Angeles can build stadiums it can build housing for the homeless.

Caruso said he plans to build 30,000 beds in his first year, if elected as mayor. While answering the question on homelessness, he briefly referred to his website for this master plan then told a story of how his grandparents moved to Boyle Heights to live out the American dream.

Los Angeles City Councilmember and former LAPD officer Joe Buscaino calls LA "a city that has been a welcoming mat" for homelessness, calling for a camping law that "has teeth."

"When you have homelessness, crime and corruption you’re dampening those dreams and that’s what’s happening to the city, that’s why I’m in the race. My interest is to do what’s best for the residents," Caruso stated.

Councilmember Buscaino, who represents the 15th Council District, plans to activate the emergency response center 24/7. During the debate, he said he plans to take his actions that he did in his district and apply them citywide. He said he plans to give the city council a plan within his first 60 days on building 9,000 interim shelter beds.

"If we had a natural disaster there would be a FEMA general here on the ground, in charge of recovery. I wrote we have the equivalent of that, the disaster is homelessness and no one is in charge, my first day that changes by reporting directly to me," Feuer said about his plan to tackle homelessness.

If elected as mayor, he plans to have pop-up locations offering help and services to the homeless, he also plans to change the street engagement strategy the city currently has when approaching unhoused residents on the street.

It was a heated debate Tuesday night, as the top five candidates for mayor of Los Angeles met for the first time in a live televised debate. It was the very first debate for developer Rick Carso.

On the topic of crime in Los Angeles, FOX 11’s Elex Michaelson asked de Leon if he felt safe walking around the streets. On a scale of 1 to 10, 10 being the safest, de León quickly answered with a 7, replying that that number is all relative to every resident, depending on their zip code and color of their skin. De León said to combat crime in the city, his main goal would be to better utilize the resources the city has now. He said increasing the LAPD's budget means increasing taxes for residents.

"We need to hire mental health specialists to get our LAPD officers off the mental health frontlines and back on the line of duty to protect and serve. Every person deserves to be treated with professionalism as well as respect and dignity," Kevin de León stated.

Addressing LA’s crime increase, Feuer said he proposes an increase in 500 officers to 10,000 and a series of reforms "so our officers are embedded in communities that are distrustful of police." Feuer said he also plans to have interventions with mental health issues on the street that aren’t violent, have civilian ambassadors at local police stations, and deescalate violence through proper training of our officers.

LA City Attorney Mike Feuer said he wants to enact an eight-point plan to combat gun violence in the city, that will force the city to work with LA County District Attorney George Gascón.

Buscaino said he is a strong supporter of the police and voted against defunding LAPD, in fact, he said one of his first actions as mayor is to refund the LAPD $150 million. The councilmember said once you start defunding police, you have a spike in crime.

Former LAPD officer and LA mayoral candidate Joe Buscaino says he will honor the LAPD, but will also "be the first to hold you accountable."

Caruso said when he was president of the police commission he helped reduce crime by 30% by reversing the course of the LAPD, hired 800 officers, increased community policing and built trust in the community.

"Instead of taking a look at our city and saying the pie is only so big, and so we can only afford to do so many things and if we’re going to add more officers we have to cut other things, why don’t we work on growing the pie? Bringing in new jobs, creating new businesses, creating new revenue for the city," Caruso stated.

Bass’ take on crime focusses on crime prevention and building safer communities. She said while addressing the crime of today is important, her focus is to prevent crime from even happening.

"While I want to suppress the crime of today, I want to very seriously invest in prevention in the future and in my office I want an office of community safety so we can prevent the crimes of the future and make the investments in the communities that will do that,’ Bass explained.

Candidates were asked about their opinion on the current recall effort of LA County District Attorney George Gascón. While not all of the candidates agreed with the recall, they all disagree on some of Gascón’s policies.

Rep. Bass: 'No reform should be so rigid that it can't be flexible'

"I think there is a problem with the recall process. Period. If you’re gonna recall somebody it should be because they’ve done some egregious ethics issue or violated the law," Karen Bass.
Bass went on to say that she supports criminal justice reform, but disagreed with Gascón's decision not to sentence convicted child molester Hannah Tubbs to an adult facility and does not agree for zero bail on misdemeanors, because domestic violence and DUI crimes can sometimes fall under that category.

Caruso said that he sat down with Gascón and told him that his policies were hurting Los Angeles. He believes that Gascón needs to change his policies or he needs to be recalled.

"You need to change your policies or you need to step down, and if you don’t do that, you need to be recalled because people are dying and people are feeling unsafe," Caruso said, noting that he has contributed to the recall effort.

Feuer said he and Gascón disagree in a number of ways, including gang enhancements and gun enhancements. "I believe that we should hold people accountable for low-level offenses," Feuer said.

"I'm not big on recalls but when you elect someone to do their job when you elect a prosecutor to prosecute crimes and he’s not doing it he’s got to go. He's coddling criminals and not supporting victims. When you see folks on social media who are in prison who are laughing at these policies that's an embarrassment," Buscaino added.

Los Angeles has continued to see drops in COVID-19 case numbers, leading to the easing of some of the toughest restrictions in the country. All five candidates were asked the same question on COVID-19 – "If we do see another surge would you support a return to more stricter rules?"

Feuer immediately said the decision was up to public health officials. "If we see a surge, we’re going to have to listen to the public health experts’ advice which I’ve been doing throughout this whole process." He added that tougher restrictions should be meant to keep businesses and schools from closing. "We need to be taking steps to prevent the worst from happening," Feuer said.

When asked if LA should reenact COVID restrictions in the event of another surge, he said that the city should follow the advice of the experts.

Caruso said he looks at COVID-19 as a "shared responsibility."

"You need to follow the advice of the experts," he said. "But I think government has two critical jobs. One of them is to protect peoples’ lives, the other is to protect their livelihoods," adding that the latter is where LA failed in his eyes during the pandemic.

Rep. Bass said she would "follow the science" as it comes to COVID-19 restrictions, but said the focus to mitigate damage from the pandemic should be on communities that were disproportionately affected by coronavirus.

"I do think that if we continue now, to really focus on vaccinations in communities where it’s disproportionately low, the next time we have a variant… it will not impact people the same way. Until the world is vaccinated, we’re going to continue to see variants."

While de León didn’t specifically address whether he’d support more COVID restrictions in the event of another surge, he did stress the need for preparedness if and when that surge comes.

"There will be another pandemic, be rest assured, but we have to be prepared for it," de León said.

To help accomplish that, de León said he wants to create a public health department which will  "cut through all the bureaucratic B.S. at the county and state level and make sure we get the federal dollars directly to the city."

Buscaino quickly said he would do away with restrictions as mayor, declaring "this emergency is over. Enough with these emergency orders."

He said that one of his first actions as mayor, if elected, would be to end the city of Los Angeles’ employee vaccine mandates. "We are losing our police officers and firefighters to neighboring agencies, at the same time we’re seeing a spike in fires and a spike in crime. We have to end the employee vaccine mandate in the city of Los Angeles," he said.