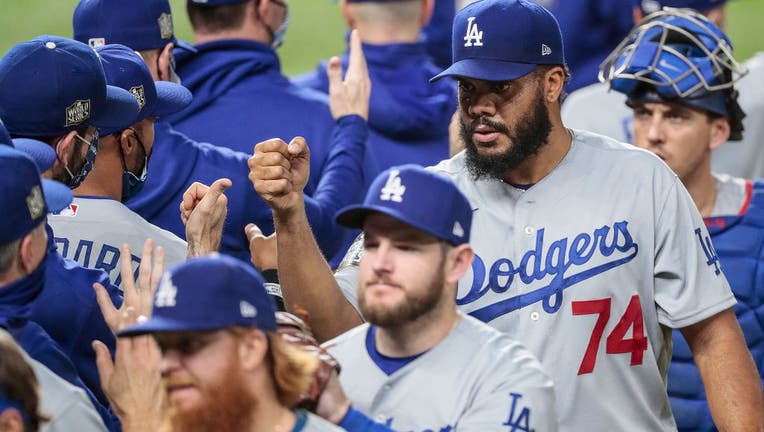 LOS ANGELES - The Los Angeles Dodgers will try to move within one victory of their first World Series championship since 1988 when they face the Tampa Bay Rays Saturday night.

The Dodgers took a two-games-to-one lead in the best-of-seven series with a 6-2 victory Friday, scoring five runs with two outs.

Of the 59 previous times the Series has been tied at one game apiece, the Game 3 winner has gone on to win the Series 38 times, 64.4%.

Julio Urias is set to pitch for the Dodgers and fellow left-hander Ryan Yarbrough for the Rays. Urias is 4-0 with a 0.56 ERA in one start and three relief appearances in the 2020 postseason, striking out 16 batters in 16 innings. Opposing batters are hitting .125 against him.

The MLB draft is limited to players residing in the U.S. and Canada. Urias was born, raised and continues to live in Culiacan, Mexico. He was signed by Mike Brito, the Dodgers scout who also signed Fernando Valenzuela for the team.

Urias made his professional debut in 2013 with the Dodgers' Class AMidland, Michigan-based Midwest League affiliate, the Great Lakes Loons. He made his major league debut on May 27, 2016, when he was 19 years, 289 days old, the 34th Dodger to make his MLB debut as a teenager since the club joined the National League in 1890.

Yarbrough is 1-0 with a 3.38 ERA in one start and two relief appearances in the 2020 postseason. Opposing batters are hitting .262 against him.

Walker Buehler limited Tampa Bay to one run and three hits over the first six innings Friday, striking out 10, while three relievers allowed one run and one hit over the final three innings.

Buehler lowered his career postseason ERA to 2.35, fifth among pitchers with a minimum of 10 starts over the last 100 years.

The Dodgers scored the first five runs, beginning with Justin Turner'stwo-out solo homer in the first.   In the third, Max Muncy singled in Corey Seager, who was hit by a two-out splitter from Charlie Morton, and Turner, who doubled.   A sacrifice bunt by Austin Barnes drove in Cody Bellinger, who singled leading off the fourth. Mookie Betts followed Barnes' bunt with a two-out single, driving in Joc Pederson, who singled, increasing the Dodgers' lead to 5-0.

Margot scored one out later on Willy Adames' double.   Barnes, the Dodgers' No. 9 hitter, hit a two-out solo homer in the sixth, becoming the first player with a home run and an RBI on a sacrifice bunt in a World Series game since Hector Lopez of the New York Yankees in Game 5 of the 1961 Series.

Tampa Bay scored its other run with two outs in the ninth on rookieRandy Arozarena's solo homer off Kenley Jansen.

The homer was Arozarena's eighth of the postseason, tying the record for a single postseason set by Barry Bonds of the San Francisco Giants in 2002and tied by Carlos Beltran of the Houston Astros in 2004 and Nelson Cruz of theTexas Rangers in 2011.   The American League Championship Series MVP was one-for-nine with a single in the World Series before the home run.   Morton took the loss, allowing five runs and seven hits in 4 1/3innings, striking out six, walking one and hitting a batter. The right-hander entered the game 3-0 with a 0.57 ERA in the 2020 postseason.

Morton was seeking to become the second pitcher to win each of his first six postseasons starts with a team, joining Hall of Famer Lefty Gomez, who did so for the New York Yankees between 1932-38, when the postseason only consisted of the World Series, according to ESPN Stats & Info.

Morton was also attempting to become the second to allow one or no earned runs in six consecutive postseason starts, joining Curt Schilling.   The entire World Series is being played at Globe Life Field in Arlington, Texas. The final three rounds of baseball's postseason are being played at neutral sites in an attempt to reduce the possibility of spreading the coronavirus.

For the first time in the series, the roof at Globe Life Field was closed for Game Three, but an MLB official told City News Service on Saturday that the roof would be open for Game Four.

"Given Friday's forecasted temperatures, wind chill, and the possibility of rain, the Commissioner's Office has determined that the roof of Globe Life Field will be closed for Game Three," according to a pregame statement from Major League Baseball.

"MLB, which consulted with medical advisers in reaching this decision, believes that a closed roof will provide the best competitive environment for players and the most comfort for fans without jeopardizing their safety in any way."