Garcetti discussed in&nbsp;detail of his budget proposal ahead of its release on Tuesday.

"It's a financial document, but also a roadmap to a city built on justice and equity ... it's the biggest city budget I've ever presented, and it's the most progressive, too, arguably of any big city anywhere," Garcetti said of his proposal, which he called the "Justice Budget."

Garcetti's budget for the fiscal year that begins on July 1 includes $24 million for a Guaranteed Basic Income pilot, which he said will be the largest of any U.S. city. The program will give $1,000 a month to 2,000 low-income families for a year "no questions asked," Garcetti said.

The city's previously allocated $6 million to a program that gives $1,000 a month to 500 single-parent households in Councilman Curren Price'sdistrict in South Los Angeles. That program's funding was allocated from funding cut from the Los Angeles Police Department's budget.

"We're betting that one small but a steady investment for Angeleno households will pay large dividends for health and stability across our city and light a fire across our nation," Garcetti said.

"When you give money to people who are poor, it creates better outcomes, it covers child care, it puts food on the table, it leads to more high school graduations and better checkups."

Garcetti also announced that he will create an advisory commission and speak with academic partners to facilitate the creation of a pilot slavery reparations program for Black Angelenos.

Los Angeles Mayor Eric Garcetti plans to send his budget proposal to the City Council, including money allocated for a homeless program.

The proposal also pledges an additional $300 million from the American Rescue Plan toward L.A.'s Emergency Rental Assistance, bringing the total amount of direct assistance for rent, utilities and other basic needs during the COVID-19 pandemic to $700 million, Garcetti said.

"But the pandemic didn't start our housing crisis, and our success in eliminating so much rent won't end it," he said before announcing that the budget will dedicate more than $950 million to the fight against homelessness.

"To put that number in perspective, when I became mayor, we spent about $10 million on treating homelessness," Garcetti said.   He said the key to ending homelessness is renting, buying and building homes, and he called on the state to invest $16 billion over four years in California cities' housing and services. He also called for the federal government to declare a "Right to Housing" policy and fully fund Section 8vouchers to "help make homelessness a thing of the past." 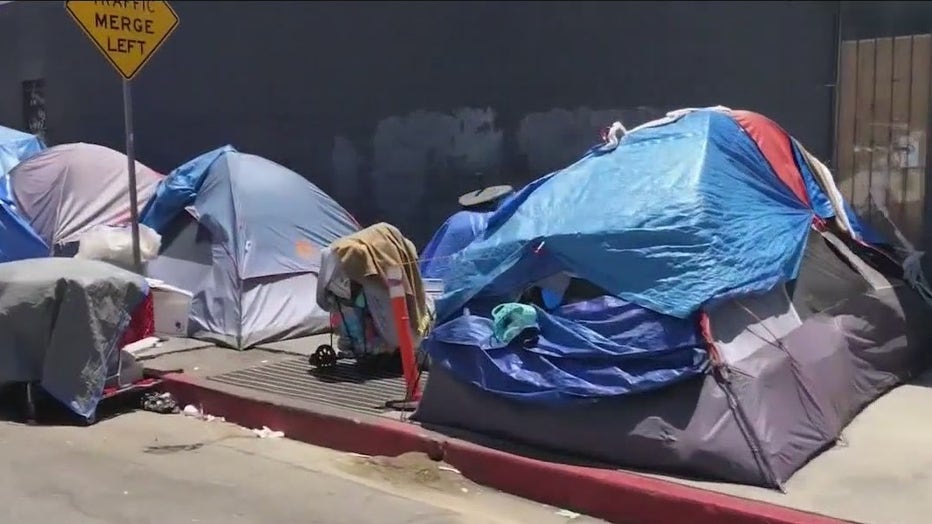 Councilman Mark Ridley-Thomas, who has been working to create a Right to Housing policy in Los Angeles, praised the proposal for focusing on solutions to the homelessness crisis.

"Meaningful change begins with action. I applaud Mayor Garcetti for understanding that Angelinos are most concerned about the number of homeless we see in parkways, in the streets, and living in vehicles and proposing an unprecedented commitment of resources to allow us to scale up our response," he said.

"We will not address this moral crisis with the urgency and conviction that is warranted if we don't have a comprehensive strategy, sufficient ongoing resources, and ultimately, an enforceable obligation on government to act."

He added that he wants the final budget to advance his Right to Housing framework, which he proposed in a motion that was unanimously approved by the City Council on March 3.

Councilwoman Nithya Raman also voiced support for the large amount of funding allocated in the budget to combat the homelessness crisis.

"Tomorrow our Mayor will release his proposed budget for the city of Los Angeles, which will include almost a billion dollars in new spending to address homelessness. That figure represents nearly a sevenfold increase over just five years ago, and is finally at a scale that begins to match the enormity of the challenge we face," she said.

Garcetti's proposal also commits funding to L.A.'s small businesses and street vendors, including through a $25 million program to give $5,000 checks to 5,000 businesses.

"Businesses who want to open or re-open those doors, your city is going to have your back so you can reopen, hire up and spread the wealth," he said. He also called for the City Council to approve an ordinance that would cut the time it takes for restaurants to receive alcohol permits by 90% and the cost of the permit by 70%.

He also voiced support for letting restaurants defer $8,000 or more of its expiring fees for three years and suspend valet and off-site parking requirements, which he said would help restaurants save up to $10,000.

Garcetti's budget proposal also includes $2 million in grants for low-income neighborhood restaurants to create permanent areas for outdoor dining as part of the city's Al Fresco dining program, which was created during the pandemic, and which Garcetti said Monday should be made permanent.

The proposal would also fund police alternatives, including increasing the Gang Reduction and Youth Development Program's budget by a third to $33 million, which would add 80 new "peace ambassadors" to the GRYD team, Garcetti said.

The proposed budget would also fund a one-year pilot program to provide a community-based response team to nonviolent crises experienced by people experiencing homelessness in the city's hardest-hit neighborhoods.

The budget would also create a new program called Therapeutic Unarmed Response for Neighborhoods, which would send "clinicians instead of cops" to non-violent mental health emergencies 24-hours a day, seven days a week.

Garcetti also pledged money to clean up Los Angeles through a Clean L.A. Jobs plan that would provide employment to hundreds of young Angelenos to clean up the city and help them find a pathway to a full-time career.

His budget also commits $5 million to provide 400 students with a year of service through the Angeleno Corps program.

The mayor's spending proposal would fully fund the city's newly created Climate Emergency Mobilization Office and during the speech, Garcetti committed to getting the city to 80% renewable energy and 97% carbon-free energy by 2030, six years earlier than the city's previous commitment.

He committed to 100% carbon-free energy by 2035, which is 10 years ahead of schedule. He also called on the city to declare a moratorium on any new oil and gas drilling and a ban on styrofoam and single-use food ware that can't be recycled.

"This is a make-or-break decade. It's time to go big, go bold, go green, and cities are leading the way," Garcetti said.

The budget proposal also includes spending to help the city "end the pandemic" with $75 million for vaccines, testing and personal protective equipment.

"Three hundred sixty-five days ago, at my last State of the City address, I stood before you to pledge that we would emerge from this crisis, and when we did, we would rebuild our city but we would not return to a broken status quo," Garcetti said.

Council President Nury Martinez echoed that sentiment in a statement Monday evening.  "Over the past year we knew our city was going to be forever changed on many levels post-COVID-19, but what would that change look like?

During this pandemic, the Los Angeles City Council prioritized communities that have long held us up -- the working families, Black and Brown communities, the workers that have always been essential but are finally being recognized.

As we move forward, we must build on the momentum of the COVID-19 crisis response to further transform our city into one that achieves its core work while addressing the stark inequities that existed long before, but have been exacerbated by the pandemic," she said.

Black Lives Matter's Los Angeles chapter criticized the mayor on Twitter during the speech for appropriating progressive language from the "People's Budget" created by the activist organization the People's City Council but lacking that budget's substance.