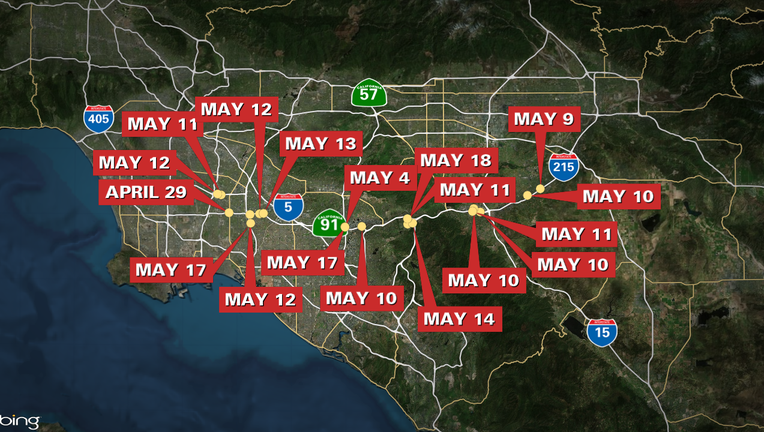 RIVERSIDE, Calif. - The California Highway Patrol continues to investigate a string of shootings reported on freeways across Southland. Investigators believe in most incidents it appears a BB or pellet gun was used.

At least nine more random shootings were reported along the 91 Freeway since May 20, officials said.

"What we're asking from the public is victims of this immediately call 911 and give us their exact location and time and description -- even if it's just a description of the vehicles around them," CHP Officer Florentin Olivera said.

"We are looking at the traffic cameras for leads, but need people to help us" he adds. Some drivers actually report being hit after they get off the freeway, so investigators are not sure if those are related to the on-freeway series, which extends mostly along the 91 freeway.

A CHP unit got hit while the officer was writing a ticket to someone else, authorities said. No one has been injured, but if a startled driver reacts poorly and hits other vehicles, things could get very ugly, very quickly. 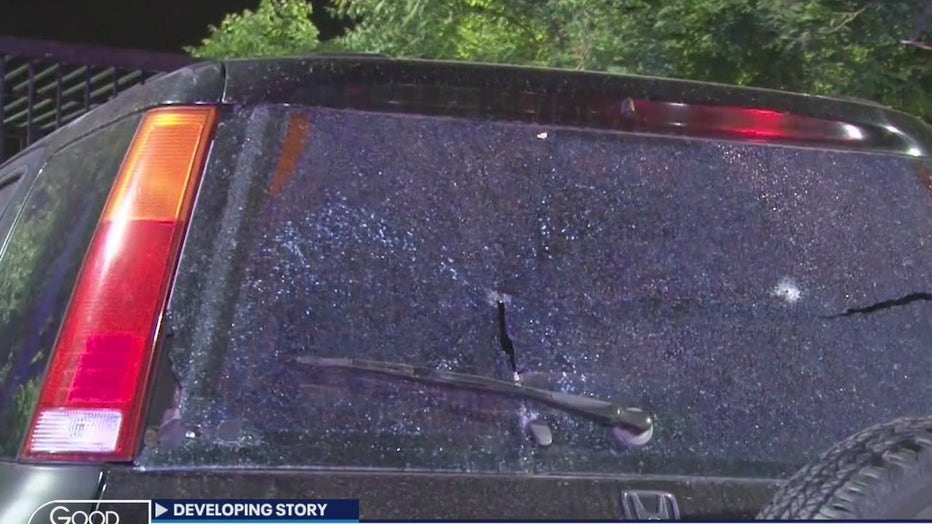 Many victims have waited to call authorities, so it is much more difficult to use cameras on the freeways to narrow in on potential suspect vehicles, Olivera said.  "If we keep seeing the same vehicle around the same location we'll narrow it down," he said. If a vehicle window is shattered, drivers are advised to pull over where it is safe or go to the nearest exit and pull over to call 911, Olivera said.

Authorities are unsure if some of the incidents are due to gravel being kicked up by a big-rig truck or if there is a suspect or multiple suspects shooting at vehicles with a pellet gun.

Some of the shootings were happening in broad daylight. On the morning of May 20, FOX 11’s Stu Mundel was overhead in SkyFOX when at least one window was shot out on a van that was traveling westbound on the 91 Freeway in Anaheim. FOX 11 was able to get the aerial footage following a tip from a viewer.

Another freeway shooting reported in Anaheim on the westbound 91 Freeway

The driver of a white van appeared to be another victim of a freeway shooting on Thursday morning. The shooting was reported on the westbound 91 Freeway in Anaheim.

CHP said just before midnight on Tuesday, a driver’s window was struck on the eastbound lanes of the 91 Freeway in Corona near the Main Street off-ramp.  The driver was uninjured and called 911 immediately.

Earlier in the evening, employees at a Jack in the Box in Jurupa Valley at 5642 30th St. reported windows being shot out of four vehicles in the parking lot around 11:30 p.m.

Olivera also said an incident was reported about 9 a.m. at the 91 Freeway and 241 toll road in the Anaheim Hills area.

Shootings reported on 91 Freeway in Riverside

Authorities are searching for suspect -- believed to have opened fire from a moving vehicle -- opening fire at other drivers on the 91 Freeway in Riverside.

Authorities said around 6:30 p.m., there was another incident at the 91 and 57 Freeway in Anaheim. No one was injured in either incident.

At about 9 a.m. Friday, a CHP officer's cruiser sustained a damaged window on the eastbound 91 at the 241, Olivera said.

"An officer was finishing up an enforcement stop and completing notes on the citation when he heard a noise and the back window was shattered.

There were big rigs going by at the same time," so it might have been a rock that caused the damage, Olivera said. "We're not sure what shattered the window."

Similar incidents have been reported in Los Angeles, Orange and Riverside counties dating back to last month, Olivera said. Many have been in the Westminster area.

Authorities continue to investigate a series of freeway shootings reported by drivers across Southern California.

Two incidents happened just before 7 a.m. on the westbound 91 Freeway near Norwalk Boulevard, and Wednesday night on the 91 Freeway in Cerritos.

Last Tuesday, windows on two vehicles traveling along the eastbound 91 Freeway were blasted by a pellet or BB gunfire.

The CHP received a call of shots fired at about 5:50 p.m. on May 11 east of Lincoln Avenue and responding officers located the victim, who was driving a white GMC Safari van that had its middle left side window shattered, according to Officer Juan Quintero.

A preliminary investigation determined the weapon used was a pellet or BB gun, based on the damage, Quintero said.

A second incident occurred about 6 p.m. east of Tyler Avenue when the driver of a white Jeep Wrangler reported hearing a pop, followed by a window shattering. Officers inspected the vehicle and discovered the Jeep's left side, third row window was shattered, Quintero said.

No injuries were reported in either incident and no suspect information was available, he said.

And windows on three vehicles traveling on the westbound 91 Freeway in Corona on Tuesday morning were damaged by one or more individuals using pellet or BB guns.

The first attack occurred about 5 a.m. near Main Street when a Ford Transit van in the slow lane had its driver's side passenger windows hit, Quintero said. About 15 minutes later, a Ford F-150 pickup entering the express lanes at Main Street had its rear window cracked by a pellet or BB, said Quintero.

Around 5:30 a.m., the driver of a Ford Excursion was approaching Lincoln Avenue in the middle lane when its rear window was shattered by one or more pellets or BBs, Quintero said.

Two motorists reported shattered windows while driving on the 405 Freeway in the Seal Beach area on April 27.

If anyone has observed suspicious activity that may be related to these incidents, please call the CHP Border Division Investigative Services Unit at (714) 288-6336.