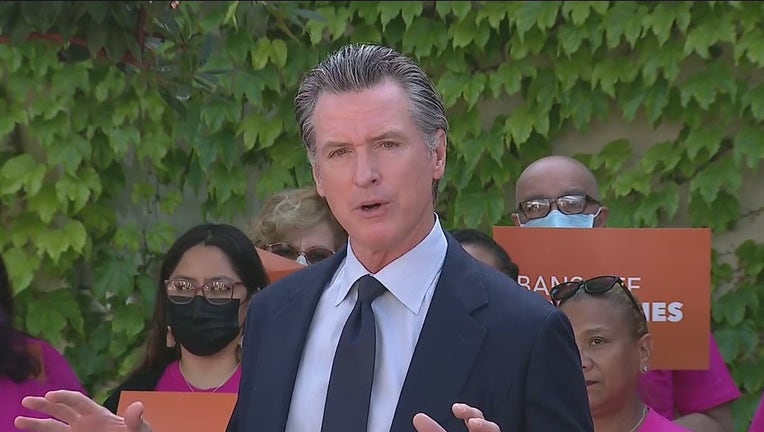 The leaked document was verified as authentic by Chief Justice John Roberts on Tuesday.

"We’re not going to be defeated. Certainly not here in California," he said from the Planned Parenthood headquarters in South Los Angeles.

Newsom said he was "outraged," that the nation seems to be taking away liberties while other nations are becoming more progressive.

In the news conference, Newsom referred to the Loving v. Virginia decision that overturned the southern state’s ability to press criminal charges linked to interracial marriage.

He noted 8.6 million California residents are of reproductive age and many women do not have the finances to afford even the co-pays that come with having an abortion. He reiterated the state is committed to protecting women and girls and that overturning Roe v. Wade will have a tremendous impact on women of color.

Gov. Gavin Newsom is set to announce the state's stance on abortion rights on May 4.

Essentially, Newsom said the Golden State will serve as a Sanctuary State for women and that the state is in the process of rolling out programs to support reproductive rights, including a new website where residents can access information.

"We have their back. They matter, we care," he said as he hopes California can serve as a beacon of hope. "In California, they shouldn’t be alone."

He added the potential overturning of Roe v. Wade is an economic issue about equality and women’s rights.

"Our daughters, sisters, mothers, and grandmothers will not be silenced. The world is about to hear their fury. California will not sit back. We are going to fight like hell," Newsom said in a tweet earlier this week.

Hundreds of people participated in an abortion rights rally in downtown Los Angeles on Tuesday afternoon. Roe v. Wade gives women the choice to get an abortion in the U.S.

"This leak is not law yet, so we have a chance now to stop it from becoming law. This gave the people of this country an opportunity to rise up in mass numbers, to get out into the streets to compel the Supreme Court to do the right thing. If the Supreme Court has the audacity to overturn Roe v. Wade, it's going against the will of the majority of the American people. That is an assault on democracy and that is an affront to the American people," said Skyler Soloman, one of the lead organizers of the rally.

Earlier Wednesday, Newsom said in a tweet, "We are taking the fight back to anti-choice Republicans. This will be the defining issue of the 2022 election. I won’t sit back."

This week, Newsom released his first re-election election campaign video as Californians will head to the polls in November.