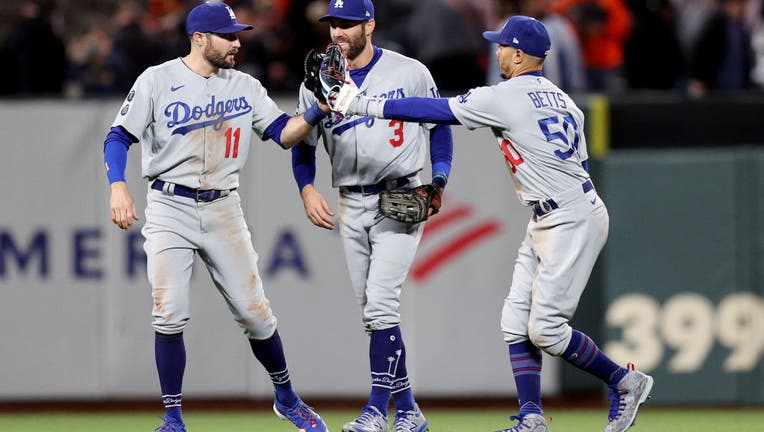 SAN FRANCISCO, Calif. - The Dodgers defeated the Giants, 9-2, Saturday night in San Francisco to tie the best-of-five series at one game apiece.

During Saturday's game Cody Bellinger and AJ Pollock hit back-to-back two-run doubles in the sixth inning, breaking open what had been a 2-1 game.

Left-hander Julio Urias limited the Giants to one run and three hits over five innings, striking out five and walking one, for the victory before a crowd at Oracle Park.

"I thought the pitches were working really well," said Urias, MLB's only 20-game winner in 2021.

After being limited to five hits in Game 1 on Friday, the Dodgers had 11 hits Saturday, including two each by Chris Taylor and Pollock. Justin Turner was the only Dodgers starter without a hit.

Bellinger had his first multi-RBI game since Aug. 22. The 2019 NL MVP hit .165 during a regular season in which he was placed on the injured list three times and missed 61 games because of a left calf contusion, left hamstring tightness and a left rib fracture.

Right-hander Kevin Gausman, the first of six San Francisco pitchers, was charged with the loss, allowing four runs and four hits in 5 1/3 innings, striking out seven and walking three. He was removed after walking Will Smith.

Bellinger, the second batter to face reliever Dominic Leone, doubled in Trea Turner, who doubled leading off the sixth, and Smith, who walked. Pollock doubled in Taylor, who drew a full-count walk from Leone, and Bellinger.

The Dodgers opened the scoring in the second with two runs. Urias' two- out single drove in Taylor, who doubled. Mookie Betts followed with a single, driving in Pollock, who was intentionally walked.

The Giants scored once in their half of the second. Leadoff hitter Wilmer Flores drew a bases-loaded walk, moved to second on Brandon Crawford's single, third on Evan Longoria's fly out and scored on Donovan Solano's sacrifice fly.

Dodger fans excited over win in Game 2 of NLDS

The Dodgers defeated the Giants, 9-2, Saturday night in San Francisco to tie the best-of-five series.

San Francisco scored its other run in the sixth. Pinch-hitter LaMonte Wade drew a four-pitch walk from reliever Joe Kelly with one out, moved to second on Buster Posey's single, went to third on Flores' fielder's choice and scored on Crawford's single.

Betts, the Dodgers' right fielder, ended the inning by throwing out Flores at third base.

RELATED: Dodger fans cheer on the Boys in Blue at Oracle Park

"Sometimes you just do things that you don't know why or just kind of do it, and that was just one of those things," Betts said. "I kind of peeked and saw him going to third and, I don't know, just whatever. It all just kind of happened so fast, and fortunately, I was able to make the throw and stop the momentum there."

Flores said he was not looking at third base coach Ron Wotus and made the decision to try to reach third on his own.

"I just thought the ball was more in the corner," Flores said.

The Dodgers combined Smith's leadoff homer, singles by Taylor, Pollock, Beaty -- who was pinch-hitting for reliever Corey Knebel --and Corey Seager for three runs in the eighth.

The Dodgers went 11-0 in Scherzer's starts in the regular season after they acquired him in a July 30 six-player trade with the Washington Nationals that also brought them Trea Turner, the 2021 NL batting champion.

Scherzer was the Dodgers' starter in Wednesday's NL wild-card game, but did not figure in the decision in the 3-1 victory over the St. Louis Cardinals.