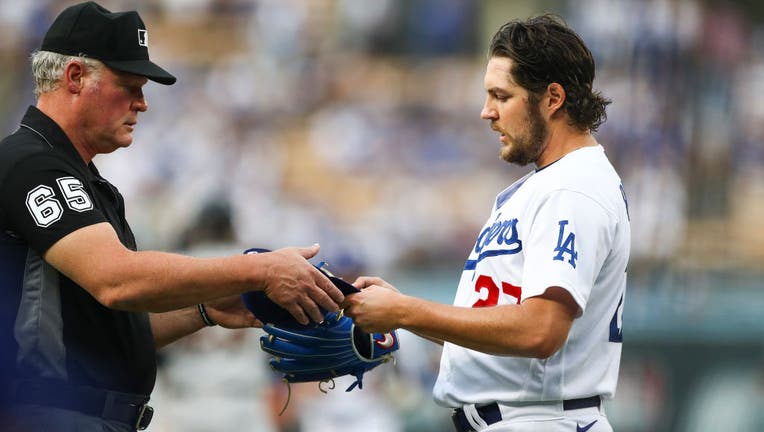 LOS ANGELES, CALIFORNIA - JUNE 28: Umpire Ted Barrett #65 checks the hat and glove of Trevor Bauer #27 of the Los Angeles Dodgers for foreign substances after the first inning against the San Francisco Giants at Dodger Stadium on June 28, 2021 in Los

According to a report from ESPN's Jeff Passan, Bauer's paid leave has been extended to July 27. Both MLBPA, the union representing the players, and MLB agreed to extend Bauer's administrative leave as police in Pasadena and the league continue to look into the allegations against the Dodgers pitcher, Passan reports.

Wednesday's development marks the second time Bauer's paid leave was extended. His initial 7-day leave was initially extended to the end of July 15, before Passan's report from Wednesday indicated that the leave will be extended by almost two weeks.

Dodgers skipper Dave Roberts says he does not expect star pitcher Trevor Bauer to return with the team right as the 7-day administrative leave expires this coming Friday.

John Fetterolf, one of Bauer's agents, issued a statement on June 29 saying the Dodgers pitcher's interactions with the accuser were "wholly consensual."

Bauer had been on the league's administrative leave since July 2 after the Pasadena Police Department launched an investigation against the pitcher back in late June. A woman claimed Bauer "got physical with her" earlier in the year and the accuser was granted a temporary ex parte restraining order.

While Bauer remains with the Dodgers, the ongoing investigations prompted the team to pull the pitcher's bobblehead night giveaway from the team schedule. All merchandise related to Bauer was also pulled from the Dodgers' official team store.