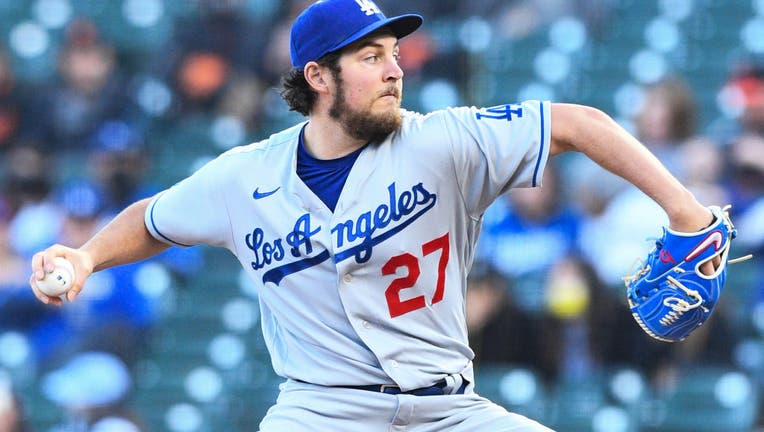 LOS ANGELES - Pitcher Trevor Bauer’s future with the Los Angeles Dodgers remains a mystery after the team canceled his bobblehead night scheduled for next month amidst his sexual assault allegations, it was announced Wednesday. The team also said they have pulled his merchandise from the team store and website.

The Dodgers provided the following statement to FOX 11 on Wednesday afternoon:

"The Dodgers did not feel it was appropriate while investigations continue by Major League Baseball and the Pasadena Police Department. The team will have no further comment at this time."

His bobblehead night was scheduled for Aug. 19 and earlier this week, Dodgers Manager Dave Roberts said he expected the right-handed pitcher would be out longer than his seven-day leave.

Bauer is being investigated by the Pasadena Police Department after a San Diego woman accused the National League Cy Young Award winner of choking her to the point of losing consciousness and other violent acts she claims she did not consent to during their two sexual encounters, according to court documents.

Documents obtained by FOX 11 also claim that she checked herself into the emergency room due to the injuries she sustained during the alleged incidents. Her attorneys also provided pictures that showed the victim’s bruises and swollen eyes after she alleged that Bauer punched her repeatedly on multiple parts of her body.

The 27-year-old accuser said the two had consensual sex but that she "did not agree to be assaulted."

Bauer's attorneys also released screenshots of Instagram direct messages and text messages between Bauer and his alleged accuser. In the messages, the accuser allegedly wrote things such as "gimmie all the pain and "choke me out."

Former Dodgers pitcher Dave Stewart, the father of two daughters, said he would not attend the Dodgers’ 1981 World Series championship anniversary because the franchise failed to act before the league stepped in, he said in an interview with USA Today.

FOX 11 has opted not to name the accuser at this time or show photos from the documents, in accordance with policy to not identify potential victims of sexual assault.

Bauer, who is known for being active on social media including his YouTube channel, has been silent since the allegations first surfaced.

His hearing is scheduled for July 23.

Under his contract, he is set to make $40 million this season.