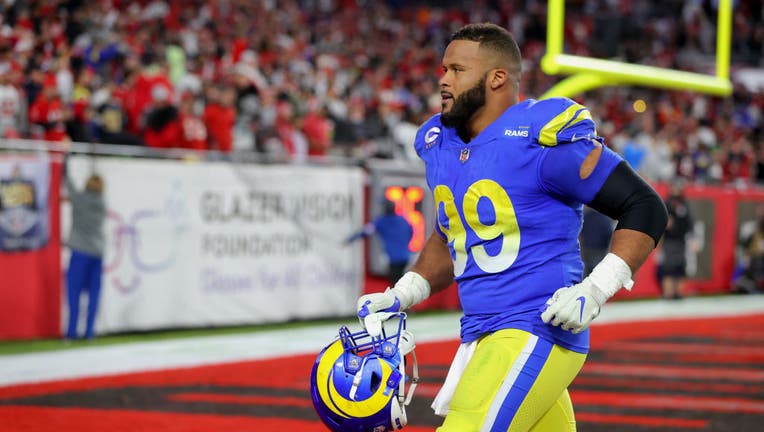 LOS ANGELES - Not only does he wear royal blue and gold on the field, but he also has a heart of gold.

The three-time defensive player of the year and eight-time Pro Bowler has teamed up with CAUZEO to make a lucky fan’s dream come true. The proceeds will benefit AD99 Solutions, a nonprofit organization Donald founded in 2019. The organization benefits children who live in Pittsburgh’s underserved communities.

With a $10 donation, fans will have to chance to win the grand prize of two lower-level tickets to Sunday’s game, and the runner-up will receive an autographed Donald jersey.

The 49ers have owned the Rams in the past six meetings, and have a 75-67-3 mark against their California rivals.

Until Sunday, only one of all those confrontations was in the postseason — the Niners won that one, too, 30-3 in 1989 on the way to the most lopsided Super Bowl victory.

Now, San Francisco goes for a three-game sweep of Los Angeles, though the Rams will be at home and favored.

Each team comes off last-second victories on field goals, the Niners on the Lambeau Field tundra, the Rams in balmy Tampa against Tom Brady and the Bucs. They know one another so well their coaches probably could swap sides and be comfortable.

San Francisco’s mastery of its longtime rival has to raise the confidence level of the 49ers, while ticking off the Rams. Not to be overlooked is how the 49ers rallied to beat the Rams in the season finale, which SF needed to qualify for the playoffs.

That said, the Rams are playing at home — SoFi Stadium will stage the Super Bowl, and the five-plus decade run of teams not hosting the big game ended in Tampa last year.

Los Angeles added stars in Stafford, Miller and Beckham with one thing in mind: returning to the Super Bowl the Rams lost three years back. And the Niners, with many of the same players still on hand, lost their chance for the NFL title two years ago to Kansas City.

So both teams have a nasty taste to remove.