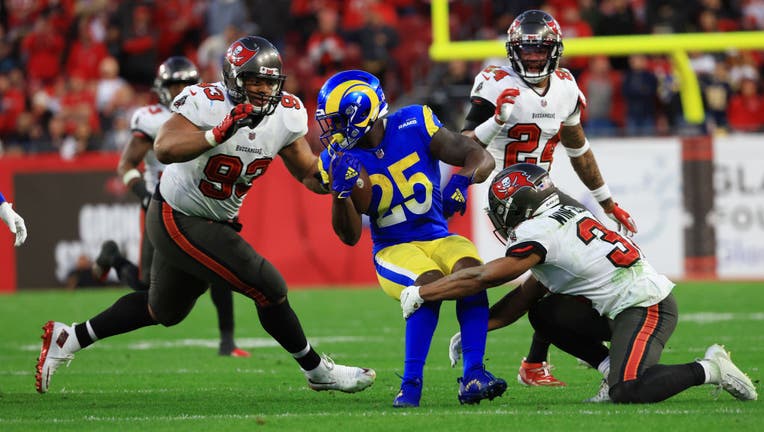 TAMPA, FLORIDA - JANUARY 23: Sony Michel #25 of the Los Angeles Rams runs with the ball as Tampa Bay Buccaneers defensemen tackle in the fourth quarter in the NFC Divisional Playoff game at Raymond James Stadium on January 23, 2022 in Tampa, Florida.

LOS ANGELES - SoFi Stadium will become the first stadium to host an NFL conference championship game and a Super Bowl in the same season after the Rams punched their ticket to next week's NFC championship game with a dramatic 30-27 victory over the Tampa Bay Buccaneers Sunday in Tampa, Florida.

The NFC title game will be played Sunday at 3:30 p.m., with the Super Bowl following two weeks later on Feb. 13, with kickoff also slated for 3:30 p.m.

The Rams will host the San Francisco 49ers this Sunday. The 49ers upset the top-seeded Green Bay Packers, 13-10, on Saturday night in Green Bay, Wisconsin. Had the Packers won, the Rams would have been traveling to Green Bay on Sunday.

Instead, the Southland's glittering new football palace in Inglewood will now enjoy two moments in the national spotlight. SoFi Stadium opened  It was built on the site of the former Hollywood Park racetrack, and sits adjacent to the Forum.

The stadium officially opened on Sept. 13, 2020, when the Rams hosted the Dallas Cowboys, but no fans were in attendance due to restrictions caused by the coronavirus pandemic.

SoFi Stadium -- which is also home to the NFL's Los Angeles Chargers -- is the most expensive stadium ever built at an estimated cost of about $5.5 billion.

The Rams raced out to a 27-3 lead against the Buccaneers on Sunday, only to see Tampa Bay tie the game with under a minute left. But Rams quarterback Matthew Stafford connected with receiver Cooper Kupp on two long passes to set up kicker Matt Gay's game-winning field goal as time expired.

SoFi Stadium is also scheduled to host college football's national championship game in January 2023, WrestleMania 39 in April 2023, and the opening and closing ceremonies, as well as soccer and archery events, for the 2028 Summer Olympics. 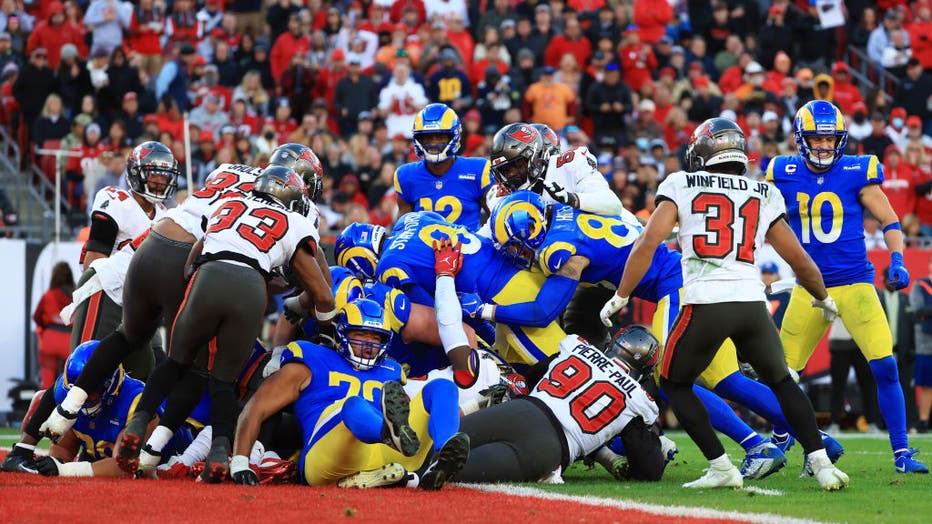 TAMPA, FLORIDA - JANUARY 23: Matthew Stafford #9 of the Los Angeles Rams jumps over Tampa Bay Buccaneers and Los Angeles Rams players to score a touchdown in the third quarter in the NFC Divisional Playoff game at Raymond James Stadium on January 23,

Super Bowl LVI could deliver as much as $477.5 million to the Los Angeles economy, including thousands of new job opportunities in the event- production and hospitality sector, plus major contracts for local businesses, according to projections released in October.

"This is going to be such an incredible infusion for our local businesses," Adam Burke, president and CEO of the Los Angeles Tourism & Convention Board, said on Jan. 13. "You go back to 2019, tourism has become one of the biggest drivers of our local economy, with over 544,000 Angelenos employed in tourism-related careers, and believe it or not, in 2019 visitors generated $38 billion for our local businesses."