It was a busy night for police in the San Fernando Valley.

LOS ANGELES - It was a busy night for law enforcement overnight in the San Fernando Valley as they were called to at least ten sideshows in the area, officials said.

The Los Angeles Police Department wants to make it clear that those caught at the illegal events, including spectators, could face a misdemeanor charge and a fine of up to $1,000.

One of the street takeovers occurred at the intersection of Roscoe Boulevard and Coldwater Canyon Avenue in Sun Valley where 15 people were detained, and some were cited for being within 200 feet of the sideshow.

LAPD officials said at least 60 drivers were racing and drifting at the Sun Valley intersection before scattering when officers first responded to the scene around 9:30 p.m. Thursday. At least eight cars were stranded at the scene. Some drivers ditched their vehicles, ran away from officers, or hopped into other vehicles.

LAPD’s street racing task force said it was prepared for the increased activity.

"Cinco de Mayo brings out a lot of street racers. They like to go out and create havoc on the streets and the intersections thinking it’s all fun. They like to make videos of it, but the problem is, people are getting injured and killed by these guys swinging and doing the donuts," said LAPD Sgt. Jodie McGee.

"They lose control, they hit the crowds…and then what happens is, as soon as they hit somebody, they take off," McGee added. "We’re trying to curtail the activity." 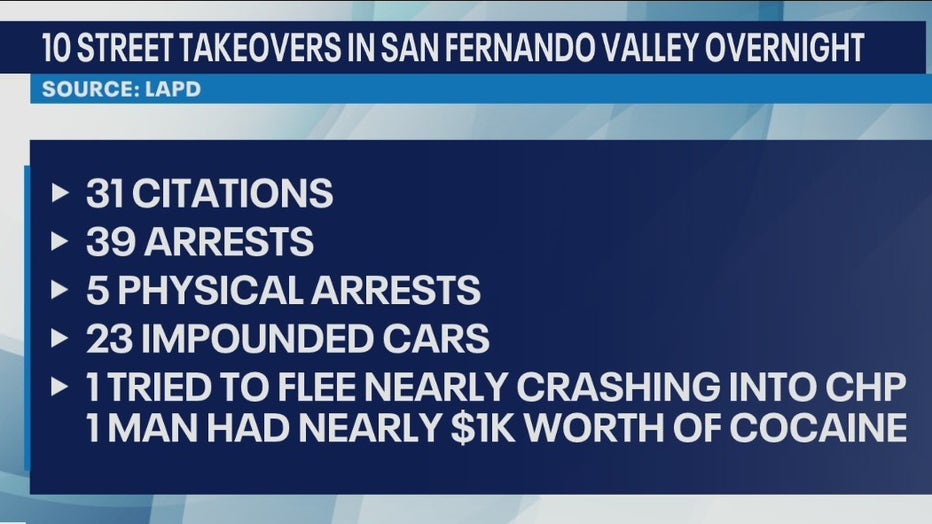 Overall, the LAPD reported 31 citations, 39 arrests, 5 physical arrests,  and 23 impounded cars. In addition, a suspect who tried to flee the area nearly crashed into a California Highway Patrol vehicle and officials caught a suspect who allegedly had nearly $1,000 worth of cocaine in his vehicle.