It was definitely a show of force, as hundreds of people from law enforcement and the community showed up at a fundraiser in Norwalk for the recruits injured during a training run with the LA County Sheriff Department after a vehicle plowed through the crowd.

LOS ANGELES COUNTY, Calif. - As numerous law-enforcement recruits representing Southern California continue to fight for their lives at the hospital, the community banded together in Norwalk to hold a fundraiser for the impacted cadets.

The fundraiser, which drew hundreds, comes a week after an SUV plowed through a group of recruits going on a morning run with the Los Angeles County Sheriff's Department in the Whittier area.

FOX 11 spoke with two cadets who were a part of the running group. Both of them are trying to make it into the Pasadena Police Department and tell us that even after the horrific incident, the two vowed to continue their training, or as one of them puts it, "finish what we started."

With them, a large crowd of Pasadena officers, including Lt. Carolyn Gordon, who is in charge of recruits. Lt. Gordon beamed when she saw the show of support for the two men.

"It's about making them feel that it’s going to be ok, that their family is there for them, and their family," Lt. Gordon said.

"We are serious about our support," said Sgt. Domino Jackson.

Sgt. Jackson is in charge of employee wellness and is used to working with officers who have been through stressful situations. The incident, she explains, "affected them, but also everyone in law enforcement, and the community."

Missed the fundraiser event? There are still ways you can help!

Below are the QR codes viewers can scan with their phones to donate to the cadets impacted by last week's crash. 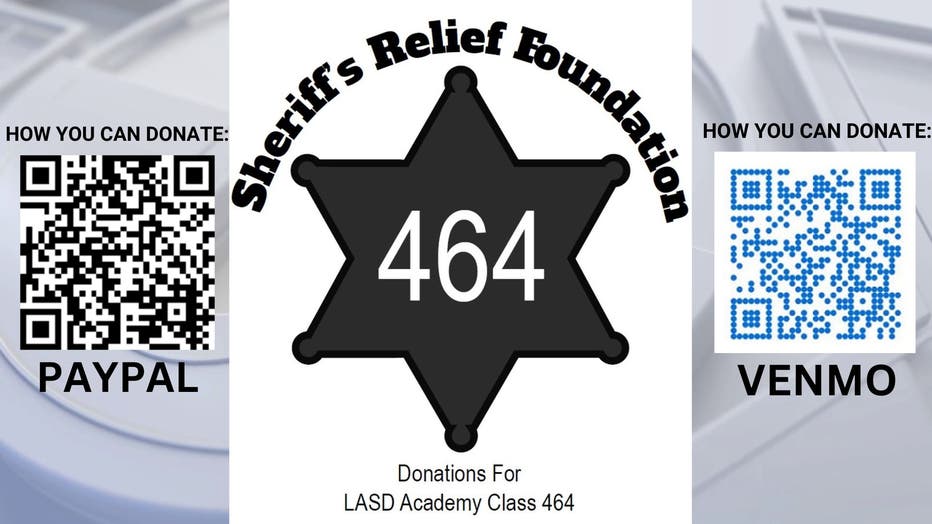 The Sheriffs Association put together ways the public can help the cadets injured in last week's crash.

The Sheriffs' Relief Association is accepting donations on behalf of LASD Academy, Class 464. Those interested in helping the recruits and their families can make checks payable to the following address:

LASD posted on its social media pages that the department's relief foundation is accepting donations on behalf of LASD Academy, Class 464. Those interested in helping the recruits and their families can make checks payable to the following address:

Checks can be mailed to the following address:

The class is made up of 75 recruits for the following department: LASD, Bell PD, Glendale PD, Pasadena PD, and the UCLA Police Department.