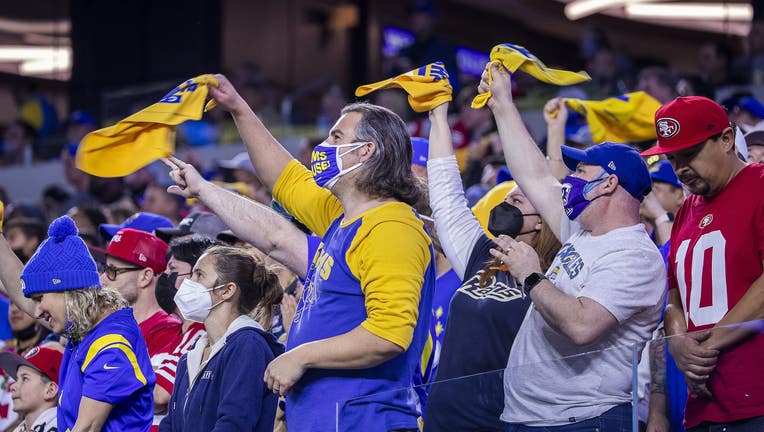 INGLEWOOD, Calif. - Super Bowl LVI is just days away. The Los Angeles Rams and the Cincinnati Bengals will descend upon SoFi Stadium Sunday afternoon, and even though it is the Rams' house, they'll be playing as the away team. Even so, they're still hoping for some home-field advantage.

While the makeup of fans in the stands has been a concern over the few months, the latest data from StubHub shows reason for optimism. The Rams limited ticket sales to just LA-residents for the NFC Championship Game against the San Francisco 49ers, perhaps hoping to avoid a repeat of Week 18 of the regular season when 49ers fans drowned out Rams faithful. Of course, the Rams got their payback just weeks later, and loud Rams fans were a factor.

According to StubHub, California buyers account for the majority of ticket sales on the platform the Tuesday before Super Bowl Sunday.

"California buyers independently accounted for more than half of the tickets sold yesterday alone and currently represent 28% of total sales on StubHub so far," said StubHub's Mike Silveira. Silveira says they expect the number of California buyers will "continue to go up as we get closer" to game day.

While more Californians continue to buy tickets, StubHub's data shows that sales to people from Ohio and Kentucky have stayed mostly the same over the last three days.

Here's where most people buying Super Bowl tickets on StubHub are from:

Obviously, there's nothing saying that all of those California fans buying tickets are Rams fans specifically, but the odds they're Bengals fans are significantly lower.

There are still more than 1,500 tickets available for the game on StubHub, the cheapest going for more than $3,600.

Kickoff is scheduled for 3:30 p.m. Sunday. If the Rams win, it'd be the team's first Super Bowl victory since 2000, and the city of Los Angeles' first since the Los Angeles Raiders won it all at the end of the 1983 season.