The race for LA mayor is still neck and neck, as Rep. Karen Bass slightly expands her lead over developer Rick Caruso.

LOS ANGELES - State Sen. Bob Hertzberg and West Hollywood City Councilwoman Lindsey Horvath remain locked in a virtual dead heat in their battle for an open seat on the Los Angeles County Board of Supervisors, a small but powerful board struggling to find solutions for a rampant homelessness problem and public safety concerns.

As votes were tallied from Tuesday's election, Hertzberg, D-Van Nuys, and Horvath almost evenly split the vote — 51% to 49% — with Hertzberg holding a slim 4,100-vote lead.

On Saturday, Horvath increased that lead to 1,500 votes.

It was unclear how many vote-by-mail and provisional ballots remain to be counted. The next two updates will be provided Saturday and Monday between 4 and 5 p.m., according to election officials. Further updates will be announced every Tuesday and Friday until all ballots are tallied. 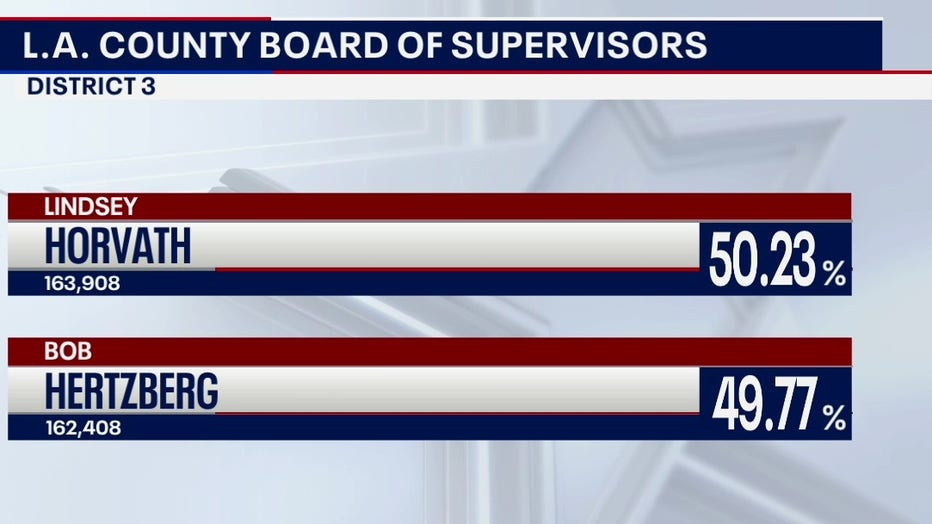 Results for the Los Angeles Board of Supervisors race as of Saturday, Nov. 12.

"I'm proud of the campaign we ran — with clear eyes about the challenges our county faces and offering real solutions," Hertzberg said in a statement Wednesday. "We built a coalition that spanned every geographic, political and demographic divide. So let's continue to count the votes. We are feeling good about where we are, but there are many more votes to count."

Horvath said in a statement she is "so incredibly proud of our people-powered campaign to bring much needed change and equity to Los Angeles County. As we saw in the primary, there are still a lot of votes left to be counted. We are optimistic we will prevail when the final results are certified."

The District 3 seat covers a majority of the San Fernando Valley, stretching from Westlake Village and Malibu to Calabasas, West Hills, Porter Ranch, San Fernando, Panorama City and Northridge, while also stretching to West Hollywood, Beverly Hills and Santa Monica. The district's boundaries changed dramatically during the county's most recent redistricting effort, giving it a larger swath of the Valley. The move that drew the ire of some observers — including outgoing Supervisor Sheila Kuehl — who felt the change gave Hertzberg an edge in the election, given his longtime representation of the area in Sacramento.

Hertzberg has been in the state Senate since 2014 and previously served in the Assembly, including a stint as Assembly Speaker.

"As a clean energy entrepreneur, state Assembly Speaker who was elected unanimously on a bipartisan vote, and Senate Majority Leader, I'm the only candidate with both meaningful business and political leadership experience," Hertzberg proclaimed on his campaign website. "At the state level, we've sent billions to L.A. County, but the county has squandered state funding I've worked tirelessly to bring home.

"Now I'm running for county Supervisor to fix the mess. I will take responsibility for solving emergencies like homelessness, crime, housing, and mental health — and make sure county government gets the job done."

Hertzberg said he will lead a "coordinated regional response" to address the homelessness issue, while backing a restructuring of the Los Angeles Homeless Services Authority and addressing root causes of homelessness by improving access to mental health services, better job opportunities and more affordable housing.

He also said he will work to increase policing, encourage collaboration between law enforcement and communities and make "serious investments" in crime-prevention measures.

Horvath also listed homelessness as a top priority of her campaign.

Horvath said she helped spearhead an "intersectional approach" to homelessness in West Hollywood, incorporating housing, services and community safety, while pushing for the production of transitional, supportive and long- term affordable housing.

Horvath has been endorsed by Kuehl and Supervisors Holly Mitchell, Janice Hahn and Hilda Solis, along with Los Angeles Mayor Eric Garcetti and the Los Angeles County Democratic Party.