LOS ANGELES - One day after an estimated 100,000 people marched through Mid-City in support of Armenia and hundreds more gathered downtown to celebrate the Lakers' NBA Finals victory, Los Angeles County health officials urged attendees on Monday to get tested for the coronavirus. 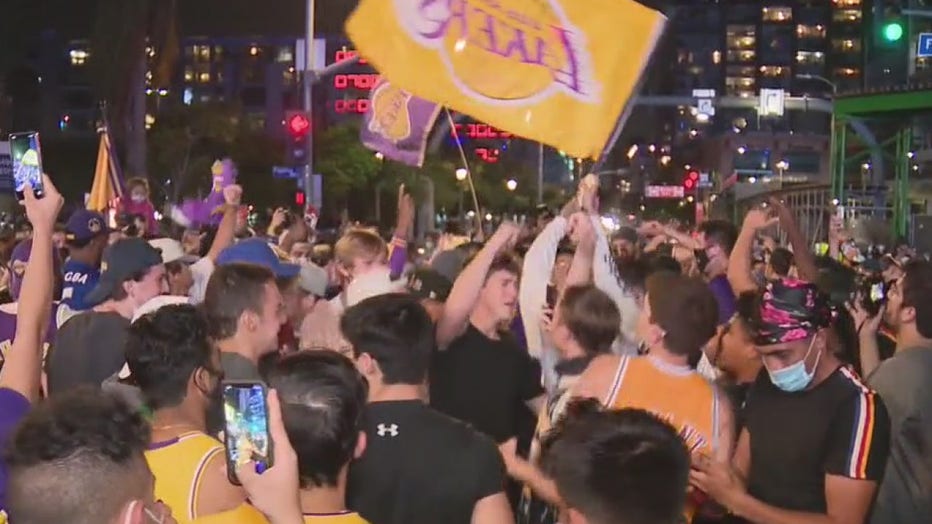 In a statement, the county Department of Public Health insisted that COVID-19 "remains easily spread among people who are in close contact with an infected person."

While not specifically mentioning either of Sunday's large gatherings, health officials called on anyone who spent time in a large crowd to get tested for the virus.

"If you were in a crowd with non-household members, especially if people weren't wearing face coverings and were shouting, chanting, and/or singing, you may have been exposed to COVID-19 if an infected person was also there," according to the county statement.

"People can pass the virus to others, even before they know they have it."

Anyone who was potentially exposed was urged to stay away from other people and monitor themselves for symptoms for the next 14 days.

"This is essential to prevent you from unintentionally spreading COVID-19 to other people," according to the county.

The warning came as the county reported two additional coronavirus-related deaths, raising the overall total during the pandemic to 6,773.

County officials noted that case numbers tend to be artificially low on Mondays, due to reporting lags over the weekend.

The low numbers are a welcome change from last week when the county saw a one-day spike of new cases topping 1,600, followed by three days of case numbers above 1,200.

In order to escape the most restrictive tier of the state's four-tier economic-reopening roadmap, the county needs to get the average daily new case number down to about 700.

Although the county's testing-positivity rate qualifies the county to move out of the state's restrictive "purple" tier, the case rate per 100,000residents remains too high. The rate needs to be no more than seven per 100,000 residents.

Since counties must meet the state requirements for two straight weeks to move up in the reopening matrix, Los Angeles County is currently unlikely to see any movement for at least two to three weeks.

The state updates county placements in the matrix every Tuesday.

As of Monday, there were 693 people hospitalized in the county due to the coronavirus, down from 715 on Sunday.

Since the pandemic began, more than 2.8 million coronavirus test results have been reported in the county, with an overall positivity rate of about 9%.

The more recent seven-day average has been much lower in recent weeks, hovering around 3%.

Over the weekend, health officials issued a reminder about regulations governing restaurants, breweries and wineries that may be showing sports playoff games -- including Sunday night's Laker game and Monday night's Dodger game.

Public Health protocols for those establishments include:
-- not allowing customers to congregate in any areas or around any televisions;
-- limiting to outdoor seating and no more than six people at a table;
-- requiring cloth face coverings whenever customers are not eating and/or drinking, including upon arrival, when walking in and exiting the facility, and when using restrooms;
-- ensuring six feet of physical distance between tables; and
-- ensuring employees interacting with customers are wearing a cloth face covering and a face shield.

After months of closure, indoor shopping malls were permitted to reopen last week, though limited at 25% of capacity and with food courts and common areas remaining closed.

Breweries and wineries were also cleared to reopen for outdoor service, provided that customers purchase meals from a third-party food concessionaire.

The state's public health director, Dr. Mark Ghaly, said Monday that officials are considering authorizing the reopening of tattoo parlors in counties that are still in the restrictive "purple" tier.

That decision hasn't been finalized, and even if the state authorizes them to resume operations, it would be up to individual counties to clear them to open.