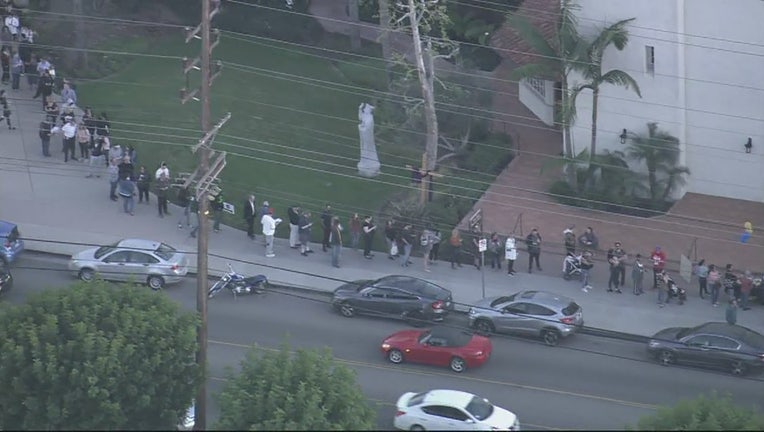 LOS ANGELES - After a disastrous roll-out that saw some voters wait in line for as long as four hours to cast ballots, questions will certainly abound Wednesday about the revamped voting system that prompted Los Angeles County's top election official to publicly apologize on election night.

The implementation of the touch-screen voting system dubbed Voting Solutions for All People was a well-intentioned effort to replace the county's five-decade-old process of collecting and tabulating ballots. But in practice during Tuesday's primary election, the combination of an overwhelming number of voters, difficulties with the electronic voter-check-in system and the questionable placement of the vote centers themselves led to dramatically long waits, some of which continued close to midnight -- four hours after the polls had technically closed.

Under state law, anyone who was in line at the poll-closing time of 8 p.m. is allowed to vote.

Voters across Southland expressed frustrations after experiencing long lines and changes at the polls on Super Tuesday.

But long lines had already formed at some of the roughly 1,000 vote center locations by mid-afternoon. The lines issue was so severe, Democratic presidential hopeful Bernie Sanders' campaign went to federal court seeking an order requiring the polls to remain open to voters who arrived at voting locations as late as 10 p.m.

The order was not granted, but even with the 8 p.m. closing time, lines persisted into the night.

Los Angeles County Registrar-Recorder/County Clerk Dean Logan went before a bank of television cameras Tuesday evening and publicly apologized to voters for the delays, saying, "there's a lot to be learned" from the experience.

Logan said the main problem at polling places was the electronic check- in system, which is used to ensure voters only cast one ballot at one location. He said once people got beyond that check-in, the actual voting system worked smoothly.

He also said the county was unprepared for the low number of voters who took advantage of the availability of early voting at the vote centers, which opened 10 days prior to the election. Only about 250,000 people voted early at the centers.

"I think that we perhaps overestimated how many of those voters would take advantage of the 10-day early voting period and that resulted in a significant amount of voters turning out on election day," Logan said. "And then the distribution of the vote centers themselves I think is something we need to look closely at as well. We know there are portions of the county where the (centers) functioned quite well today, but there were other places -- in particular in downtown L.A., Santa Monica, Carson and also particularly at our college campuses, where for the first time ever we had voting available on the campuses and where voters could actually register to vote and vote on the same day, which is a great service but it's difficult to plan for the capacity of that."

The roughly 1,000 vote centers that were open on election day was a dramatic reduction from the roughly 4,000 precincts that were offered during previous elections.