"LAX is a central pillar of our economic strength, part of the connective tissue bringing our city to the rest of the world, and we remain focused on enhancing its infrastructure, strengthening our workforce and transforming the traveler experience,'' Garcetti said.

"Even as we confront the immediate crisis of COVID-19, we are accelerating our work to devise a premier airport where visitors are greeted by reimagined terminals, workers land in good-paying jobs and the city of the future truly takes off.''

The announcement came during a ceremony to celebrate the completion the first phase of the Delta Sky Way project at LAX.

Lower passenger volumes at LAX have allowed for accelerated construction, which will allow the Sky Way to open a year-and-a-half early in mid-2023, instead of late 2024, Garcetti said. 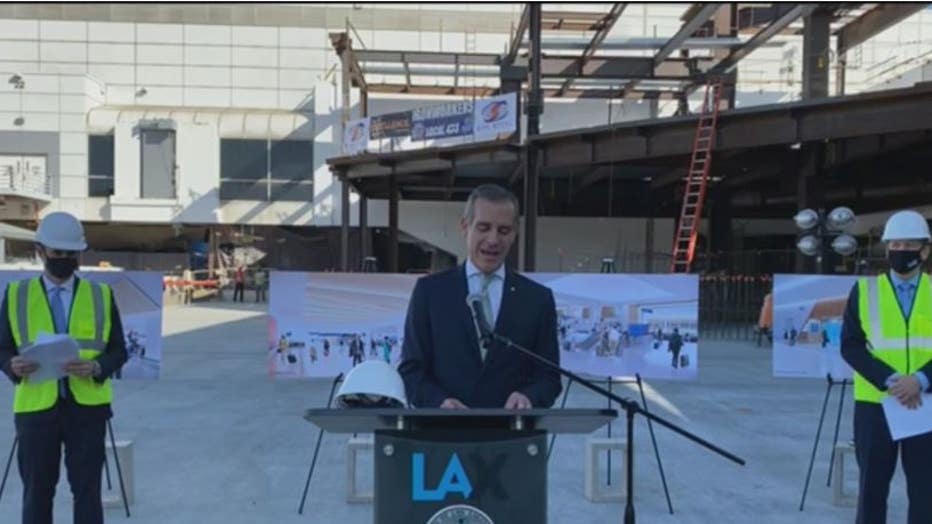 "By working in close partnership and cooperation with Delta Air Lines, Los Angeles World Airports is leveraging opportunities to create efficiencies and deliver the project ahead of schedule by more than a year,'' said Sean Burton, president of the city's Airport Commission "We are grateful to Delta and all our partners who are helping us build world class facilities worthy of our great city.''

The renovations will include a consolidated check-in lobby, security checkpoint and baggage claim facility as soon as the first quarter of 2022, LAWA officials said.

The terminal will also provide connectivity after security between Terminals 2 and 3, which is currently only accessible on foot or via shuttle bus. By 2023, the improvements will provide better access to the LAX Automated People Mover.

"If there's a silver lining to fewer people flying right now, it's that we have an opportunity and a team with the know-how to pull the future forward on infrastructure projects like Sky Way at LAX, which will deliver an exceptional experience much faster than planned for our customers and employees,'' said Delta Vice President of Corporate Real Estate Mark Pearson.

Garcetti said the Delta Sky Way project is estimated to create about 14,000 jobs in the Los Angeles region and will help generate more than $2 billion in economic output when completed.