Over 4 million fentanyl pills seized in California since April 2021

California Attorney General Rob Bonta Wednesday announced the seizure of over 4 million fentanyl pills and almost 900 pounds of fentanyl powder, along with over 200 related arrests throughout the state since April 2021.

LOS ANGELES - California Attorney General Rob Bonta announced on Wednesday the seizure of over 4 million fentanyl pills and almost 900 pounds of fentanyl powder, along with over 200 related arrests throughout the state since April 2021.

"Throughout the nation, we continue to address the impacts of the opioid crisis, and have in recent years seen a marked increase in fentanyl use and associated deaths," Bonta said in a statement.

"This crisis is a multifaceted public health and safety issue -- and addressing this crisis requires a thoughtful and strategic approach," he said. "Whether through the seizure of illicit fentanyl through our ongoing enforcement efforts or by bringing California billions of dollars through our lawsuits and investigative efforts to hold the opioid industry accountable, the California Department of Justice is all-in when it comes to protecting California families from the dangers of fentanyl."

In the Inland Empire, through the Inland Crackdown Allied Task Force, about 790,000 pills and over 36 pounds of fentanyl powder have been seized and 25 suspects arrested in the past 18 months, he said. 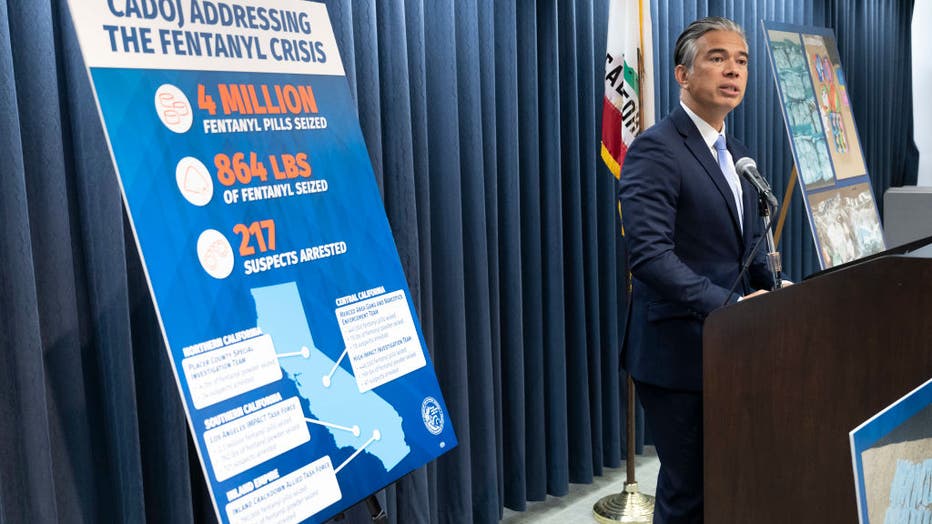 Bonta thanked "our teams and our law enforcement partners across the state for their work in taking fentanyl off our streets and out of Californian communities. There are countless lives being saved as a result of their important and difficult work."

The advances were made by the state DOJ, working through the Fentanyl Enforcement Program, a statewide enforcement initiative designed to detect, deter, disrupt, and dismantle criminal fentanyl operations and prevent the drug from reaching California neighborhoods and communities, the AG said.

Bonta said the DOJ has raked in over $32 billion through nationwide settlements, including $2 billion for California, bringing needed funding back to communities for treatment and prevention strategies.

Fentanyl is a powerful and potentially addictive synthetic opioid that is up to 50 times stronger than heroin. A small amount of fentanyl, just two milligrams, can result in overdose and potentially death. Fentanyl can be found in different forms, including pills, powder, and liquid, and is produced legally through the legal pharmaceutical market and illegally through the illicit drug market.

Illicit fentanyl has been found in many drugs, including heroin, methamphetamine, counterfeit pills, and cocaine. Fentanyl mixed with any drug increases the likelihood of a fatal overdose. The drug has also reportedly been produced in rainbow colors, potentially aimed at increasing consumption among users, especially young adults, Bonta said.

Fentanyl crisis: A look inside a SoCal DEA lab

The Drug Enforcement Agency gives FOX 11 an exclusive look inside a Southern California lab, where seized drugs are tested.

In California in 2020, 5,502 people died due to opioid overdose, and 3,946 died due to fentanyl overdose. According to the Centers for Disease Control and Prevention, the nation has experienced the overdose epidemic in three distinct but interconnected waves: an increase in deaths from prescription opioid overdoses since the 1990s, an increase in heroin deaths starting in 2010, and a more recent surge in deaths from other illicit opioids, such as fentanyl.

Through the Fentanyl Enforcement Program, the DOJ works with local and federal law enforcement partners throughout the state. In 2022-2023 budget year, DOJ secured $7.9 million for the creation of the program within DOJ under coordination of the Bureau of Investigation to expand the work, with an allocation of $6.7 million in ongoing funding.

This funding is in addition to DOJ's ongoing efforts through its Bureau of Forensic Services, which, among other things, supports law enforcement across the state by directly screening for and quantifying the amount of fentanyl present in drug offense-related samples submitted to DOJ.

Since April 2021, DOJ allied task forces throughout the state have aggressively and strategically worked to detect, deter, disrupt, and dismantle fentanyl operations and criminal enterprises, supply chain networks, and other associated criminal syndicates to prevent fentanyl from reaching California neighborhoods and communities and help those directly impacted by this public health crisis.

Prosecutors have also sought to hold opioid manufacturers and distributors who are alleged to have fueled the crisis to account, and to bring funding and relief to affected communities nationwide, including: