The teens are accused of selling the pills to high school students in Hollywood at a local park and on school grounds.

LOS ANGELES - The Los Angeles Police Department said Thursday two juveniles, ages 15 and 16, have been arrested on suspicion of selling fentanyl-laced pills resulting in the recent overdoses of high school students in the Hollywood area, including a 15-year-old girl who died on the Bernstein High School campus.

In a press conference held Thursday afternoon, LAPD Chief Michel Moore said the students purchased what they believed was Percocet at either Lexington Park or on the Bernstein High School campus. However, the drugs were laced with fentanyl. He noted they have records of overdoses among teens dating back to Aug. 26. The fall semester began for Los Angeles Unified students on Aug. 15.

Moore added that the incidents should not be classified as "overdoses" and instead the students had been "poisoned."

Two teenagers have been arrested for supplying drugs to teenagers, one of which died from overdosing.

When it comes to the dangers of consuming illicit drugs, "it's a Russian Roulette except the weapon may have one empty chamber and the rest of it are likely things that can kill you," Moore said.

He was unable to publicity identify the suspects by name due to the fact that they are minors. Both suspects are students at Apex Academy, which operates on the Bernstein High campus. Despite operating on the high school campus, the public charter school is independent of the Los Angeles Unified School District.

"Using children to harm children is the greatest crime, [it's the] greatest sin one can commit in our community," LAUSD Superintendent Alberto Carvahlo said.

Carvalho said drugs are an issue facing many schools. He added that the sale of drugs on campuses could be part of a bigger organization, in which adults are using kids as pawns in their business.

The Los Angeles Police Department said Thursday two juveniles, ages 15 and 16, have been arrested in connection with the recent overdoses of high school students in the Hollywood area, including a 15-year-old girl who died on the Bernstein High School campus.

The victim who died was identified by the Los Angeles County coroner's office as Melanie Ramos.

LA Mayor Eric Garcetti said the city "lost an angel…who was taken from us way too soon."

What we know about the suspects

The names of the suspects were not released due to their ages. They were identified simply as Suspect #1 and Suspect #2.

The first suspect is a 15-year-old boy who lives with his grandmother. The LAPD said he was arrested at 8:40 a.m. Thursday. While searching his home, investigators found him in possession of additional pills they believe to be laced with fentanyl. 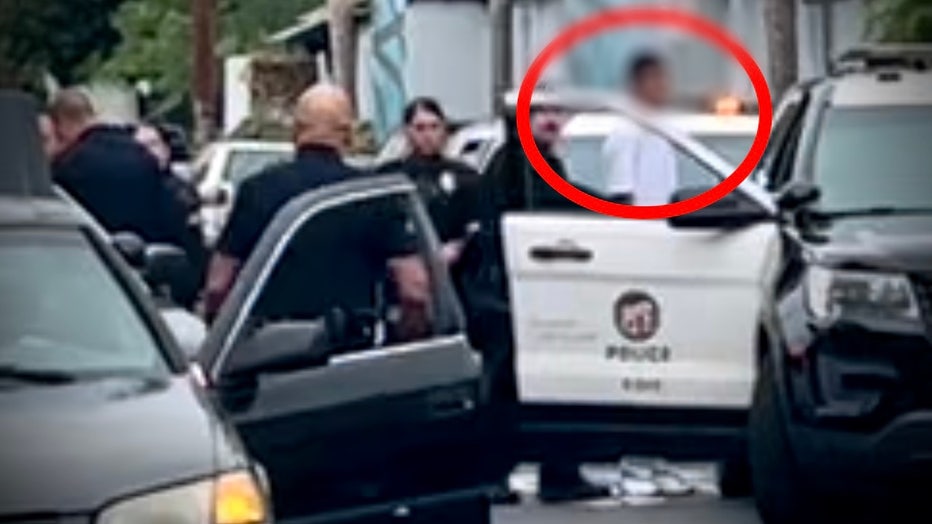 A teen suspect was arrested after a student died from fentanyl poisoning at Bernstein High School.  (Gigi Graciette / FOX 11)

He does not have an extensive criminal record and has some minor violations on his record including a curfew violation and being in possession of tobacco.

The LAPD said he sold drugs to Ramos and her friend. He faces multiple charges, including manslaughter.

The second suspect is a 16-year-old boy. Officials said he sold drugs to another victim, identified as a 17-year-old boy who attends Hollywood High School. He was arrested on the charge of the sale of narcotics.

Authorities are aware the two teens are likely working for someone else. "If you prey on our children, it will not end well for you," Mayor Garcetti said.

A Tragic Night in Hollywood

The parents of two teen girls became concerned after their daughters did not return home from school and reported them missing Tuesday evening. The stepfather of one of the girls began driving around in search of his stepdaughter and kept circling back to her school. Around 8 p.m., he found her collapsed in the courtyard of the school campus located near the intersection of North Wilton Place and Fountain Avenue.

In a fragile state, she managed to tell her stepfather she took half a pill she bought at Lexington Park.

Chief Moore said Thursday the girls crushed the pills and snorted them.

"She was very ill. She had been the victim of an overdose. She was able to communicate with him and was able to let him know that her friend was in the women’s restroom," said Lt. John Radke with the LAPD's West Bureau Homicide Unit.

The stepfather then contacted a school employee. They entered the restroom where they found another 15-year-old student who was unresponsive. They called 911 and rendered aid until paramedics arrived. Despite their best efforts, Ramos was declared dead at the scene by Los Angeles Fire Department paramedics.

Psychologist Dr. Laura Berman, who lost her son to fentanyl poisoning, discusses the recent poisonings at a Hollywood high school that killed one student

That same night, LAPD detectives also discovered there were at least two other victims of drug overdoses that they initially believed were connected to the same drug dealer.

A 17-year-old boy who attends Hollywood High School was taken to the hospital from a different location and reportedly purchased drugs at the same park. In addition, police were informed of another teen victim with signs of an overdose in the same area.

Los Angeles Unified School District Superintendent Alberto Carvalho says the three victims from Tuesday night account for six cases of drug-related incidents stemming from drugs purchased in the Hollywood area in recent weeks and issued a stern warning to the person responsible for selling drugs to the teens.

"For the individual, who, for a number of weeks, has been spreading pain, destruction and now death – rest assured, we’re going to use the full weight and muscle of this school system, the full weight of this city’s law enforcement entity, and the DEA to know who you are, who the people behind you are and we shall bring justice to the grieving parents," Carvalho said.

Lt. Radke is hoping parents will warn their children about the dangers of taking drugs amid the ongoing opioid epidemic.

"They need to sit down and talk with their children. They need to talk to them about the consequences of taking anything from someone that they do not know. It puts their life in jeopardy," Lt. Radke said.