LOS ANGELES - Anti-war activists and their supporters staged a demonstration in downtown Los Angeles Saturday to voice their opposition to war
against Iran, following Thursday's U.S. killing of a top Iranian military official in Baghdad, Iraq.

The ANSWER Coalition, Code Pink and Veterans for Peace organized the rally at Pershing Square, calling for no war on Iran, an end to
economic sanctions on Iraq and an immediate withdrawal of U.S. troops from the region.

At least 200 people gathered to hear speakers, then marched to the Roybal Federal Building to continue the rally, organizer John Prysner said.

They carried signs, including one that read "No War on Iran'' and a banner that said "Trump: the People Say No War on Iran.''

Meanwhile in Westwood demonstrators gathered in front of the federal building on Wilshire Blvd. to celebrate the death of Gen. Ghasem Soleimani. Protesters say he is responsible for the killing of thousands of Iranians, Syrians and American soldiers.

Insisting there is no known credible threat to the Southland, Los Angeles police and the county sheriff's department are both closely monitoring developments in the Middle East following Thursday's air strike. 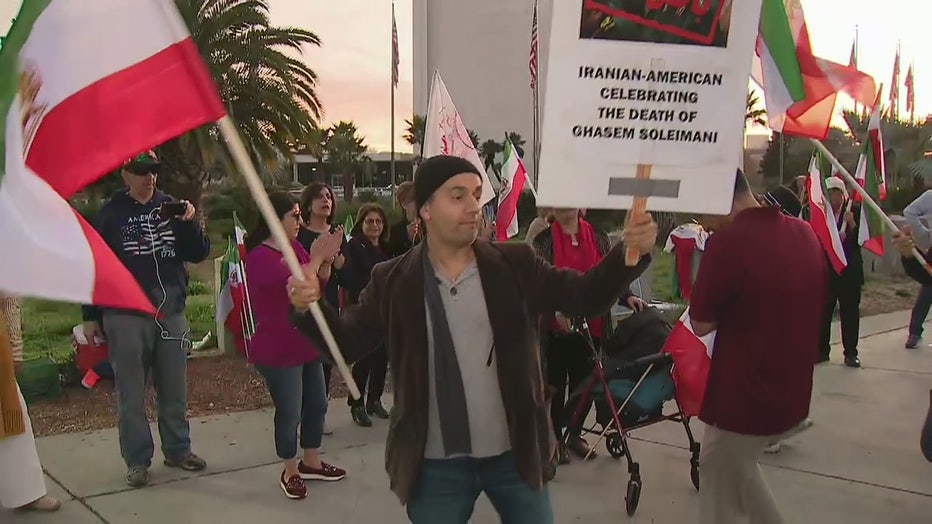 "Nearly every nationality in the world can be found in the county of Los Angeles,'' Sheriff Alex Villanueva said in a statement Friday.

"Keeping all residents and visitors safe is always a top priority. We at Los Angeles County Sheriff's Department are aware of the unfolding events in the Middle East. At this time, there are no specific credible threats to the Los Angeles area,'' he said. "Our sheriff's Intelligence Unit is working with our local, state and federal partners to monitor and investigate any potential threats should they arise.''

Villanueva's comments echo a statement issued Thursday night by the Los Angeles Police Department, which said, "While there is no credible threat to Los Angeles, the LAPD is monitoring the events developing in Iran.''

"We will continue to communicate with state, local, federal and international law enforcement partners regarding any significant intel that may develop,'' according to the LAPD. "This department is committed to ensuring the safety of our vibrant and diverse community, and we ask every Angeleno to say something if you see something.''

"Due to heightened tensions in Iraq and the region, we urge U.S. citizens to depart Iraq immediately. Due to Iranian-backed militia attacks at the U.S. Embassy compound, all consular operations are suspended. U.S. citizens should not approach the Embassy,'' according to the U.S. State Department.