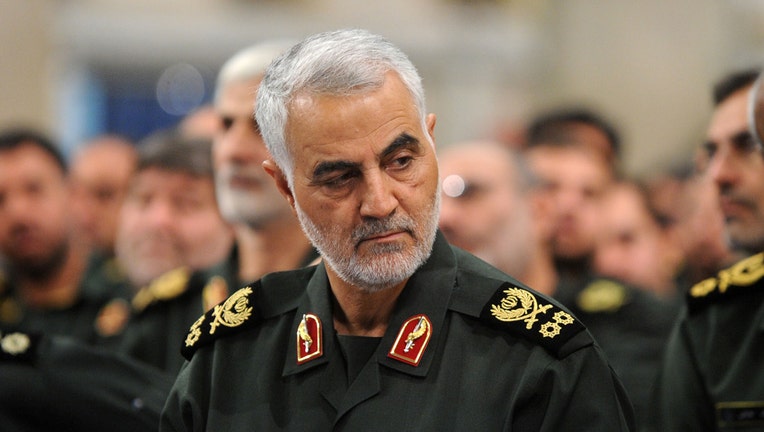 Soleimani is the military mastermind whom Secretary of State Mike Pompeo had deemed equally as dangerous as Islamic State leader Abu Bakr al-Baghdadi. In October, Baghdadi killed himself during a U.S. raid on a compound in northwest Syria, seven months after the so-called ISIS "caliphate" crumbled as the terrorist group lost its final swath of Syrian territory in March.

In April 2019, the State Department announced Iran was responsible for killing 608 U.S. troops during the Iraq War. Soleimani was the head of the Iranian and Iranian-backed forces carrying out those operations killing American troops. According to the State Department, 17 percent of all deaths of U.S. personnel in Iraq from 2003 to 2011 were orchestrated by Soleimani.

As recent as 2015, a travel ban and United Nations Security Council resolutions had barred Soleimani from leaving Iran.

In all, at least seven people were killed and at least three rockets were fired, officials told The Associated Press.

There was no immediate comment from Iran. Hours after the attack was announced, President Trump tweeted a simple image of the American flag.

Soleimani was the long-running leader of the elite intelligence wing called Quds Force – which itself has been a designated terror group since 2007, and is estimated to be 20,000 strong. Considered one of the most powerful men in Iran, he routinely was referred to as its “shadow commander” or “spymaster.”

"Soleimani is our leader" had been photographed spray-painted on windows by Iran-backed militiamen at the U.S. Embassy in Baghdad.

An official, speaking on condition of anonymity, said al-Muhandis had arrived to the airport in a convoy to receive Soleimani whose plane had arrived from either Lebanon or Syria. The airstrike occurred as soon as he descended from the plane to be greeted by al-Muhandis and his companions, killing them all.

As recent as 2015, a travel ban and United Nations Security Council resolutions had barred Soleimani from leaving Iran.

A senior politician said Soleimani's body was identified by the ring he wore.

The PMF blamed the United States for the attack.

Local reporters had suggested that pro-Iran military leaders may have been targeted, but officials have not yet confirmed all of the dead and who may have been behind the attack. An official with PMF told The Associated Press one of the victims was its airport protocol officer, identifying him as Mohammed Reda.

The nighttime attack occurred amid tensions with the U.S. after an Iran-backed militia attacked the U.S. Embassy in Baghdad, which was targeted Tuesday by angry mobs who were protesting recent U.S. airstrikes.

The two-day siege outside of the U.S. Embassy in Baghdad came to an end Wednesday afternoon after dozens of pro-Iran militiamen and their supporters withdrew from the compound.

The crisis started early Tuesday, when, in an orchestrated assault, hundreds of protesters stormed the embassy compound, one of the most heavily fortified U.S. diplomatic missions in the world.

President Trump, who on Tuesday night vowed that the situation "will not be a Benghazi" -- a pointed reference to the deadly 2012 attack on the U.S. consulate in Libya on the Obama administration's watch, ordered deployment of about 750 U.S. soldiers to the Middle East.

The embassy attack, one of the worst in recent memory, followed deadly U.S. airstrikes on Sunday that killed 25 fighters of the Iran-backed group, the Kataeb Hezbollah. The U.S. military said the airstrikes were retaliation for last week's killing of an American contractor in a rocket attack on an Iraqi military base, which the U.S. blamed on the militia.

Secretary of Defense Mark Esper reacted on Thursday to the U.S. Embassy attack in Iraq earlier this week, saying that it's time for Iran to start "acting like a normal country.”

“We are there in Iraq working with our Iraqi partners to ensure the enduring defeat of ISIS,” Esper said on “America’s Newsroom” on Thursday.

“Through the president's direction, we were able to physically defeat the caliphate that remains physically defeated, if you will," he added. "And now, our aim is to deter further Iranian bad behavior that has been going on now for over 40 years. It's time that Iran started acting like a normal country.”