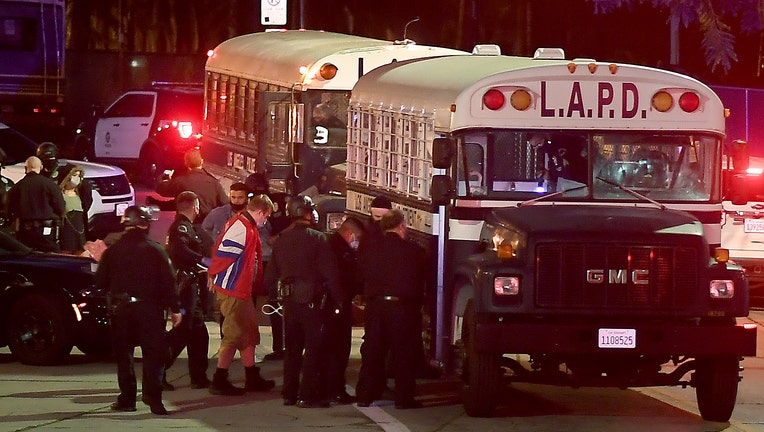 LOS ANGELES - Los Angeles police insisted Friday they acted quickly to identify and release members of the media who were detained while covering another night of protests outside Echo Park, where the city has been working to clear a homeless encampment to make way for a renovation project.

At least four reporters were detained following a police declaration of an unlawful assembly outside the park Thursday night.

James Queally of the Los Angeles Times was covering the protest when he was detained along with protesters after police issued a dispersal order for the area. Kate Cagle, a reporter and anchor for Spectrum News 1, was also detained by officers after she identified herself as a reporter and showed officers her L.A. County press pass, she said. Two reporters for Knock L.A., Jonathan Peltz and Kate Gallagher, were also arrested during the protest sometime before 9:45 p.m., according to the nonprofit news organization, which announced their release shortly before 1 a.m Friday.

At least four reporters were detained following a police declaration of an unlawful assembly outside the park Thursday night.

Queally and Cagle both said their hands were zip-tied.

Police made arrests -- including a newspaper reporter -- after they ordered a large crowd in Echo Park to disperse Thursday night.

According to Queally, legal observers -- independent lawyers in the crowd who monitor police conduct and arrests, often identified by their lime green hats -- were also arrested.

LAPD officials issued a statement early Friday saying the unlawful assembly was declared when "instigators" in the crowd of protesters "demonstrated a willful intent to disrupt the peaceful activity and began to use strobe lights against the officers."

Police said the declaration was announced at least five times.

With each announcement to disperse, "a request was made for each member of the media to identify themselves, remove themselves from the crowd, and walk to the pre-identified Crespo location at Park Avenue and Glendale Boulevard.

"The protesters failed to disperse, requiring officers to safely establish containment and begin detaining individuals one by one."

As officers learned that credentialed and non-credentialed journalists were part of the group being detained, Media Relations Division officers were called in to identify the media members "and they were released at the scene without being arrested."

"The department requests that media personnel follow the lawful orders of officers at the scene of any demonstration which has been declared unlawful, as delineated in California Penal Code (section) 409. In this incident, it was noted that most members of the media remained at the pre- designated Crespo location as requested."

Queally was later released "after inquiries by Times editors and its attorney," the paper reported.

"I'm not blind to the fact that crowd control situations are difficult," Queally tweeted shortly before midnight. "I'm not even mad I was initially detained. But once I was in custody, not a threat to anyone, zip tied, and displaying creds ... that should have been game over. It wasn't. More than one officer asked why I didn't stay in the 'media pen.' I went over to the media pen, by the way. Media pens are deliberately setup to keep reporters AWAY from news. Tonight was no different. It was nowhere near the protests or action in the park."

"I'm a cop's kid. Policing is hard. I have a lot of respect and sympathy for officers. But the LAPD has a long history of problematic behavior with protests & crowd-control situations. This is something that desperately needs fixing, and not just because I got zip-tied for an hour," he said.

The American Civil Liberties Union released a statement Friday blasting the department's forceful removal of unhoused people in the park and the detentions of journalists and legal observers.

"Mass arrests of protesters, legal observers and journalists will not keep the city's brutal, ill-conceived actions from being known. The city leaders who approved this approach should be held accountable," according to the ACLU.

The Society of Professional Journalists Greater Los Angeles Chapter released a statement saying, "In at least one case, an LAPD sergeant declined to release a reporter even after being presented with his press credentials. This is only the latest incident in Southern California where credentialed journalists, carrying out their constitutionally protected reporting activities, have been mistreated by law enforcement. The Board of Police Commissioners must open an inquiry into the officers' actions, determine what additional training is needed and establish policies that ensure the LAPD correctly identifies members of the news media at breaking news events and allows them to have freedom of movement to cover those events."

Councilman Mike Bonin called the police response, including the arrest of journalists, "a disgrace."

"A neighborhood in lockdown. Hundreds of cops in riot gear. Reporters being zip-tied and detained. Protesters being kettled and arrested. This is a disgrace and it did not have to happen. It's a shameful day for Los Angeles," he said on Twitter.

Councilman Kevin de Leon called for the police department to change the way it deals with journalists.

"James Queally and Kate Cagle should never have been detained. Glad they're released but detaining reporters who are on the job covering news is a violation of the 1st Amendment. LAPD must revise their protocols when dealing with journalists," he said.