Los Angeles City Councilman Mitch O'Farrell provided an update about the city's efforts to clear a homeless encampment in Echo Park for what's being described as more than half a million dollars in repairs.

LOS ANGELES - A citywide tactical alert was issued Wednesday night as Los Angeles police in riot gear declared an unlawful assembly and order to disperse as hundreds of advocates for the homeless gathered in Echo Park.

Activists are protesting plans by the city to clear a large homeless encampment from the park and close the area for what's being described as more than $500,000 in repairs.

Video from the scene showed protesters pushing back against officers who moved in to clear the area.

Glendale Boulevard, south of Sunset Boulevard, was closed around 8 p.m. as smoke bombs were thrown at police, 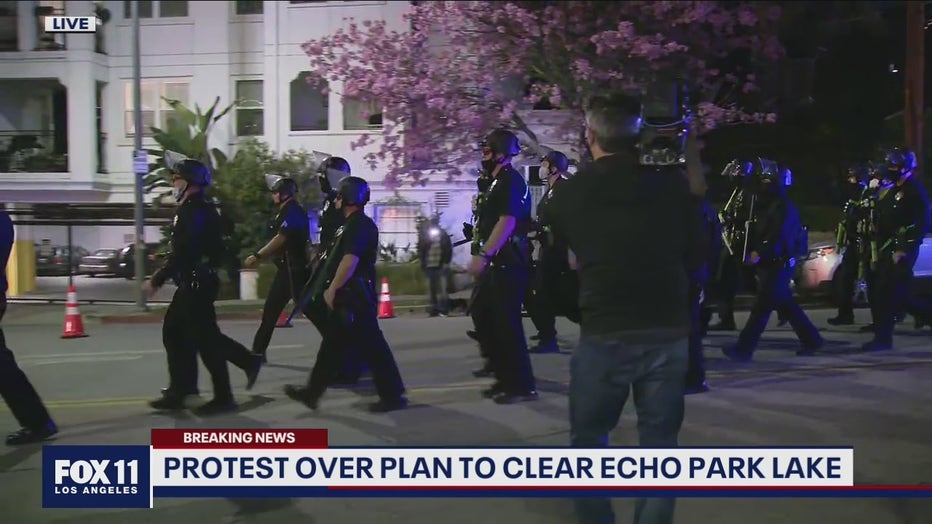 Two unlawful assemblies were declared and dispersal orders were issued at Santa Ynez Street and Glendale Blvd due to officers being assaulted with rocks, bottles and smoke bombs.

Police were stationed overnight, according to the Los Angeles Police Department.

On Thursday morning, the LAPD issued a statement regarding the shutdown of Echo Park that said in part:

"Though there was verbal confrontations from protestors, it remained a largely peaceful protest. After expressing their 1st amendment rights, all protests voluntarily left the area. LAPD only made one arrest for failing to comply with a police officer and two minor use of forces have been reported as of this morning. No reports were made to the LAPD of injuries to demonstrators, members of the public and there were no officers injured."

The police department says no injuries were reported and only one arrest was made for failing to comply with orders.

The police department issued another statement Thursday afternoon saying, "This initiative is led by elected officials and service providers who are working arduously to provide a safe alternative to the park and the LAPD has been asked to support these efforts. The park is currently secured and the individuals experiencing homelessness inside the location are free to leave voluntarily or take advantage of the housing being offered."

According to Los Angeles City Councilman Mitch O'Farrell's office, the work will include repairs to damaged lighting and plumbing, removal of hazardous material and public safety improvements.

Hundreds have gathered at Echo Park to protest plans by the city to clear a large homeless encampment. Protesters have clashed with police.

Homeless residents have been given vouchers and have been offered hotel rooms, housing and meals.

"This is happening in many parts of the city where the homeless have taken these locations," said police specialist Dennis Zine. "This is what they consider their residence, they want to stay there and they don’t want the police to move them out."

Hundreds of advocates for the homeless gathered at Echo Park Lake today to protest plans by the city to clear a large homeless encampment from the park and close the area for what's being described as more than a half-million-dollars in repair work.

One advocate said people living in the park "got hit worse by the pandemic, by the situations of life,'' and did not deserve to be swept out without alternatives. Although the city has said housing would be found, those gathered Wednesday morning had their doubts, with one saying there was "no guarantee'' the city would find "somewhere safe'' for people to live.

Garcetti said that he's "been very, very impressed'' by the number of park residents who have been placed into housing. He claimed that though there are 120 tents left in the park, only 19 people were still living there as of last weekend, and that there is a safe hotel room available for every single person in the park.

"We're asking all the folks -- (the Los Angeles Homeless Services Authority), Urban Alchemy, some of the other great nonprofits and volunteer groups -- to continue helping to make sure 100% of people know there is a placement,'' he said, adding that there is a small percent of people who decline placements.

Many protesters carried signs with slogans such as "Services not sweeps'' and "House keys, not handcuffs.''

A resident of the park called into the City Council meeting Wednesday to tell council members that the park's residents are "tired of basically being treated like we're nobodies.''

"We're tired of being treated like we're less than human all because of a pandemic and the consequences of the pandemic has caused a couple of people to lose their houses,'' she said.

She added that housing is a human right.

Homeless advocates have argued that the U.S. Centers for Disease Control and Prevention advises against clearing encampments during the COVID-19 pandemic, because it could "cause people to disperse throughout the community and break connections with service providers. This increases the potential for infectious disease spread.''

O'Farrell told reporters during an unrelated news conference Tuesday that the city will follow all U.S. Centers for Disease Control and Prevention guidelines when preparing the park for the renovation work, and efforts are being made to find housing for everyone who has been living there since January.

Activists gathered at Echo Park Lake on the morning of March 24 ahead of the city's plans to close the park where well more than a hundred people have taken up residence.&nbsp;&nbsp;

He did not provide details about what type of housing would be provided or when it would happen, but said the city previously housed more than 100 of the park's residents. He said Wednesday morning that more than 120 people had now been moved into transitional housing, including Project Roomkey and Project Homekey sites.

The park's homeless community -- which includes a vegetable garden, working showers and a kitchen -- has been praised by activists as a self-run, diverse community of housed and unhoused residents of the neighborhood.