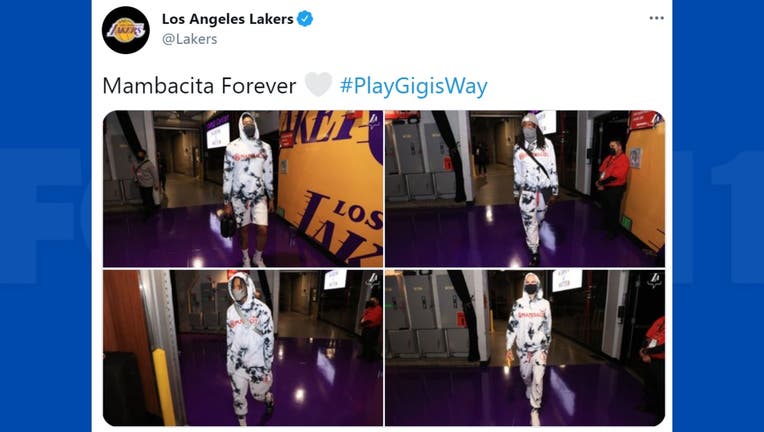 LOS ANGELES - Just hours after Vanessa Bryant launched a clothing line to celebrate her late daughter Gianna's birthday, stars across the NBA – as well as the Los Angeles Lakers – were spotted rocking the new gear.

The leaguewide tribute comes as Vanessa Bryant unveiled the athleisure line Mambacita on May 1, what would have been Gianna "Gigi" Bryant's 15th birthday.

Prior to their game against the Toronto Raptors, the Lakers players all entered Staples Center showing support for Mambacita, rocking the marble-patterned hoodies pregame.

The tribute from the NBA circles extended beyond the Lake Show as superstar guard Kyrie Irving bought the hoodies for all of his Brooklyn Nets teammates to wear to show the Bryant family some love.

"It's tough because it's obviously a reminder of what happened," Curry said in a video published by the Warriors on social media. "But it's also a celebration of Gianna's life and what the game of basketball meant to her and carrying that legacy in her honor."

NBA Hall-of-Famer Allen Iverson also sported the gear, with the caption, in part, "God bless all the Mambacitas of the world." Iverson and Gianna's father Kobe Bryant had plenty of battles in the late 1990s and up until Iverson's retirement from the NBA after the 2011 season.

The new athleisure line was released just days after it was revealed that Nike and Kobe Bryant's estate allowed their contract to expire. Before the shoe deal expired in Spring of 2021, Bryant had signed with Nike in the early 2000s after starting his NBA career with Adidas in 1996.

All proceeds go to the Mamba and Mambacita Sports Foundation, a nonprofit dedicated to helping underserved athletes and young women in sports.