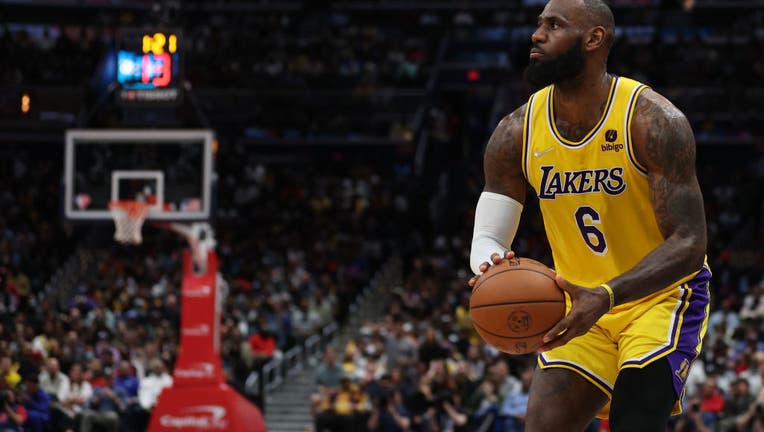 WASHINGTON, DC - MARCH 19: LeBron James #6 of the Los Angeles Lakers in action against the Washington Wizards at Capital One Arena on March 19, 2022 in Washington, DC (Photo by Patrick Smith/Getty Images)

The Los Angeles Lakers superstar moved into second place on the NBA's all-time regular-season scoring list, passing Utah Jazz legend Karl Malone. James, who has the most points in NBA history when combining regular season and playoff numbers, has 36,947 points in the regular season.

RELATED: Lakers' LeBron James is 'p----- off' he's not mentioned as one of NBA's greatest scorers

He is only 1,440 points shy of tying Abdul-Jabbar, who finished his illustrious NBA career with 38,387 points between the Lakers and Milwaukee Bucks.

James, 37, finished Saturday's game with 38 points, but Los Angeles was unable to pick up the win against the Washington Wizards. The Wizards won 127-119.

RELATED: ‘The Lakers are such wussies’: Charles Barkley rips management for team’s woes

"Obviously at some point I'll be able to look back at this moment, but right now the feeling I have — I can't separate it," James told reporters after the game. "We had a great opportunity to pick up some more momentum."

James made clear he was still focused on trying to guide the Lakers back to the postseason.

"I will not allow myself to think about it. I've always just played the game the way I've been playing it over the years, and these things have just happened organically by just going out and playing the game the right way. Hope to accomplish that at some point in my career, but I won't think about it too much," he added.

The Lakers are in 9th place in the Western Conference with a 30-41 record. The San Antonio Spurs are only three games behind them for that spot.