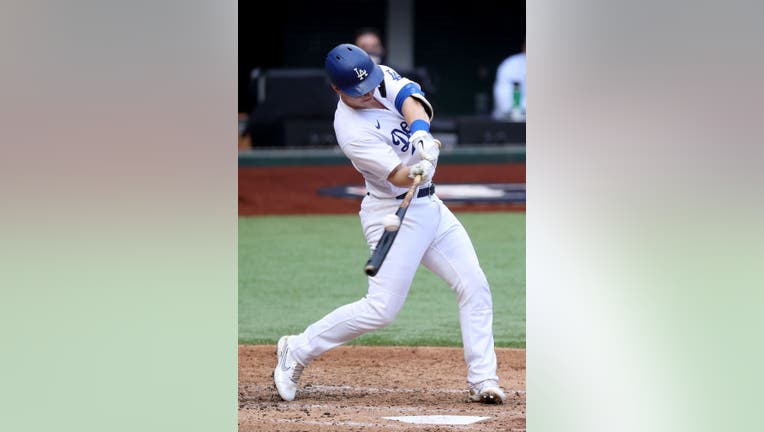 ARLINGTON, TEXAS - OCTOBER 17: Will Smith #16 of the Los Angeles Dodgers strikes out against the Atlanta Braves during the third inning in Game Six of the National League Championship Series at Globe Life Field.(Photo by Tom Pennington/Getty Images)

LOS ANGELES - The Los Angeles Dodgers have little time to rest following their season-saving victory over the Atlanta Braves, as they face another elimination game on Saturday in Game 6 of the National League Championship Series.

The Dodgers avoided postseason elimination with a 7-3 victory as Will Smith and Corey Seager hit three-run homers in a 3-hour-45-minute game that ended at 11:53 p.m. Central Daylight Time on Friday in Arlington, Texas.

The first pitch Saturday is set for 1:38 p.m. Pacific Daylight Time with Dodgers ace Walker Buehler facing left-hander Max Fried in a rematch of the Game 1 starters. Neither pitcher figured in the decision in the Braves' 5-1 victory.

Fried is a 2012 graduate of Harvard-Westlake School and was the seventh overall selection by the San Diego Padres in that year's MLB draft.   The Braves acquired Fried in a six-player trade on Dec. 19, 2014, sending outfielder Justin Upton and minor league pitcher Aaron Northcraft to San Diego.

Atlanta also received the second baseman Jace Peterson and minor league outfielders Dustin Peterson and Mallex Smith.   After allowing runs in the first and second innings Friday, the Dodgers took a 4-2 lead on Smith's three-run homer with two outs in the sixth off his namesake reliever Will Smith.

The Dodgers added three runs in the seventh on Seager's home run. He hit a solo homer in the fourth for the Dodgers' first run.

The victory reduced the Braves' lead in the best-of-seven series to three games to two. Game 7, if necessary, would be played Sunday.

Atlanta appeared to take a 3-0 lead in the third when Marcell Ozunaslid into home after right fielder Mookie Betts caught Dansby Swanson's sinking fly ball just before it hit the ground.   However, the video replay indicated Ozuna left third before the catch and was ruled out to end the inning.

Blake Treinen, the third of seven Dodgers pitchers, was credited with the victory, pitching two hitless innings, with one strikeout.   The six Dodgers relievers combined to limit the Braves to one run and four hits over the final seven innings.   Smith, the fourth of six Atlanta pitchers, was charged with the loss, allowing two runs and one hit with one walk in one-third of an inning.

The Braves opened the scoring in the first. Freddie Freeman, a 2007graduate of El Modena High School in Orange, doubled with one out, moved to third on Smith's passed ball and scored on a sacrifice fly by Travis d'Arnuad.

Atlanta increased its lead to 2-0 in the second.   Rookie right-hander Dustin May walked Swanson, the leadoff hitter, on a full count.

Swanson moved to third one out later on Nick Markakis' single and scored one batter later when Cristian Pache, the No. 9 hitter in the Braves lineup, singled.

Atlanta scored its other run in the eighth. Freeman led off with a double, moved to third on Ozuna's flyout and scored on d'Arnuad's ground out.

May, the Dodgers starter, allowed two runs (one unearned) and three hits in two innings, struck out three and walked two. The runs were the first he allowed in the 2020 postseason after pitching 4 2/3 shutout innings entering Friday's game.

Left-hander A.J. Minter started for the Braves, pitching three shutout innings, allowing one hit and striking out seven in his first professional start after 216 regular-season appearances in the major and minor leagues, all in relief.

Minter was the first pitcher in major league history to make his first career start in the postseason, according to the Elias Sports Bureau.

History is against the Dodgers completing their comeback attempt and advancing to the World Series for the third time in four seasons.

Of the 87 MLB teams that trailed a best-of-seven series three games to one through the 2019 World Series, only 13 have rallied to win, most recently the Chicago Cubs over the Cleveland Indians in the 2016 World Series.

This is the 10th time the Dodgers have trailed a postseason series three games to one. They have never overcome that deficit.

The series is being played at Globe Life Field.

The final three rounds of baseball's postseason are being played at neutral sites in an attempt to reduce the possibility of spreading the coronavirus.