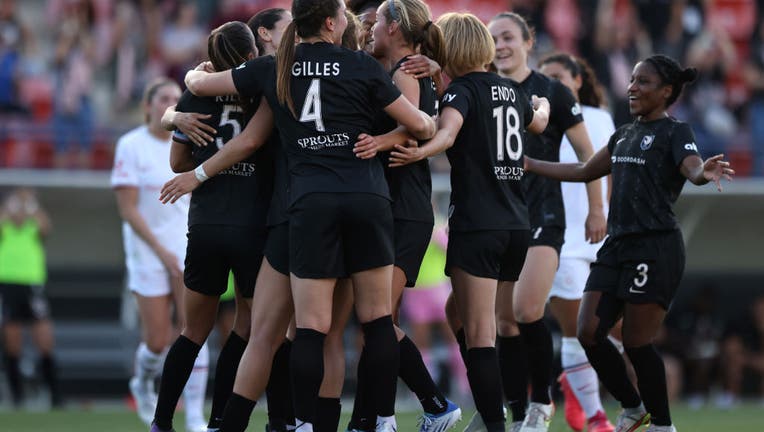 FULLERTON, CALIFORNIA - APRIL 24: Angel City FC celebrates a goal by Christen Press #23 of Angel City FC on a penalty kick against the Portland Thorns FC as part of the 2022 NWSL Challenge Cup at Titan Stadium on April 24, 2022 in Fullerton, Californ

"This is a day that has been two years in the making and we are beyond thrilled that it is finally here," ACFC team president and co-founder Julie Uhrman told City News Service. "This is a moment in time when people are finally seeing the value of women's sports.

"Our fans are incredible. We sold thousands of season tickets before we even had one player let alone a full roster and that is meaningful. It shows that this city is hungry for women's soccer and that these athletes deserve this kind of attention and fandom."

Angel City bills itself as "not just another football club."

"We are building a different type of organization -- where mission and capital come together," the team said on its website. "Where you can feel our impact on and off the field. We were born on the streets of Los Angeles and stand side by side with our community.

"Football is our passion and the vehicle through which we speak to our community and passionate followers. Our purpose is to set higher expectations and it guides us to strive for better in everything we do. Our purpose unites us all as we soar higher together, every day."

Christen Press, who was raised in Palos Verdes Estates and played on the U.S. teams that won the 2015 and 2019 FIFA Women's World Cup, was the first player acquired by ACFC, obtained Aug. 23, 2021, in a trade with Racing Louisville.

Press, alumnus of Chadwick School on the Palos Verdes Peninsula, is among four ACFC players to have played for high schools in Los Angeles or Orange counties, along with defender Ali Riley (Harvard-Westlake) and midfielders Lily Nabet (Chaminade) and Dani Weatherholt (San Clemente).

ACFC was 1-4-1 in the NWSL Challenge Cup tournament, finishing last in the four-team West Division and had a league-worst-equaling minus-seven goal differential. North Carolina won the East Division with a 3-0-3 record and plus-five goal differential, advancing to the semifinals, which will be played Wednesday.

The Courage was 9-6-9 in 2021, the sixth-best-record in the then 10- team league, and lost to the Washington Spirit, 1-0, in overtime in a first- round playoff game. Midfielder Rylee Baisden is an alumnus of Esperanza High School in Yorba Linda and Pepperdine. Its roster also includes two UCLA alumni, goalkeeper Katelyn Rowland and midfielder Taylor Smith.

Gates will open at 6 p.m. The pregame show will begin at 6:30 p.m. and will culminate with a live performance of the club's hype anthem, "Running with the Angels," performed by Brittany Howard, best known for being the lead vocalist, guitarist, and main songwriter of rock bands Alabama Shakes, Thunderbitch and Bermuda Triangle, the rapper-musician Tia P. and a 40-piece marching band.

The performance of the hype anthem will be shown as part of the pregame show on cable's CBS Sports Network. The kickoff is set for 7:30 p.m.

"We know how Friday traffic can be so please get here early because you're not going to want to miss a moment of making history with us," Uhrman said.