Prosecutors: Mercedes-Benz driver was in 13 crashes before Windsor Hills

Prosecutors are accusing the Mercedes-Benz driver of being involved in 13 other crashes before last week's fiery wreck in Windsor Hills.

Six people were killed in the violent wreck at the intersection of S. La Brea Avenue and Slauson Avenue. The dead include 23-year-old Asheray Ryan, her almost-one-year-old son Alonzo, her unborn son and the father of that unborn child, as well as two others. Gascón said his office cannot file the manslaughter charge in a case involving an unborn child.

The DA said the case was still under investigation, and wouldn't discuss all of the details, but when asked if Linton was driving under the influence Gascón said, "There is no evidence of any alcohol use at this point."

Nicole Litton was charged with six counts of murder and five counts of gross vehicular manslaughter for her role in a fatal crash in Windsor Hills last Thursday.

At the site of the crash on S. La Brea and Slauson, a makeshift memorial continues to grow.

"I was on that street there," Latricia Tucker said, adding it happened, "right in front of my face."

Tucker says last Thursday she saw the speeding car and watched in shock as driver Linton crashed into two cars. One burst into flames. Had Tucker not stopped for a salad before getting to the intersection she believes she could have been killed.

Gascón says his office's "... preliminary investigation shows that Linton may have been traveling at approximately 90 miles an hour when she ran through a solid red light."

Linton was arrested on suspicion of vehicular manslaughter as soon as she got out of the hospital last week. Jail records show she was held on a $9 million bail at the Century Regional Detection that was initially set at $2 million.

During a court appearance on Monday, tears could be seen rolling down crash suspect Nicole Linton's face. The suspect behind the wheel of the deadly crash was in a wheelchair with a brace on her arm due to injuries she sustained during the crash. This comes just days after she was treated at the Ronald Reagan UCLA Medical Center.

During her first court appearance on Monday, tears could be seen rolling down Linton's face. The suspect behind the wheel of the deadly crash was in a wheelchair with a brace on her arm due to injuries she sustained during the crash. This comes just days after she was treated at the Ronald Reagan UCLA Medical Center.

If convicted as charged, Linton faces up to 90 years to life in prison. She was not given bail at her hearing, so her next dates in court will involve a bail review. Linton will be back in front of a judge on August 15, then her arraignment will resume on October 26.

Tragedy strikes on Thursday afternoon: ‘It looks like a war zone’

On the afternoon of Aug. 4, crews with the Los Angeles County Fire Department were called to the intersection of La Brea and Slauson avenues on what was initially reported as a fire. When firefighters arrived at the scene, they discovered the horrific eight-vehicle crash.

Surveillance video that captured the fiery collision shows the driver of a Mercedes-Benz speeding through the intersection at what investigators estimate to be 90 mph. In addition, Linton did not appear to brake, authorities said.

Upon impact, Linton’s Mercedes-Benz and two other vehicles erupted into flames. The violent wreck came to a stop at the southwest corner of the intersection after at least one vehicle struck a gas station sign.

Bystanders tried to help those trapped but couldn't get close.

"The worst thing is we can help nobody because the fire was out of control," a witness told FOX 11.

Images from SkyFOX show at least two burned vehicles, one of which split in half after crashing into a pole. 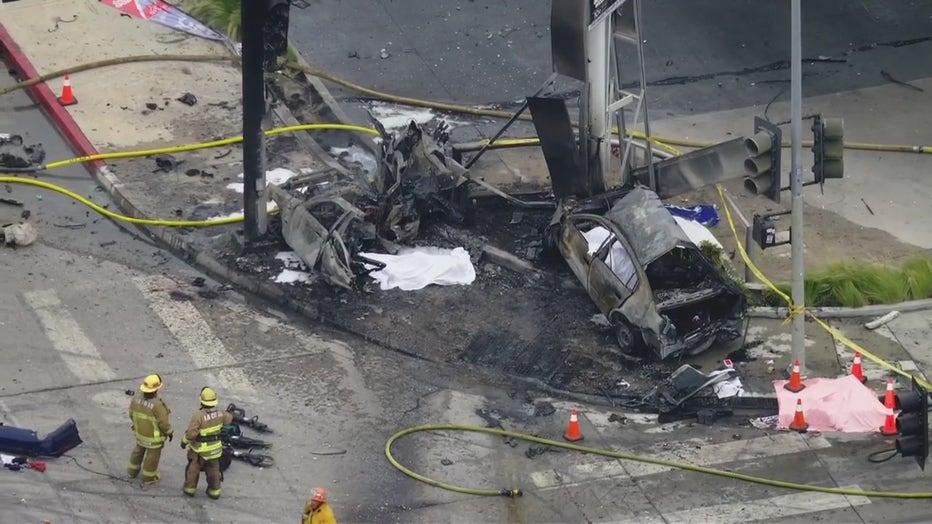 One CHP officer described the crash scene to reporters on Thursday afternoon. "It almost looks like a war zone," he said.

What we know about the victims

The pregnant woman killed in the crash was identified by the Los Angeles County coroner's office as Asherey Ryan, 23, of Los Angeles. Her unborn child, listed by the coroner's office as "baby boy Ryan," was also counted among the deceased. Family members told FOX 11 that Ryan's infant son, Alonzo Quintero, was also killed. Ryan’s family also identified Asherey’s boyfriend, 23-year-old Reynold Lester, as a victim of the crash. He worked as a security guard and was reportedly driving his family to Ryan's appointment.

As the community awaits official word on the unidentified victims, those attending the Aug. 10 memorial told FOX 11 that two friends, Nathesia Lewis and Lynette Noble, were killed in last week's crash.

Ryan, who was eight and half months pregnant was reportedly on her way to a prenatal appointment.

The California Highway Patrol reported a sixth victim was later found dead in the burned wreckage inside one of the vehicles.