The widow of an El Monte police sergeant filed a $25 million claim against LA County DA Gascón, saying the suspect who killed her husband and his partner should have been incarcerated because of his prior criminal record.

LOS ANGELES - The widow of an El Monte police sergeant announced the filing Tuesday of a $25 million claim against Los Angeles County District Attorney George Gascón and other parties stemming from the ambush death of her husband and his partner in June, maintaining that the pair's killer should have been incarcerated at the time because of his prior criminal record.

Janine Paredes was the wife of Sgt. Michael Paredes. Her claim, a possible forerunner of a lawsuit, also names as respondents the county, the Los Angeles County District Attorney's Office and the county Probation Department, alleging wrongful death and emotional distress.

"It is the D.A.'s responsibility to make sure that he is following his legal obligations and following the law," Paredes said at a downtown Los Angeles news conference announcing the claim. "And unfortunately, in this situation, and in many situations, this is not being done. The law is not being followed by our district attorney and making sure that the California Three Strike law is being put into play." 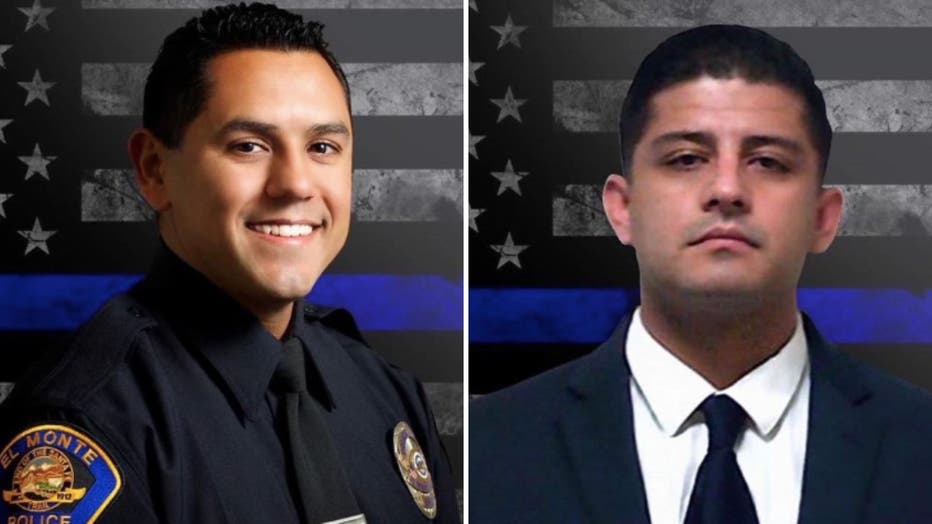 Her attorney, Michael J. Peacock, said if the district attorney and Probation Department "had both simply done their jobs ... Sgt. Paredes would be here today, as well as Officer (Joseph) Santana."

Gascón has defended his office's handling of the gunman's previous prosecution. On Tuesday, the DA's office released the following statement, "Our hearts go out to the family of Sgt. Paredes. His tragic murder is a devastating loss to both his family, friends and the community he bravely served. We have nothing but empathy for those who are suffering. We were not informed that Sgt. Paredes’s widow intended to file a lawsuit against our office. We have not reviewed the legal documents and cannot comment at this time. Again our heart goes out to the victims of this horrific tragedy."

The 42-year-old Paredes and his partner, Officer Joseph Santana, 31, were ambushed and killed by Justin Flores when responding to a call at the Siesta Inn Motel on June 14.

The claim includes a list of Flores' prior convictions, which include vehicle theft, resisting arrest and burglary.

"For reasons currently unknown and with overwhelming indifference, Justin Flores was allowed to continue his rampage of criminal violence against the unsuspecting people, including two dedicated police officers," Peacock said. "The District Attorney's Office and the county Probation Department created an opportunity for an already violent man to take the life of Michael Paredes, a beloved husband, father, friend, son and police officer. To call this a tragically negligent decision by the D.A. is an understatement."

The claim alleges that despite Flores' extensive criminal record, instead of being in custody he was instead allowed to "freely roam and prey on unsuspecting residents and workers in El Monte" because of Gascon's progressive policies.

After the shooting, critics noted that Flores, despite his record, was given a plea deal last year that allowed him to avoid prison time for being in possession of a handgun. As a result of the plea, Flores was only ordered to spend 20 days in jail and was placed on two years probation.

Thursday marked an emotional day in Southern California as friends and family said goodbye to two El Monte police officers killed in the line of duty.

A day before the fatal shootings, Flores' probation officer filed for a revocation of his probation because Flores allegedly assaulted his girlfriend the week prior, yet Flores was still not taken into custody, the claim alleges.

Flores, 35, died by suicide on the sidewalk outside the motel.

Gascón in June insisted that the 2021 plea deal with Flores was "appropriate under the circumstances."

"We had an individual who was drug addicted for many years," Gascón said. "He had been arrested multiple times for a variety of low-level offenses. (Last year's) case was a case where he stole a television when he broke into his grandparents' house and he was high at the time. He went through a lengthy period of time without any contact with the criminal justice system.

"... The reality is that when you have the history that this individual had, the outcome was appropriate under the circumstances," Gascón said.

He insisted that when people commit serious crimes, his office works "hard to ensure there are serious consequences."

He also conceded that "we have an imperfect" criminal justice system, and said it's impossible to "predict 100% of the time" what will happen with criminal defendants in the future.