LOS ANGELES - In less than a week and right before Christmas, the iconic Griffith Park Pony Rides is scheduled to shut down for good.

On Thursday morning, the public got to weigh in and have the opportunity to sound off on the closure in a virtual meeting. Officials with the City of Los Angeles Department of Recreation and Parks are open to ideas on what should replace the attraction.

"I read through the veterinary report, that did not show any abuse or neglect. So to receive an email from the mayor's office stating that the pony rides were being closed because of neglect or for animal welfare doesn't make any sense," said one veterinarian.

"People claim this is culture, this is tradition, but what we are seeing is abuse. When you find out that your culture or your history is nothing more than abuse, then it's time to modify the behaviors," said a local resident.

Griffith Park Pony Ride is located on the southeastern corner of the park near the 5 Freeway and has existed for over 70 years. City officials said they did not renew the contract due to a lack of transparency with the owner, Stephen Weeks, over four horse deaths. 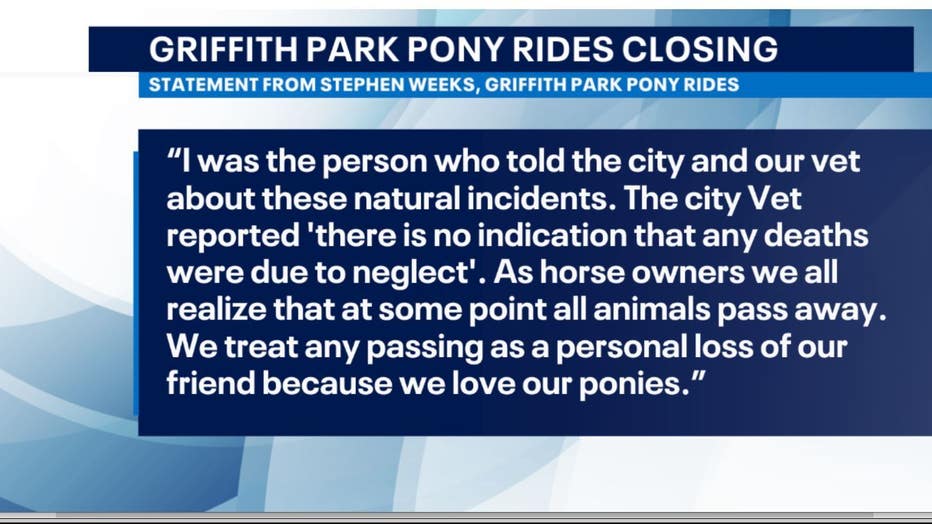 Animal rights groups have been protesting the pony rides and called for them to end.

"It’s imperative that this city convert this party to a non-animal model and stop exploiting animals at Griffith Park Pony Rides," Zohra Fahim with the LA Alliance for Animals said. "The next model needs to be a non-animal model. Something that would be safe for children."

Protesters on both sides were at the landmark over the weekend, with supporters fighting for the rides to stay open. Some supporters called the claims from animal activists "alarmist and exaggerated."

Weeks also spoke out. In a statement, he said, "I was the person who told the city and our vet about these natural incidents. The city vet reported ‘there is no indication that any deaths were due to neglect." As horse owners we all realize that at some point all animals pass away. We treat any passing as a personal loss of our friend because we love our ponies."

Griffith Park Pony Rides is set to close on Dec. 21.