Villanueva fights back against cover-up allegations

Sheriff Alex Villanueva says the LASD has launched a criminal investigation into how the media obtained a use-of-force video that showed a deputy kneeling on a handcuffed inmate's head. The LA Times is calling it an attack on the First Amendment.

LOS ANGELES - Los Angeles County Sheriff Alex Villanueva on Tuesday announced the department has launched a criminal investigation into how the media obtained a use-of-force video that showed a LASD deputy kneeling on a handcuffed inmate's head. 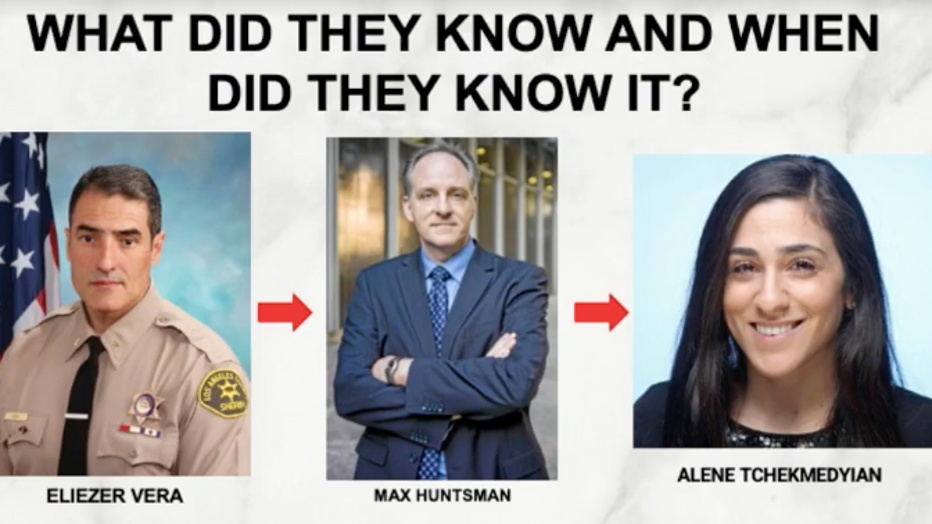 A screenshot from a presentation delivered by LA County Sheriff Alex Villanueva on April 26, 2022.

"The matter is under investigation. This is stolen property that was removed illegally by people who had some criminal intent. It'll be subject to investigation," Villanueva said, adding that other agencies will be involved in the matter.

"She [Tchekmedyian] received information, and then she put it to her own use. What she receives legally and puts to her own use and what she receives illegally or the LA Times uses… that's a huge complex part of the law… freedom of the press… however when its stolen material, at some point you actually become a part of the story… so it's up to the LA Times to decide that," he added.

Sheriff Alex Villanueva’s attack on Alene Tchekmedyian’s First Amendment rights for doing newsworthy reporting on a video that showed a deputy kneeling on a handcuffed inmate’s head is outrageous. His attempt to criminalize news reporting goes against well-established constitutional law. We will vigorously defend Tchekmedyian’s and the Los Angeles Times’ rights in any proceeding or investigation brought by authorities.

Later in his press conference, Villanueva addressed a lawsuit brought on by a "disgruntled employee" alleging he has routinely blocked or stalled investigations and covered up misconduct to avoid bad press in his re-election campaign.

"The foundation of this entire lawsuit is false. Everything in this lawsuit is false. When you take this entire thing into context, you realize that there's a lot of people working in concert and coordination. That includes the LA Times, that includes people that obviously to defeat me electorally, that includes the board-appointed inspector general, and the civilian oversight commission," Villanueva said. "A lot of people are working overtime and they're doing it as best as they can so there will be more of this nonsense thrown at me until June 7, but it is what it is."

In his lawsuit, Commander Allen Castellano claims he sent the video of the March 10, 2021 incident to Assistant Sheriff Robin Limon immediately afterward.

The man in custody, Enzo Escalante, suffered minor injuries. Deputy Douglas Johnson was holding the handcuffed Escalante down with his knee after he had punched the deputy in the face.

Villanueva went on to say the department is "more than happy to testify" regarding this lawsuit.

Castellano claims the sheriff delayed an administrative investigation into the deputy’s actions for nearly a month and prevented the department’s Internal Criminal Investigations Bureau from reviewing the incident.

"We have serious issues to handle out there. We have violent crime. We got homelessness out of control... defunding... and on top of that I have this circus entirely orchestrated for political purposes only," he added. "And too bad I don't have people, reporters, from the LA Times. Maybe you need to start clarifying exactly what you did with this, who did you get it from, and when did you get it… maybe that's a question for you to answer," Villanueva directed at the LA Times.

Los Angeles County Supervisor Hilda Solis issued a statement Tuesday saying she is calling on the state attorney general to investigate Villanueva for a "pattern of unconscionable and dangerous actions like the one today," referring to Villanueva calling a news conference with county resources to lash out at political foes.

"The latest attack on LA Times reporter Alene Tchekmedyian is another dangerous example of Sheriff Villanueva attacking the media and the First Amendment," Solis said. "This is in keeping with his past harassment of other women, including KPCC reporter Josie Huang as well as myself and other county officials.

"Displaying Alene's photo at today's press conference and making her appear as if she committed a crime is not just an attack on Alene but the entire journalistic community. What's criminal is the sheriff's cover-up of deputies using excessive force against an incarcerated person, including kneeling on his neck for three minutes. What's not criminal, however, is Alene and other journalists reporting on it."