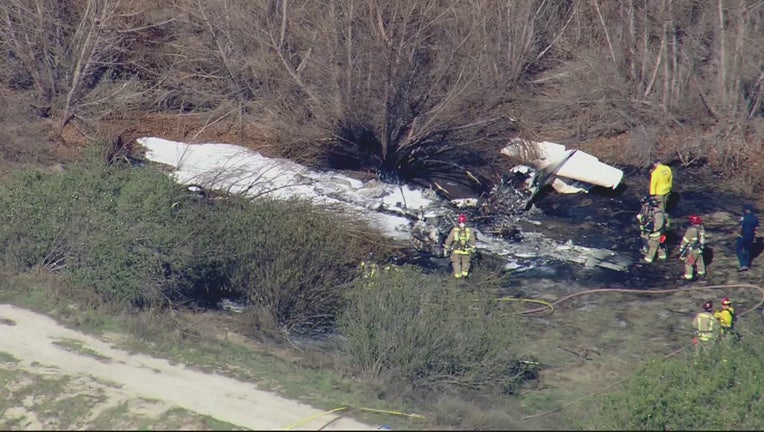 CORONA, Calif. - Coroner's officials Friday released the names of an 85-year-old Torrance resident and three other Southland residents who were killed when a single-engine airplane crashed during departure from Corona Municipal Airport.

Joseph Zingali, the owner of the Beech B-36 Bonanza, Paula Mitchell, 61, of La Mirada, and Whittier residents Daniel Rodriguez, 70, and Teresa Rodriguez, 63, died when the plane went down shortly after noon Wednesday while taking off from the non-towered airfield.

According to Federal Aviation Administration records, the four-seat Bonanza -- N36TT -- was manufactured in 1983 and had a valid airworthiness certificate.

National Transportation Safety Board investigators spent part of Thursday at the crash site, examining the burned wreckage. Officials said the plane's remnants will be hauled away to a secure location for further inspection.

The Bonanza went down as the pilot was trying to depart Runway 7, which is roughly 3,200 feet in length, with obstructions at both ends.

It was unclear who was piloting the plane. FAA records show that Zingali held a commercial pilot's license, and Daniel Rodriguez had a private pilot's certification.

Fire crews reached the site within 10 minutes and found the plane engulfed in flames, which were doused after burning about a quarter-acre of brush. No homes or other structures were in the immediate vicinity.

A Corona Fire Department spokesman said the Bonanza had been topped off with 80 gallons of gasoline, suggesting that with all four seats occupied, it may have been overloaded. The plane hit a fence after rising only a few feet from the runway surface, causing it to cartwheel onto vacant property owned by the U.S. Army Corps of Engineers.

Witnesses said the pilot appeared unable to rotate the plane as he approached the runway edge.

A preliminary NTSB report on the crash will likely be published next week.