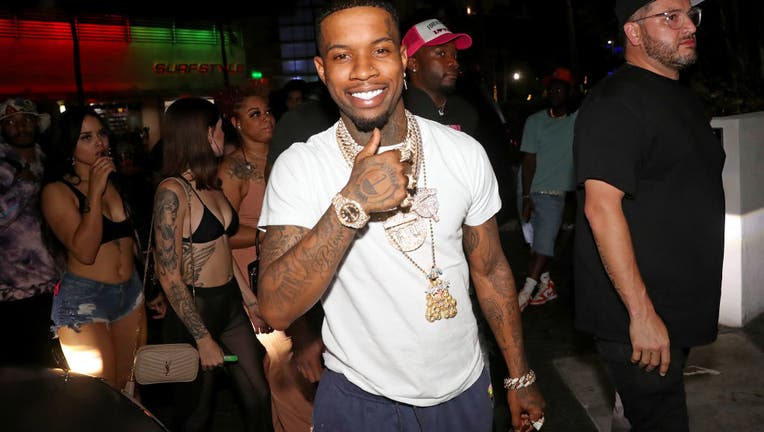 LOS ANGELES - Rapper Tory Lanez was ordered Tuesday to stand trial on felony assault and gun charges for allegedly shooting at fellow rapper Megan Thee Stallion's feet, wounding her, while they were in the Hollywood Hills in the summer of 2020.

Superior Court Judge Keith H. Borjon rejected a bid by defense attorney Shawn Holley to dismiss the case "for insufficiency of the evidence."

Lanez -- who had implied his innocence by posting on Twitter that "the truth will come to light" -- was charged in October 2020 with one count each of assault with a semiautomatic firearm and carrying a loaded, unregistered firearm in a vehicle.

The charges include allegations that the now 29-year-old Canadian rapper, whose real name is Daystar Peterson, personally used a firearm and inflicted great bodily injury.

Los Angeles Police Department Detective Ryan Stogner told the judge that he subsequently spoke with Meghan Thee Stallion and that she told him that she heard Lanez say, "Dance, bitch," before firing at her at about 4:30 a.m. July 12, 2020, as the bikini-clad woman got out of a Cadillac SUV for the second time that morning following an argument.

"No one heard, `Dance, bitch,' except for Megan?" defense attorney Shawn Holley asked on cross-examination.

The victim, identified in court and the criminal complaint only as "Megan P.," described the injuries to her feet as "bleeding profusely" and that she fell to the ground and crawled to a nearby driveway, according to the detective.

She said that a female friend of hers who had been in the vehicle ran up to her afterward, along with Lanez, and that he "emphatically apologized for what he did" and offered to drive her home.

The detective said Megan Thee Stallion told police and that Lanez "offered her money" and begged her not to say anything, telling her that he was on probation -- something Stogner said he could never substantiate. 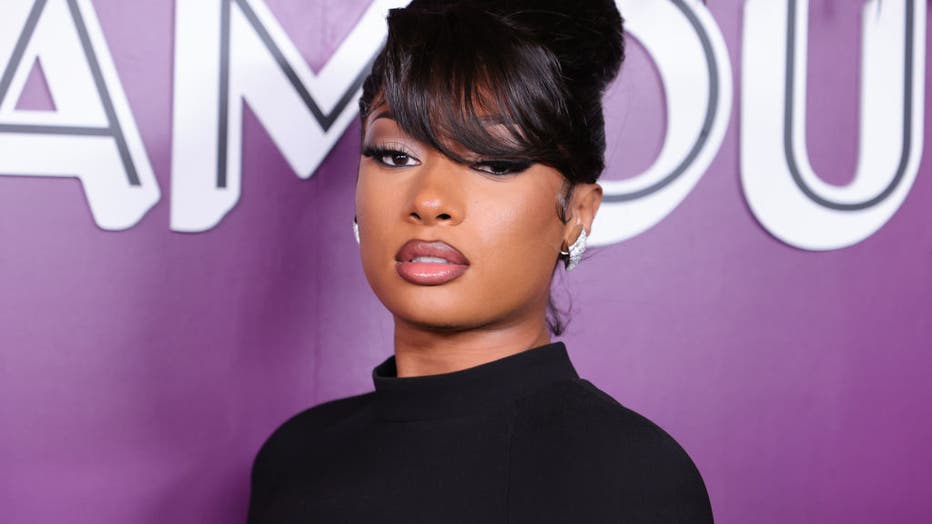 Megan Thee Stallion attends the 2021 Glamour Women of the Year Awards at the Rainbow Room at Rockefeller Center on November 08, 2021 in New York City. (Photo by Theo Wargo/Getty Images)

The vehicle was subsequently stopped by police officers responding to a call of a shooting, and she initially told officers and doctors that she had not been shot and that broken glass had caused the injuries to her feet, according to the detective.

She told the detective that she was "extremely scared and embarrassed," was "scared he was going to get in trouble" and was concerned that the police might shoot him, but was "sincere," "visibly distraught" and "crying" when she subsequently admitted that Lanez had shot her, Stogner testified.

Some of the bullet fragments were subsequently removed from the woman's feet by an orthopedic surgeon at Cedars-Sinai Medical Center, but some bullet fragments still remain inside her and she reported that she has ongoing physical therapy and difficulty walking in some types of shoes, according to the detective.

Following his arrest, Lanez made a jailhouse phone call to the victim's female friend as she waited at the hospital and "he continued to apologize for the incident that occurred" and explained that he was basically drunk, the investigating officer testified.

In an outburst from the opposite side of the courtroom, Lanez questioned aloud how the detective could tell why he was apologizing during the call.

"Does he say anything in the jail call about shooting?" defense attorney Shawn Holley asked the detective.

The injured woman, who was bleeding, and Lanez were among four people in the SUV that was stopped about a mile from the scene of where shots were reported, according to LAPD Officer Sandra Cabral.

A handgun that was "warm to the touch" was discovered inside the vehicle, and four spent casings were subsequently found at the scene, Cabral testified.

In a video posted on Instagram Live following the shooting, Megan Thee Stallion said, "Tory shot me. You shot me and you got your publicist and your people ... lying ... Stop lying."

She said police officers drove her to a hospital, where she underwent surgery, and added that she was "incredibly grateful to be alive."

The rapper, whose real name is Megan Pete, gained fame in part through freestyling videos shared widely on Instagram. Her song "Savage" went viral on TikTok and topped the Billboard Hot 100 chart in May 2020, while her provocative collaboration with Cardi B on "WAP" garnered her more attention.

Lanez released his fifth album "Daystar," using multiple tracks to address the accusations. In one song he raps, "How the f--- you get shot in your foot ... don't hit no bones or tendons?"

Lanez's songs have also focused on those lining up against him, which includes other rappers and Los Angeles Lakers guard J.R. Smith, who posted on Instagram in August 2020, "This clown shoots a female an y'all listening to his music like its ok!"

Lanez is free on bond, with arraignment set for Jan. 13 in a downtown Los Angeles courtroom.

He could face up to 22 years and eight months in state prison if convicted as charged, according to the Los Angeles County District Attorney's Office.