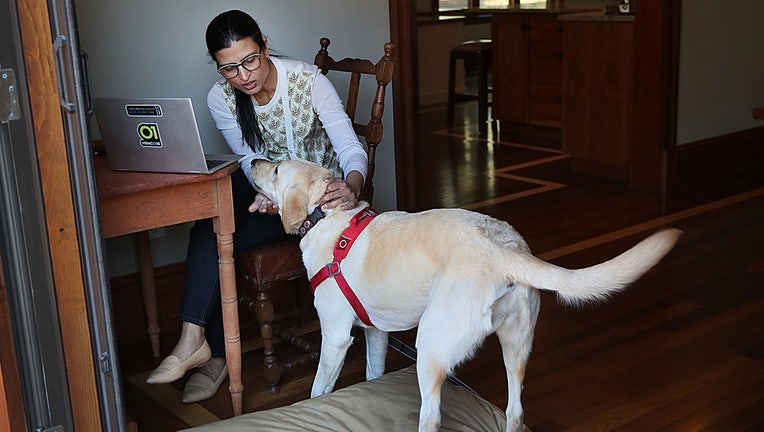 Sam King, the CEO of Veracode, a cybersecurity company, works from home in Dover, MA with a dog that likes to participate on conference calls on March 27, 2020. (Suzanne Kreiter/The Boston Globe via Getty Images)

IRVINE, Calif. - Most of the nation's workforce is doing their jobs from home during the coronavirus outbreak and a majority of them want to make it a permanent move, according to a survey released Thursday.

The online poll of 1,065 adults was prompted by a tripling of business in the past two weeks for Waveform.com, an Irvine-based company that helps boost cellphone signals, founder and CEO Sina Khanifar said.

"We kind of wanted to dig into that more and try to understand why our sales were increasing," Khanifar told City News Service. "We knew it was something to do with working from home."

Khanifar admitted he was "skeptical" about employees keeping up with production staying at home.

"But everyone's banded together, and part of it is the unusual situation, but we're doing triple the order volume than before and our customer support system is handling it," Khanifar said.

His company has one major project at a military hospital in Nevada, "and they need coverage like yesterday," but most of what his company is handling is helping with dropped calls and internet connectivity with employees working from home, Khanifar said.

Khanifar estimates that 85 million people are working from home.

"That's such a huge, monumental shift to remote work unlike anything we've ever seen in the U.S.," Khanifar said. "And I expect the number to go up."

The survey by the polling firm SurveyMonkey showed that 60.4% liked working at home and 48.9% hoped they could keep doing it.

"One of the things that surprised us is quite a number of people are enjoying it," he said.

The survey also showed that 33.8% felt they were getting less work done, but 25% said they were accomplishing more.

The survey showed 15.5% reported issues with connecting with the internet daily, and 12.5% said they bad or very poor cell signal reception at home.

Sometimes it's owed to working in a rural or exurban area, or because a customer works in a high-traffic cellphone area.

"If you're between two cell towers the phone gets confused," Khanifar said.

Half of the respondents were disinfecting their cellphones, and 37.7% said they never or rarely clean their cell phones.