A new shelter is opening in Los Angeles to provide housing for families. Laura Diaz spoke to one woman who will soon move in, after spending years on the streets.

LOS ANGELES - On Thursday, April 14, there will be a ribbon-cutting ceremony for "Angeles House."

On Monday, FOX 11 spent time with a single mom, 35-year-old Alma, currently living at the Union Rescue Mission in downtown LA. Prior to moving there, she told us she had been homeless on and off for the last five years.

She spent time in Watts and Los Angeles, living unhoused. Alma described in vivid detail the tough existence on the streets and sleeping on cardboard. Sometimes she had to rummage through dumpsters to eat food tossed into the garbage in order to survive. Multiple times, her family tried unsuccessfully to find her.

Alma told us an addiction to meth put her on a perilous course. But once she found out she was pregnant, she stopped doing drugs immediately.

Even so, she continued to live on the streets until she was eight months pregnant. 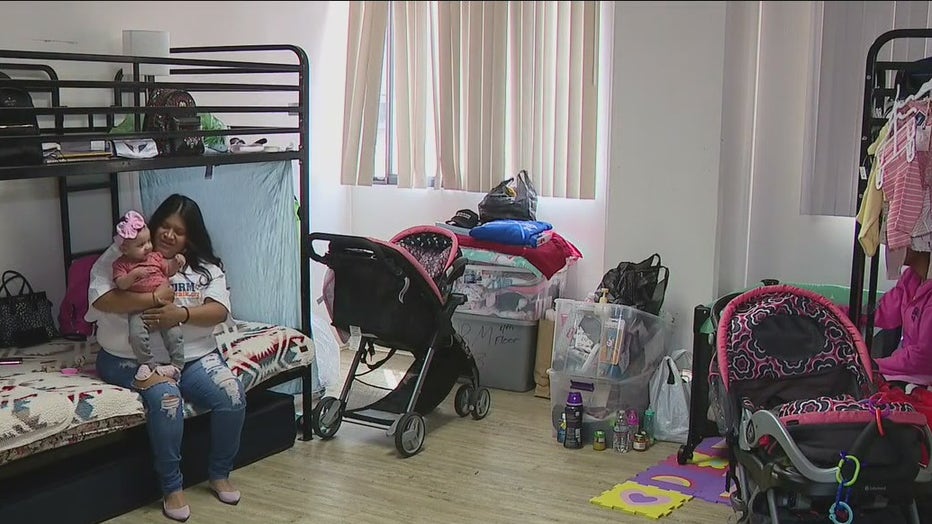 A new shelter is opening in Los Angeles to provide housing for families. Laura Diaz spoke to one woman who will soon move in, after spending years on the streets. (FOX 11)

Finally, she knew she needed shelter — and found it at Union Rescue Mission. She’s been there for months, secure in safe surroundings.

But now, more opportunities for Alma. Alma and her precious baby daughter, Adrienne, will move into the new South LA facility on Thursday. They will have their own living space. It can house up to 80 families. Alma is 1 of 40 families moving in this first week.

With her healthy baby girl in her arms, she showed us the Skid Row sidewalk where she spent her last night on the LA streets. She urged others not to give up hope.

"Someone will always help if you ask," Alma said.

We will be there on Thursday to chronicle the newest chapter of Alma’s journey.