PASADENA, Calif. - Thousands of spectators lined Colorado Boulevard and other Pasadena streets Monday to witness the 134th Rose Parade, featuring the annual array of floral-colored floats, musical performances by marching bands from across the country and a host of equestrians.

RELATED: Rose Parade 2023: What you need to know before you go

The parade began at 8 a.m., opening with a performance by Fitz and The Tantrums aboard the Honda float "Forever Determined." The parade will then make its way along its traditional 5 1/2-mile route, moving east along Colorado Boulevard to northbound Sierra Madre Boulevard, ending at Villa Street.

This year's parade theme is "Turning the Corner," with Tournament of Roses President Amy Wainscott saying it is meant to celebrate the potential of every new year and rising above challenges.

"Whether that corner is actual or figurative like the unlimited potential that each new year brings -- we all enjoy the opportunity of a fresh start," Wainscott said in a statement. "Turning a corner means rising above -- alone, or with family, friends and community. This year, as we turn the corner together, we share in the hope, beauty and joy of what 2023 will bring."

Countdown to the Rose Parade

The theme of the 134th Rose Parade is "Turning the Corner," with former Arizona Rep. Gabby Giffords serving as grand marshal. The parade will begin at 8 a.m. Monday, opening with a performance by Fitz and The Tantrums aboard the Honda float "Forever Determined."

Leading the parade will be grand marshal Gabby Giffords, the former Arizona congresswoman who was shot in the head during an assassination attempt in January 2011 and has become an outspoken gun-control advocate.

Discussing how her experience matches the parade theme of "Turning the Corner," Giffords said in October, "Our lives can change so quickly. Mine did when I was shot. But I never gave up hope. I chose to make a new start, to move ahead, to not look back."

Wainscott hailed Giffords as a "trailblazer," noting that she was the youngest woman ever elected to the Arizona state Senate before moving onto Congress. 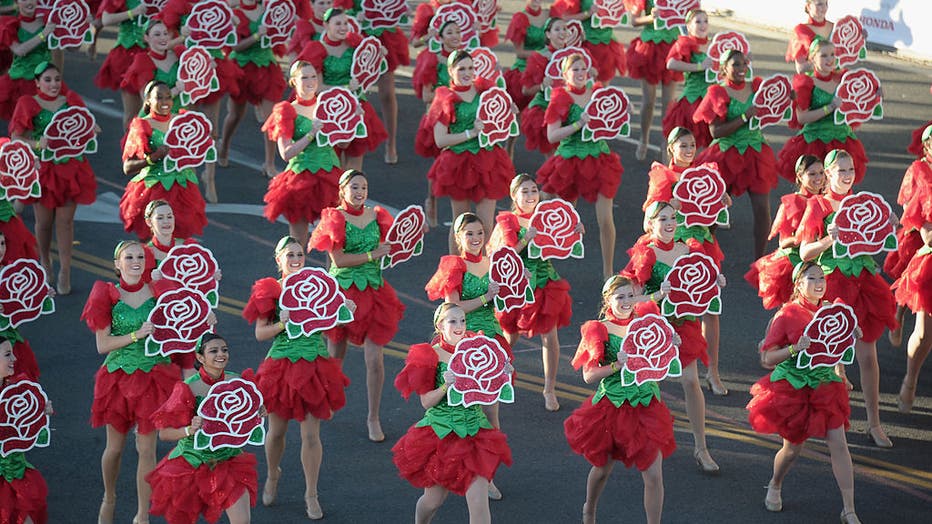 "She was re-elected to a second term beginning in 2011, but her tenure was cut tragically short," Wainscott said, referring to the shooting that occurred during a community event near Tucson that nearly killed her. Giffords survived the shooting, but she had to re-learn how to walk and speak.

"What followed was an arduous journey of recovery that included physical, occupational and speech therapy," Wainscott said.

Giffords was able to return to the House of Representatives later that year, but she submitted her resignation in January of 2012, one day after attending President Barack Obama's State of the Union Address.

In an annual tradition, the parade will also be overseen by the seven-member Royal Court, made up of Pasadena-area high school girls chosen for their public speaking, academic achievement, youth leadership and community involvement.

The court, which has already taken part in dozens of community events leading up to the parade, is led by 104th Rose Queen Bella Ballard, an Altadena resident and senior at The Ogburn School. Rounding out the Royal Court are:

-- Adrian Crick, an Altadena resident and senior at Sequoyah School;

-- Zoe Denoncourt, a Pasadena resident and senior at Marshall Fundamental;

-- Sahanna Rajinikanthan, an Arcadia resident and senior at Arcadia High School; and

More than 20 marching bands are scheduled to march and perform during the parade, hailing from as far away as China, Panama, Italy and Japan, and also featuring the bands of the two universities participating in the Rose Bowl Game -- Utah and Penn State.

But the highlight of the parade by far is the procession of ornate floats, all of which must be completely covered by flowers or other natural materials, such as leaves, seeds or bark. The floats are meticulously crafted over several months, beginning with the understructure and concluding with the arduous task of applying the flowers and other materials, generally one piece at a time.

A total of 39 floats are set to take part in this year's procession. Some of them are sponsored by local cities, such as Torrance, Burbank and Alhambra -- each touting local attractions, while others are funded by businesses such as Kaiser Permanente, American Honda, Trader Joe's and Snapchat.

Cal Poly Universities will present its annual student-designed and built float. And for the 20th year, the Donate Life float will celebrate the impact of organ donors. This year's Donate Life float will feature a Chinese street dragon -- a symbol of power, good fortune and strength. The float will again feature dozens of "floragraphs," or floral photographs, of those who have given the gift of life through organ donation. Several living donors will also be riding aboard the float.

Following the parade, the floats will go on display at the Floatfest at Sierra Madre and Washington boulevard, giving spectators a chance to a get a close-up look at the creations. The Floatfest will be open from 1 to 5 p.m. Monday.

On Tuesday, the Floatfest will be open at 7 a.m. for senior citizens and the disabled, then open to the general public at 9 a.m.