Protest for representation in LA's District 10

"We're demanding due process, we're demanding a seat at the table to really discuss many of the issues of transparency, civil rights being violated," Rev. K.W. Tulloss, president of Baptist Minister's Conference Los Angeles said.

LOS ANGELES - A group of Council District 10 residents and faith leaders protested outside Los Angeles City Hall Friday to call for the reinstatement of Councilman Mark Ridley-Thomas, who was suspended following his indictment in a federal corruption case.

The group of about 20 people held a large sign reading "you stole our vote!!!" outside a parking garage on the Main Street side of City Hall. They also chanted "You stole our vote" as people drove into the garage. 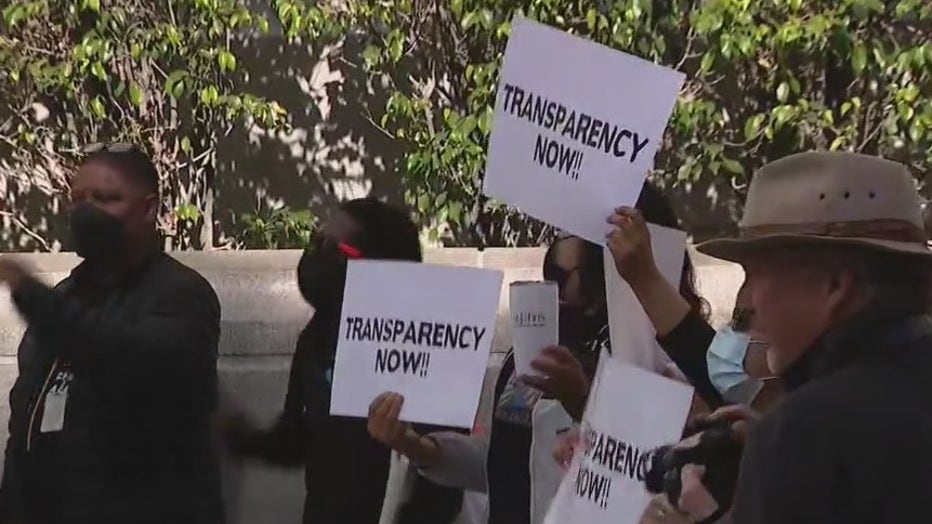 Rev. K.W. Tulloss, president of Baptist Minister's Conference Los Angeles, told City News Service the group is protesting to get Ridley-Thomas reinstated and to show opposition to the process being run "behind the scenes."

"We're demanding due process, we're demanding a seat at the table to really discuss many of the issues of transparency, civil rights being violated," Tulloss said.

"We want Mark Ridley-Thomas to be reinstated. He is who the people has placed in office."

On Feb. 22, the Los Angeles City Council unanimously appointed former District 10 Councilman Herb Wesson to temporarily represent the district, either until Dec. 31 2022 or until Ridley-Thomas is acquitted or the charges are dropped.

Residents of Councilman Mark Ridley-Thomas’ district are not happy with the way the city council is handling his suspension. The council voted to appoint Herb Wesson to represent the district until the end of the year.

Wesson represented the 10th District from 2005 to December 2020. He also served as the president of the council from 2012 to 2020. The lawsuit notes that Wesson is "termed out" and alleges he cannot lawfully assume the council seat because he already represented the district for three terms.

Ridley-Thomas, who was the executive director of the SCLC's Greater Los Angeles chapter from 1981-1991, was suspended from the council in October following the federal indictment, which stemmed from alleged actions while he was serving on the county Board of Supervisors.

``The residents of the 10th Council District want and deserve a voting voice, and they overwhelmingly wanted Herb Wesson. From that, this council unanimously voted to appoint Mr. Wesson," Council President Nury Martinez said in a statement after the appointment was blocked. ``This entire situation over the past four months isn't fair to Council District 10 residents. In fact, they are in this situation through no fault of their own. It is my intention to ensure this district has a voting member. I stand by giving the residents a vote and a voice on the City Council. At this time, we are in discussions with the city attorney and we will determine our legal options."

Since Ridley-Thomas' suspension, the 10th District has been overseen by caretaker Karly Katona, who does not have voting authority. The council's vote to suspend Ridley-Thomas passed with three council members in opposition: Councilmen Marqueece Harris-Dawson, Bonin and Curren Price. Price said before the vote that his office had been inundated with calls of support for Ridley- Thomas from South L.A. residents.