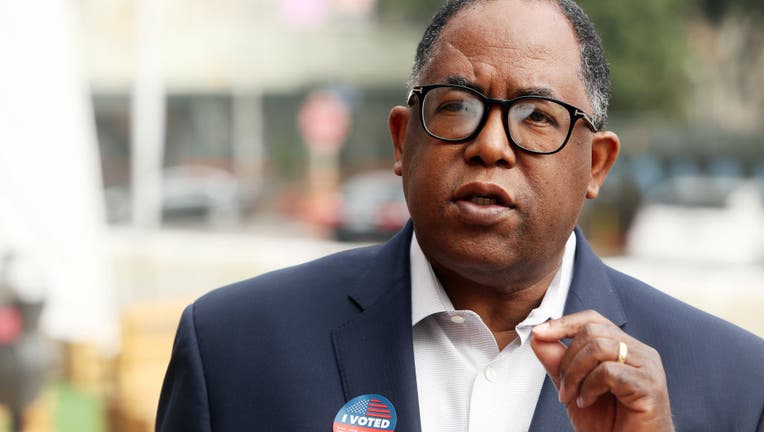 LOS ANGELES - The Los Angeles County Board of Supervisors marked the end of an era on Tuesday, as Mark Ridley-Thomas attended his last meeting before moving to his new seat on the Los Angeles City Council.

The board voted to name an entrance plaza at the new Commons Project at the Natural History Museum, which sits in the 2nd District Ridley-Thomas represents, in his name.

Supervisor Kathryn Barger told Ridley-Thomas the naming marked "the immeasurable contributions that you've made to arts and culture in your district and really throughout the entire county."

A video highlighting the supervisor's accomplishments began with the voice of former President Barack Obama saying, "Don't give up on activism. There are too many needs to be met and too much work to be done," over an image of a memorial dedicated to Martin Luther King Jr. at a site overlooking the county from Baldwin Hills.

West was seen offering his endorsement during an earlier race, calling Ridley-Thomas "committed to unconditional truth and unconditional love, and politics is just the vehicle for it. That's the kind of statesperson we need."

The video touched on his fight to rebuild a first-class community hospital after Martin Luther King Jr./Drew Medical Center was shut down.

RELATED: LA County will have an all-female Board of Supervisors for the first time in history

"Today, we are renewing our commitment to this community to rebuild like never before," Ridley-Thomas can be heard saying.

Others talked about his battle against homelessness and success in championing Measure H, his push for the Crenshaw Line and his commitment to ending systemic racism.

"We have our superhero, our superman and supervisor: Mark Ridley-Thomas, who always does what he says he's going to do," Johnson said.

After the video, Barger also sang his praises.

"You are truly leaving a remarkable legacy in the Second District and across the entire region, which will have a ripple effect for generations to come," she said, before detailing his greatest achievements.

She noted that focusing on the problem of homelessness and mental health was central to his legacy and also called out his work to establish the Civilian Oversight Commission and the way that effort has influenced other jurisdictions.

But is what is most astounding is that you have been a champion for those in need," Barger said.

Supervisor Hilda Solis told him, "You can get things done for your constituents. Whether it's the Park to Playa (regional trail) project or the MLK Medical Campus, your mark on our county is permanent, and we will always remember and be grateful for your service."

Supervisor Sheila Kuehl recalled serving with Ridley-Thomas in the state Legislature before launching into an appreciation.

"You have validated my longstanding belief that one person can make a difference," Kuehl said, saying Ridley-Thomas' most meaningful impact maybe in championing reforms that sometimes takes generations to change.

Supervisor Janice Hahn recalled her penchant for exchanging passages of scripture with Ridley-Thomas, calling him Brother Redemption, and admitted being skeptical about getting Measure H passed.

"I wasn't sure that L.A. County voters would want to spend their own money on this problem (homelessness)," Hahn said.

"You ... convinced the voters that yes, this was everybody's problem and that homeless was intolerable."

Though the supervisor has spent his life in public service and left plenty of other powerful posts behind, he choked up Tuesday after his colleagues' remarks.

"All of this is a lot to stand up to ... I guess it goes without saying that I am humbled and honored to be acknowledged in such a lasting way," Ridley-Thomas said.

He quoted Martin Luther King Jr., saying that, "Life's most persistent and urgent question is what are you doing for others," and said his career in public service has been as fulfilling as he could have imagined.   Ridley-Thomas gave a nod to what will be an all-female board come December, when Sen. Holly Mitchell takes his seat, recalling a quip from former British Prime Minister Margaret Thatcher.

The Commons Project that will bear his name is intended to be a community hub with an immersive theater for science, education and community projects including films, lectures and satellite-transmitted scientific expeditions from around the world, and a variety of community gatherings.

A glass facade will showcase museum specimens and other imagery.

The entrance plaza is designed to serve as a "front porch" of the community commons where residents will meet up to enjoy programs and events.