The DA’s report found that Ventura County Sheriff’s Sergeant Ronald Helus and California Highway Patrol Officer Todd Barrett acted reasonably, and their use of deadly force in self-defense and in the defense of others was justified.

The DA’s office has released new security video of the shooting that was part of an extensive investigation.

On the night of Nov. 7, 2018 two California Highway Patrol officers made their way to the Borderline Bar & Grill after receiving calls of shots fired from inside. They arrived on scene followed by Sgt. Helus.

Outdoor security cameras captured the three officers approaching the door of the restaurant. Officials say the shooter was inside the office watching them from monitors with a nine camera view. 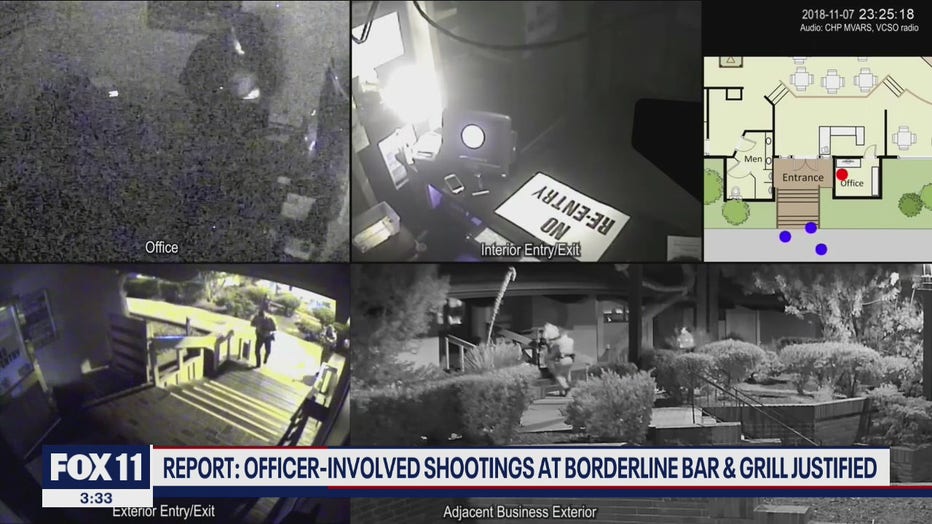 As the officers entered Borderline they saw victims and Sgt. Helus called for ambulances.

The shooter, Ian David Long, is seen from one camera leaning over the counter to shoot at officers... not once but twice.

On another camera he’s captured lighting a smoke grenade that was thrown into the club. It was one of several he used to obscure people’s vision.

Sgt. Helus was taken to the hospital where he was pronounced dead.

When officers made entry for a second time they discovered that Long had committed suicide. According to the DA’s report, Long fired 61 rounds during the course of the entire incident and had 129 rounds remaining when he died.