LA residents angered over racial comments made by council members

Protests erupted in Los Angeles following comments made by three members of the city council.

In true LA fashion, a Mariachi band was among the crowd playing music as their fellow Angelenos gathered inside and outside City Hall. 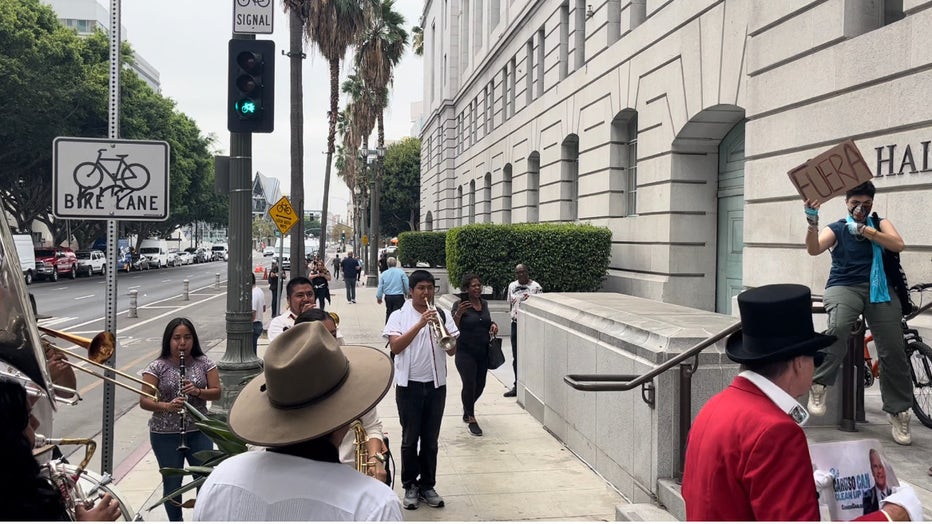 Community members are demanding that Martinez resign immediately and no longer feel she represents the people of Los Angeles. Prior to the scheduled city council meeting, one group chanted in Spanish "Out, out, out! She needs to resign!"

Demonstrators call for the resignation of Nury Martinez

After multiple attempts to start the meeting as scheduled, Councilman Kevin de León was seen leaving the council chambers. In addition, acting council president Mitch O’Farrell made several attempts to calm the crowd, saying "We are going to have a meeting today."

Crowd screams 'no' as councilmen Mitch O'Farrell attempts to speak

"I’m outraged that we’ve been operating with these people making decisions," South LA resident James Harris told FOX 11's Mario Ramirez."I thought we moved past this and this keeps coming and keeps coming and we’ve got to figure out how to cut the head off. They’ve got to go."

Councilmember Mike Bonin, often on the other side of the controversy, addressed the crowd and was met with cheers and applause in solidarity.

Bonin was unapologetic in his emotional and powerful speech, making it clear that his family comes first. 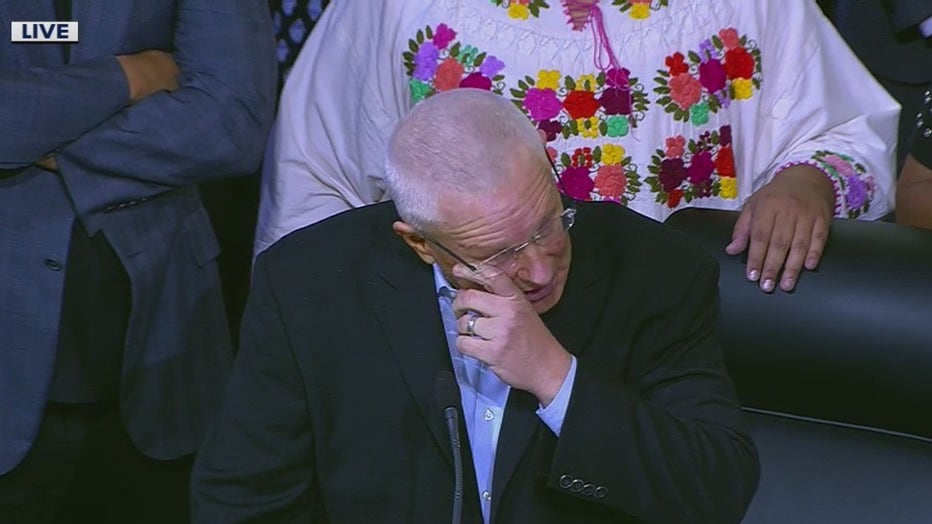 "I really don’t want to be here. I want to be with my family. I am still trying to wrap my head around everything that was said and everything that is happening. My husband and I are both raw, heartbroken, angry and sick for our family and for Los Angeles. As an Angeleno, I am reeling from the revelations of what these people said. Trusted servants who expressed hate," Bonin said when addressing the crowd.

His message to Martinez was, "First you must resign, then ask for forgiveness."

Bonin went on to say, "Let me be clear, people should not ask me for forgiveness. I can't forgive them because it's not my prerogative, it’s the prerogative of a guy who’s too young to understand."

Bonin thanked Councilmember Marqueece Harris-Dawson, LA mayoral candidate and Congresswoman Karen Bass, Melina Abdullah, who co-founded the Los Angeles chapter of Black Lives Matter, and others for reaching out and sharing concern and compassion for his son.

After several failed attempts to resume the council meeting, O'Farrell called for a recess.

FOX 11's Elex Michaelson learned Tuesday afternoon that an election for the next LA City Council president will be held on Oct. 18.

The remarks were made during a talk with Councilmembers Gil Cedillo and Kevin de León and L.A. County Federation of Labor President Ron Herrera, in a conversation that focused on the politically sensitive process of redrawing council district boundaries. Their talk also touched on the efforts to replace Councilman Mark Ridley-Thomas, who's been indicted on federal corruption charges.

It remains unknown who recorded and leaked the conversation, which appeared on Reddit but was later removed from the site.

In response to the community's outrage, Martinez resigned as the council's president but planned to keep her position as a council member. On Tuesday, Martinez announced she is taking a leave of absence in order to "take some time to have an honest and heartfelt conversation with my family, my constituents, and community leaders," she said in a statement.

Martinez, 49, has served on the council since 2013 and represents the Sixth District in the San Fernando Valley. She is the second Latina to serve on the council and was its only female member when she was elected. Six years later, she became the first Latina to become president of the City Council when she was elected in 2019, replacing long-time President Herb Wesson.