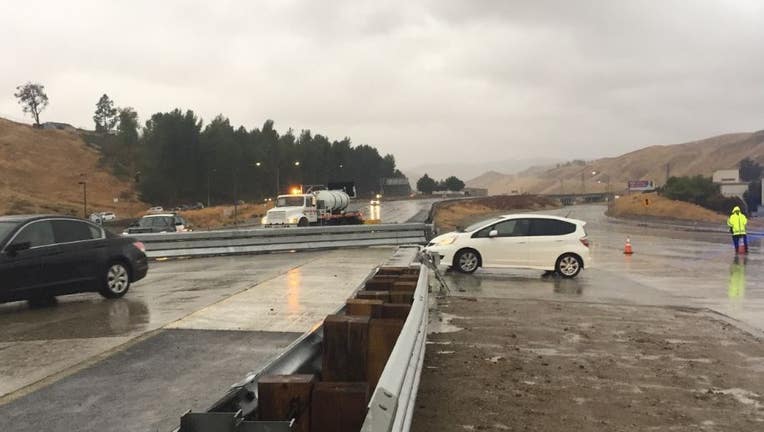 CASTAIC, Calif. - A winter storm brought rain and snow on Interstate 5 -- prompting the closure of the Grapevine in both directions Thursday morning.

But thanks to a new tool the closure didn’t cause major traffic. Caltrans installed a new gate  on the northbound lanes to help traffic congestion in times like these.

The heavily reinforced steel swinging gate was installed in the center media in unincorporated Castaic, allowing drivers to turn around back from the northbound Golden State (5) Freeway onto the southbound direction.

Its first day of operation was on Thanksgiving, Caltrans spokesman Eric Menjivar said.

The Grapevine was shut down at approximately 4:30 a.m. and soon after that the gate was employed, Menjivar said.

"It takes just a few minutes to open,'' he said. "Even big rig trucks get through. It's (the gate) such a great tool.''

The gate is on the northbound Golden State (5) Freeway, just after the Lake Hughes Road exit. The gate is 52-feet long and weighs five tons, yet crews can safely roll it open manually without electricity in less than two minutes, according to Caltrans Public Information Officer Michael Comeaux.

"To ensure that cars and truck can make the turn in wet conditions, concrete pavement was constructed in the media and the shoulder of the freeway,'' Comeaux said. "It's the first gate of this type installed in Los Angeles County by Caltrans.''

There was no word on when the road would reopen.