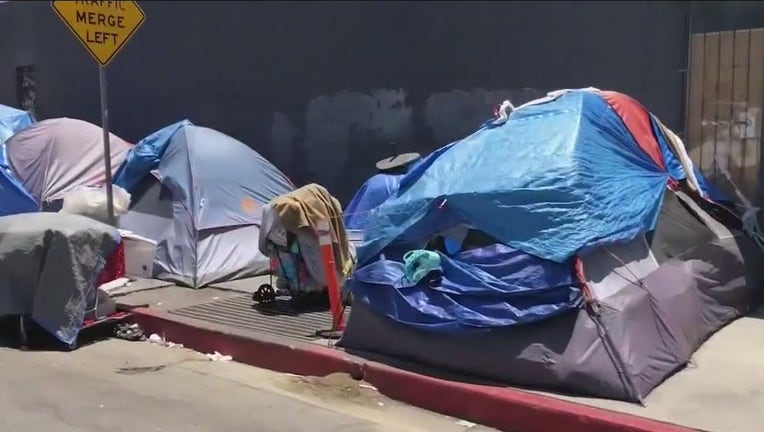 LOS ANGELES - Los Angeles' new sweeping ordinance to restrict sleeping and homeless encampments in certain areas of the city went into effect Friday, but only accessibility obstructions will be enforced until the city approves its accompanying Street Engagement Strategy.

The law was approved by the City Council and signed by Mayor Eric Garcetti at the end of July. It modifies the city's current anti-camping law in Municipal Code 41.18 to prohibit sitting, sleeping, lying, storing personal property or otherwise obstructing the public right-of-way in several areas of the city, including within two feet of any fire hydrant or fire plug; within five feet of any operational or utilizable entrance or exit; within 10 feet of a loading dock or driveway; in a manner that interferes with any activity for which the city has issued a permit or restricts accessible passage as required by the Americans with Disabilities Act; or anywhere within a street, including bike paths.

It will also protect the public right of way within 500 feet of a "sensitive" facility including schools, day care facilities, parks and libraries, once the council passes a resolution to designate a specific area for enforcement, posts signage and gives notice of the date that the ordinance will be enforced for the area.

Los Angeles' new sweeping ordinance to restrict sleeping and homeless encampments in certain areas of the city went into effect Friday, but only accessibility obstructions will be enforced until the city approves its accompanying Street Engagement Strategy.

The ordinance will also allow the city to prevent encampments for a period of no longer than one year in areas that are deemed an ongoing threat to public health or safety, including due to:

In a jointly issued statement Friday, Mayor Eric Garcetti, Council President Nury Martinez and the Los Angeles Police Department said that other than accessibility obstructions, including those that violate the Americans with Disability Act, the ordinance will not be enforced until the City Council enacts a Street Engagement Strategy to connect people to services and housing.

The City Council's Homelessness and Poverty Committee and its Energy Climate Change, Environmental Justice and River Committee advanced a motion to approve recommendations for a Street Engagement Strategy to accompany the ordinance. The full City Council has not yet voted on the motion.

The State of California is considering paying doctors to provide Street Medicine to the homeless. (August 11, 2021)

"We will only be able to provide the housing and services that are needed if trusted and skilled outreach workers are able to effectively engage -- and this strategy is the roadmap to do it, and do it well. The full City Council should act swiftly to adopt the Street Engagement Strategy, as time is of the essence," Councilman Mark Ridley Thomas, who chairs the Homelessness and Poverty Committee, said Thursday.

The strategy would include emergency outreach, service-focused outreach and sanitation outreach. Each council district would have its own Homeless Engagement Team to deploy as needed, according to a report by the Chief Legislative Analyst, which built on the City Administrative Office's work developing the strategy.

Before the vote, Bonin cited the Los Angeles Homeless Services Authority's statistic that the city only has shelter beds for 39% of the unhoused population.