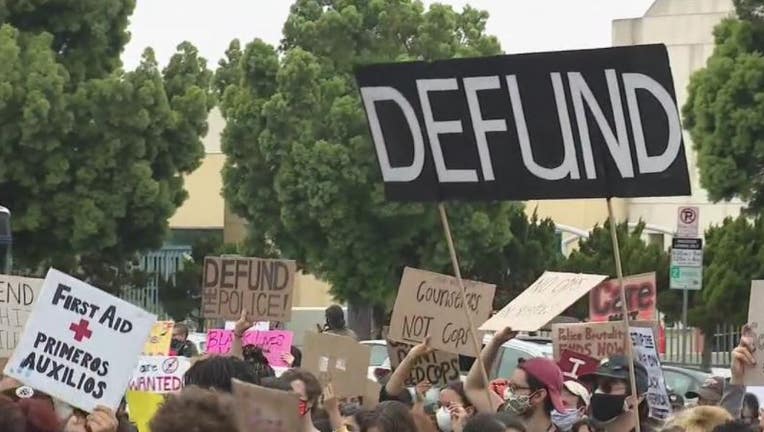 LOS ANGELES - Earlier this year, the city council diverted money out of the LAPD to go towards community projects after various protests called for defunding the police.

However, Los Angeles Mayor Eric Garcetti isn’t agreeing and gave a rare veto to those proposals, saying the money could be better spent to address social justice issues.

It was about seven months ago when hundreds of thousands of people took to the streets, chanting "Defund the Police".

That led to the LA City Council approving a cut of $150 million from the LAPD budget to be reinvested in the community. There was a plan to take $88 million and funnel it into traditional city projects in poorer communities and communities of color. They talked about services like fixing sidewalks and beautifying parks. There were also crime intervention programs.

"In the midnight hour the mayor vetoed this motion sending it back with hope that he would have more of a say in how these dollars are being spent," said City Councilman Joe Buscaino.

Some council members say the mayor had plenty of time to do that and didn’t.

Council President Nury Martinez in a statement said: "I am shocked by the mayor’s veto on a package of long overdue community driven investments for disenfranchised neighborhoods that came after months of discussions with city leaders and community members."

The mayor has said that he wants the council to come back with something more revolutionary. He’s suggesting programs more focused on addressing racial justice and income inequality, avoiding layoffs and so forth.

Especially, the notion that the mayor wants something more lofty than just traditional city services.

Councilman Joe Buscaino has the same concern he’s always had…police need funding. "I’m hopeful that my colleagues agree with me that we should not take money away from LAPD at a time of a recession where we’re experiencing 30 to 40% increase in homicides in our city," Buscaino stated.

The December 9th vote by the council was 13-2. If there is a move among council members to override the mayors veto that would take 10 votes. The council returns to business January 12th where this issue awaits them.