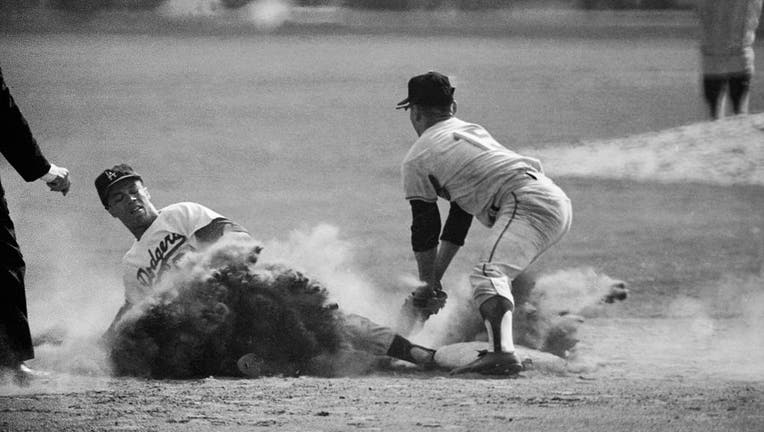 (Original Caption) Speedy Maury Wills of the Los Angeles Dodgers, is shown in this exciting baseball action, stealing his 104th base of the 1962 season, the all-time high mark for stolen bases for the season. The former major league record was held b

LOS ANGELES - Maury Wills has been inducted into the Legends of Dodger Baseball and honored for being the franchise's career stolen base leader and 1962 National League MVP.

Wills was not able to attend the ceremony preceding Saturday's game against the Cincinnati Reds at Dodger Stadium. He provided the Los Angeles Times with the text of the speech he would have given, which included "for as far back as I can remember, I wanted to be a baseball player" and "from the age of 14, when my hero, Jackie Robinson, became a Dodger, I wanted to be a Dodger."

The speech also included expressions of gratitude to many people, including former Dodgers public relations director and general manger Fred Claire and especially the late Dodger pitcher and director of community affairs Don Newcombe "who saved my life by getting me into a rehab program."

"I wouldn't be here today if my friends, with the help of God, and some wonderful organizations that want to remain anonymous, hadn't literally saved my life," the speech said. "Please, if you know someone with a substance abuse problem, help them save their lives too."

Wills, now 89, signed with the Brooklyn Dodgers in 1951, but with future Hall of Famer Pee Wee Reese ensconced at shortstop through the 1956 season, didn't reach the majors until 1959. While Don Zimmer was the Dodgers' starting shortstop for most of the season, Wills was the starter for all six games of the 1959 World Series, which the Dodgers won over the Chicago White Sox.

Wills was also the starting shortstop on the Dodgers' 1963 and 1965 World Series-winning teams.

In his first full season in the majors, 1960, Wills led the National League with 50 stolen bases. He also led the league in stolen bases each of the next five seasons, including a then-record 104 in 1962 and 94 in 1965, then the third-highest 20th century single-season total.

Wills left the team during its tour of Japan following the 1966 season, drawing criticism from owner Walter O'Malley and was traded to the Pittsburgh Pirates.

After playing two seasons with the Pirates, Wills was selected by the Montreal Expos in the 1968 expansion draft. He was reacquired by the Dodgers during the 1969 season, playing for them through 1972, his final season in baseball.

In an era when light-hitting Dodger teams were heavily reliant on stealing bases, Wills' daring on the basepaths electrified Dodger fans, whose shouts of "Go Maury Go" regularly filled Dodger Stadium. His 490 steals are the most in team history. Wills is 10th in franchise history with 1,732 hits, 876 runs and 6,156 at-bats.

Following his playing career, Wills was an analyst on NBC's "Game of the Week" telecasts from 1973-77, managed the Seattle Mariners in parts of the 1980 and 1981 seasons, then was a longtime base-running and bunting coach for the Dodgers' major and minor league players.

The Legends of Dodger Baseball was established in 2018 to recognize Dodger greats and their impact on the franchise, both on and off the field. Inductees receive a plaque honoring their Dodger achievements, which will be on permanent display at Dodger Stadium.

Wills is the fourth Legend inductee following Don Newcombe, Steve Garvey and Fernando Valenzuela, who were all inducted in 2019.