The longtime Dodgers announcer was honored Tuesday with an annual distinction that recognizes a living individual "who has made significant contributions to the national game."

The 94-year-old Scully retired after the 2016 season, ending a 67-year broadcasting career that stretched back to when the Dodgers played in Brooklyn before moving to Los Angeles in the late 1950s. It was easily the longest tenure of any announcer with one team. 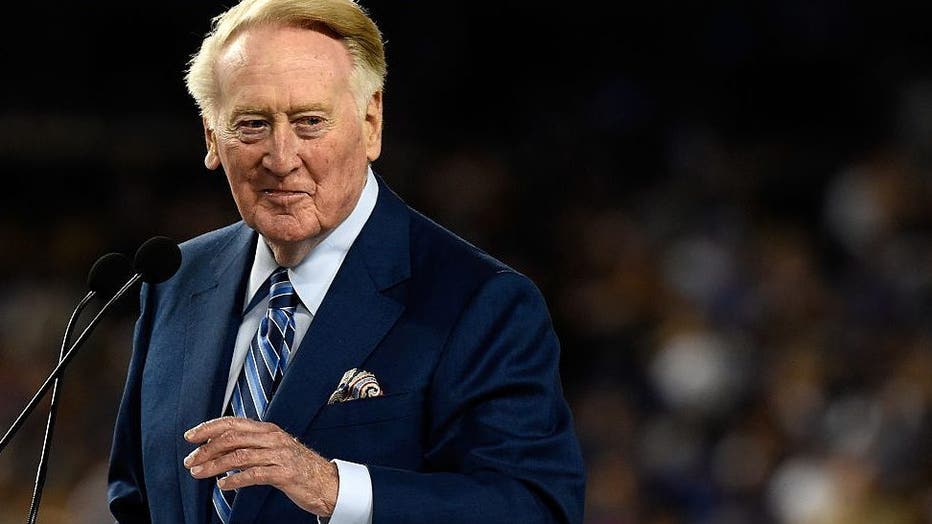 Dodgers announcer Vin Scully addresses the crowd during a retirement ceremony in his honor before the game at Dodger Stadium on September 23, 2016 in Los Angeles, California. Scully is retiring after 67 years with the Dodgers. (Photo by Lisa Blumenfe

He was one of six finalists last year, when Willie Mays won the inaugural award. This year, a 17-member panel chose from a list of candidates that included Bobby Cox, Sandy Koufax, Rachel Robinson, Bud Selig and Joe Torre, among others.

"Any award that’s already been won by Willie Mays, who certainly was one of my favorite players and one for whom I had great respect, is an honor," Scully said in a news release. "It’s an honor to even have my name linked with his in some way. I was honored, delighted and surprised that I turned out to be the second winner of Baseball Digest’s Lifetime Achievement Award. I’m proud of it and humble at the same time."

Scully won the National Baseball Hall of Fame’s Ford C. Frick Award for broadcasting excellence in 1982 and received the Presidential Medal of Freedom in 2016.

"Vin Scully was not only the voice of the Dodgers, but was also the soundtrack of our national game for an incredible seven decades," Baseball Digest publisher David Fagley said. "We are honored to recognize his iconic career both as a broadcaster and as a wonderful ambassador for the sport he loves so much."