LOS ANGELES - Law enforcement officials urged the public on Tuesday to be on alert and report any suspicious activity ahead of Inauguration Day.

Tensions have risen across the nation in the wake of the attack on the US Capitol by Trump supporters on January 6 and officials say they know Angelenos may be feeling on edge.

They also stressed that there are no credible threats against the city of Los Angeles at this time.

However, officials say they are preparing for potential violence.

"We have ensured we're prepared for whatever may occur here. As the saying goes, we hope for the best, but prepare for the worst," Alex Villanueva said. "Many of you are wondering if there are any credible threats here in LA County and the answer is no, right now there is no credible threat, but regardless of that, our mission is to act as if there was one, we are prepared."

What does that mean?

Law enforcement officials have their officers in uniform patrolling and on 24/7 shifts. 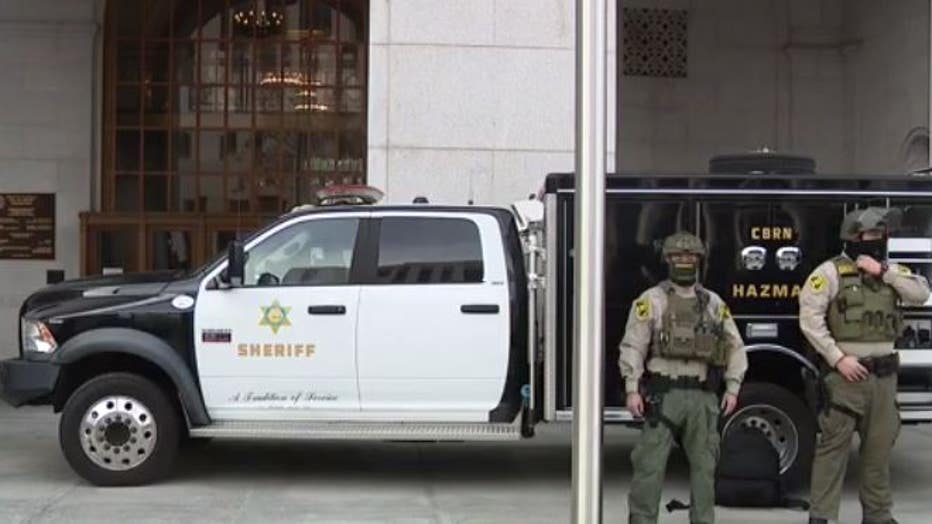 There are 200 National Guard soldiers stationed in Los Alamitos and are on standby in case anything happens.

Mayor Garcetti says, "There are no plans to deploy them."

"I want to be very clear, if you are planning violence here in Los Angeles, you will be stopped, you will be prosecuted and you will pay the price," Mayor Garcetti said. "We are prepared to maintain order and to protect our city."

Chief Michel Moore says there are three known demonstrations planned in LA on Wednesday and all are expected to be peaceful.

"We’ve been monitoring the approaching inauguration now for some months and while we’re all deeply disturbed, traumatized by the attacks on our nation's capital on the 6th, it only blended into the overall planning for this event tomorrow. You cannot defend everything, what I ask is what I said earlier, we need the eyes and ears of all Angelenos," Moore said.

Officials are also asking everyone to watch the inauguration from home due to the COVID-19 pandemic.